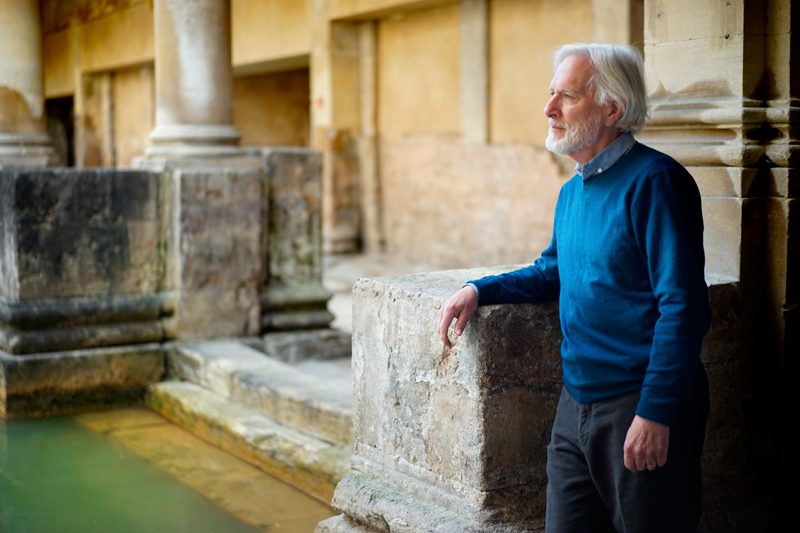 Peter Davenport has spent 40 years working as an archaeologist in and around Bath and has been involved in some of the most important excavations this city has seen. In his latest book, Roman Bath, he explains how our understanding of the Roman period has been greatly improved thanks to new technology, techniques, and planning regulations. Millie Bruce-Watt speaks to Davenport about the extraordinary revelations of the last four decades

The Roman city of Aquae Sulis, known today as the city of Bath, was once the shrine of Sulis Minerva. Sulis, the Celtic goddess of healing and sacred water, was conflated with the Roman goddess, Minerva, the goddess of wisdom, which led to the city’s Roman name. The urban settlement of Aquae Sulis emerged in the first few decades of Roman Britain and was home to the only hot spring in the British Isles. For the next 400 years, the spring-fed baths and the temple were in constant use by locals and visitors alike. However, less than a century after the collapse of the Roman empire, the city was in ruin.

Fast forward to 1727. A group of workers discovered a gilded bronze head of Minerva while digging a sewer trench along Stall Street. This discovery kickstarted what has been coined the “three-hundred-year dig”, with archaeologists working tirelessly to uncover and understand the city that lay deep beneath our own.

In 1980, Peter Davenport was brought to Bath by his professor, Barry Cunliffe. Cunliffe was Professor of European Prehistory at Oxford and director of the Bath Archaeological Trust. In 1985, Davenport and Cunliffe wrote a book about their work excavating the temple precinct lying beneath the Pump Room and exploring the nearby sacred spring. Together they published the spectacular results in their book The Temple of Sulis Minerva at Bath (1985). In the near 40 years following the temple excavation, Davenport has continued to play an active role in the archaeology of Bath and worked as the senior archaeologist at Bath Archaeological Trust up until its closure in 2005. “We did just about every excavation in Bath in that period,” he says.

During Davenport’s career, a great deal has come to light, leading to new interpretations of how the Romans once lived. Cunliffe made his work and some later finds more available to the general reader and published the third edition of Roman Bath Discovered in 2000. Since then, however, several important excavations have taken place, along with some re-evaluation of older work, meaning an updated report was very much needed.

This brings us to 2021. Davenport – now a semi-retired archaeologist – is set to publish his latest book, Roman Bath: A New History and Archaeology of Aquae Sulis, this month. He refers to the publication as the “latest interim report” in the “three-hundred-year dig”, a phrase originally coined by the manager of the Roman Baths and Pump Room, Stephen Clews, highlighting the fact that the discovery is a continuous process – one which will never be completed. “Archaeology is one of those things that goes out of date very quickly,” says Davenport. “But it continues to shape our ideas.”

Throughout Roman Bath, Davenport eloquently tells the story of the town of Aquae Sulis and unpacks a series of new and surprising discoveries that have been made over the last forty years. He documents the most recent discoveries on Walcot Street and details the revelation that the Roman city where people worked, shopped and lived did not actually surround the baths, as previously thought. “The centre of Roman Bath was a monumental religious centre, full of grand buildings. The town where people lived was further out,” explains Davenport. “I think that completely changed our understanding of what Roman Bath had been like.”

Throughout this gripping read, Davenport details a whole host of astonishing discoveries from the last four decades. One notable study was conducted on the paving surrounding the Roman Baths themselves. Archaeologists realised that despite many millions of people entering the baths over the last 100 years – on average 1.3 million people a year – there has been little to no wear, only polish from people’s shoes. The paving, however, is heavily worn. As the Romans would have been barefoot while using the baths, this heavy wear indicates that the damage must have been caused after the collapse of the empire when people were walking around in heavy outdoor boots. “It’s another little hint that the Roman Baths were not being used as baths but were still in use for something else,” says Davenport. “There was still activity going on. We’re talking about the end of Roman Britain, we’re not talking about a desert with no people. There’s just a change, the Romans have gone, the administration has changed, the economy might have collapsed but people are still living. The end of Roman Britain is a fascinating period because we know so little about it. We have a few odd historical references and we know certain things happened but we don’t really understand the process. Archaeology is probably the only way we’re going to get it.”

The last 30 years, in particular, have seen an influx in new discoveries and updated information for many reasons, including the evolution of technology, the introduction of new techniques, and the change in planning regulations. Since the 1990s, there has been some sort of archaeological investigation almost every year. Just recently, on Bathwick Street, substantial Roman buildings and streets were discovered in an excavation under a new block of flats.

“Much to everyone’s surprise, they found archaeology dating from quite early on in the Roman period. That was an area where we didn’t think that there would be what you might call ‘town’ and this was ‘town’,” says Davenport. “There’s been a lot of work, not just in Britain but especially in Britain, in the last 30 years since the planning regulations changed in 1990. Excavation techniques are getting better, we’re still discovering new dating techniques and especially new technology,” he adds. “For example, up until 10–15 years ago it was sort of a guess as to what pottery was being used for. Now there’s technology which tells us what was being cooked or used in these pots because it leaves molecular traces in the fabric of the pottery. You can actually study it and say ‘well, they were boiling cabbage, they were cooking lamb’ – it’s quite astonishing.”

With technology granting a more enhanced excavation and a safe digital storing of records, archaeologists have been able to question and revise the theories that have been suggested over the last three centuries. Davenport’s Roman Bath gives an extraordinary narration of the growth of our understanding; pays tribute to the many who have long laboured in severe conditions to explore and rescue the lost secrets of the ancient world; and poignantly passes on the torch to the next generation, who will undoubtedly further our knowledge of the Roman city buried beneath our feet. Ultimately, Davenport’s Roman Bath is a fascinating read packed full of remarkable revelations.

Roman Bath; The History Press Ltd; set for publication in May. Available to buy from the Roman Baths Museum and available online.

Peter Davenport wrote his last book Medieval Bath Uncovered in 2002. The book follows the reconstruction of the city around its convent and monastery and, later, its abbey.