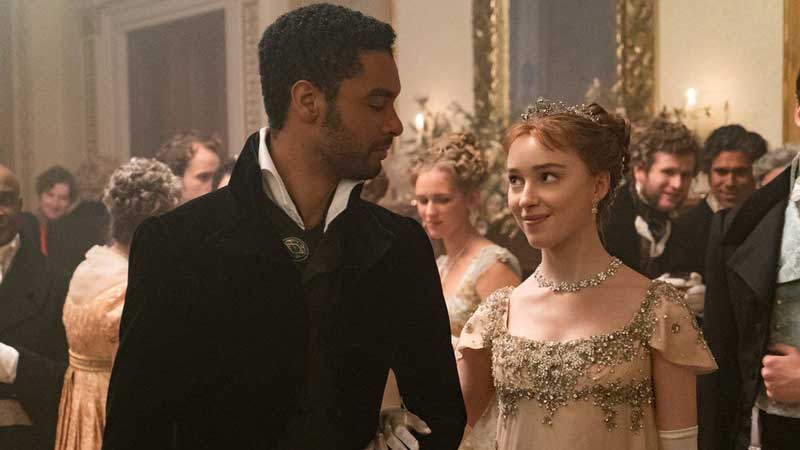 The sounds of Bridgerton

Spotting locations in Bath while following Georgian period drama Bridgerton has kept us pleasantly entertained since it recently arrived on Netflix. Now it’s time to make some familiar connections with the soundtrack, which, Emma Clegg discovers, includes some seriously modern musical influences, from Taylor Swift to Billie Eilish.

The drama Bridgerton has taken us by storm in lockdown. Of course we’re particularly fond of Georgian dramas because our city offers a perfect location backdrop, and since its launch on Christmas Day the series has become an addictive opportunity for us to location spot as we follow the action. This means we can see straight through the scene where Daphne Bridgerton gallops on a horse along the Royal Crescent (let’s hope B&NES were notified), cloak billowing behind her, to prevent her brother and sweetheart Duke from starting a fatal duel in the woodland grounds surrounding the University of Bath in Claverton, where she arrives a few seconds later.

More than this, the series – based on the books of Julia Quinn, produced by Shonda Rhimes and written by Chris Van Dusen – has given us Georgian romance and intrigue in abundance, with more sexually explicit content than is strictly traditional, aptly dubbed Romp and Circumstance by The Guardian. It has upped the ante, cranking up the style of previous adaptations set in this time by authors such as Austen and Heyer. It also brings diversity with a number of black actors cast in leading roles, which feels refreshingly modern as well as true to the ethnically diverse era, a fact not represented in Austen’s books and most often overlooked by Georgian dramas.

Another element that has given fresh blood to Bridgerton is the choice of music, which goes beyond of-the-period classical choices, borrowing from popular contemporary sounds. Take Episode 1 and the piece played by the small orchestra in the first ballroom scene – when Anthony Bridgerton (Jonathan Bailey) escorts sister Daphne (Phoebe Dynevor) through Queen Charlotte’s Ball – it’s a classical rendition of Thank U, Next by Ariana Grande. This choice is not random – the title refers to the social expectations of the era where parents offered their daughters on the marriage market and men eyed them up as potential spouses/trophies, assessing their beauty and material worth. It’s not quite how Ariana meant her lyrics (her song is about lessons learnt from her exes), but the meaning flips round effectively. The lyrics are implied, but they are there and they resonate.

The lyrics are implied, but they are there and they resonate

Other modern music that has been reinvented instrumentally in Bridgerton includes Taylor Swift’s Wildest Dreams from her album 1989 (“Say you’ll see me again even if it’s just in your wildest dreams”); Maroon 5’s Girls Like You from 2017 (“I need a girl like you, yeah yeah”); Billie Eilish’s 2019 Bad Guy (“I like it when you take control even if you know that you don’t own me”); Shawn Mendes’ In My Blood from 2018 (“Keep telling me that it gets better. Does it ever?”); and Celeste’s 2019 Strange (“Isn’t it strange? How people can change. From strangers to friends. Friends into lovers. And strangers again.”). The lyrics are up to date, and they fit with the universal themes of love and marriage played out in Bridgerton.

While these familiar songs are disguised in instrumental form, the raw emotion and the modern crowd power of the choices break through, in each case adding a notable extra dimension to the scene. These are age-old stories of love, connection and relationships and the endless things that get in the way; whether it’s a mother wanting to secure her child’s future with an eligible suitor, a daughter’s wedding hopes swallowed up by her father gambling, or a young woman’s conviction that marriage might not be everything, they are human stories, they are our stories – and we recognise them in the music.

While these familiar songs are disguised in instrumental form, the raw emotion and the modern crowd power of the choices break through

Vitamin String Quartet, an American ensemble formed in the late 90s who specialise in classical covers, have provided the majority of the classical versions of the Ariana Grande, Billie Eilish and Maroon 5 songs. The ensemble have reported a 350% increase in the number of people streaming their work since the show was released. So, conceived as a period piece with a modern connection, the choices of music in Bridgerton have enhanced this and have also played to the advantage of all those who took part.

Using classical covers with no lyrics was a creative strategy to give audiences an intuitive recognition of the music. Hearing a familiar tune, in this case out of context, creates emotional connections, and will add layers of meaning when the lyrics are recalled. “It was the twist of hearing those covers that the audience might not recognise right away. It might take a beat,” says Bridgerton’s music supervisor Alexandra Patsavas. She also refers to how the music choices and their respective placements within the drama are each very deliberate, and that the Grande and Swift covers “were able to tell the musical story and amplify a female perspective”.

Selecting sources is just the beginning of the musical process, which for Bridgerton was followed through by Emmy-winning composer Kris Bowers. He created demos to be realised by an orchestra before the finished cues were cut to picture. The added factor of a pandemic saw Bowers working with musicians remotely from their own home studios, followed up by mixing and editing to create the finished product.

The only song with lyrics in Bridgerton’s soundtrack is a memorable one, The End by relatively unknown singer JPOLND, who only brought her first album out in 2017. The song has proved a massive hit, despite not being included on Netflix’s official Bridgerton playlist, streaming more than 1 million times on Spotify in less than a month. It plays in Episode 6, during a sex scene with Daphne and Simon where she – having only just discovered, well after her marriage night, exactly how babies are made – prevents him from withdrawing. This scene has led to controversy, with accusations of marital rape from viewers. Whatever the conclusions, we think this may be JPOLND’s big break.

Not all the music has contemporary roots. Episode 4 sees 20th-century Russian composer Dmitiri Shostakovich’s Second Waltz and the classic aria Belle nuit, ô nuit d’amour from Offenbach’s The Tales of Hoffmann. Both these numbers were composed after the period in question, so form an authentic part of the ingenious soundtrack mash-up. The only exception to this is in Episode 7 with Vivaldi’s The Four Seasons, which predates Bridgerton by a century.

So it’s a simple formula. Take a early 18th-century period drama about the British aristocracy and imagine a family with eight children named from A to H. Cast it in an ethnically diverse way, add a soap storyline but replace cups of tea with embroidery, unmarried mothers with out-of-marriage pregnancies and street crime incidents with duels. Add a mystery letter-writing society gossip voiced by Julie Andrews, bring in some seriously good corsets and dresses, a louche gentleman’s life-drawing club, and make the most of any sexual action. The final pervasive ingredient in order to create a relevant connection to a modern audience is to hype it up with some modern music craftily disguised as classical. And then you’ll see the drama through a modern lens. As Celeste says in Strange, “I am still me. You are still you, in the same place. Isn’t it strange?”

Thank U, Next, by Ariana Grande, played by Vitamin String Quartet, plays in the first episode of Bridgerton in the background of the first ball of the season as Daphne’s brother Anthony is moving his sister swiftly on from suitor to suitor.

Girls Like You by Maroon 5, also by Vitamin String Quintet, plays in the first episode when all the eligible men shift their focus from Daphne to Marina Thompson, after being spurned by Anthony on his sister’s behalf.

In My Blood by Shawn Mendes (his 2018 Grammy nominated track), by Vitamin String Quartet, features near the end of the second episode where Daphne and Simon dance together as part of their plot to improve Daphne’s social standing and shift attention away from Simon.

Bad Guy by Billie Eilish (a 2019 Grammy winner), by Vitamin String Quartet, is encountered in episode three when Daphne and Simon have established a rapport and are enjoying their pretence of parading as a couple. The jealous outburst from Simon as he challenges another suitor fits perfectly with the original’s lyric.

Love Yourself (Short Reprise) by Sufjan Stevens makes it into the soundtrack in its original form. It plays in the fifth episode, during Daphne and Simon’s wedding scene.

Strange is the 2019 song by British singer-songwriter Celeste, performed here by Kris Bowers. It plays in episode five, during a rather intimate moment in Daphne and Simon’s relationship.

Wildest Dreams by Taylor Swift, from her 2014 album 1989, is featured in the sixth episode of the season, as a string arrangement by Duomo. It plays while Daphne and Simon experiment with various locations in which to have sex. Including on the steps of a mausoleum.

The End by JPOLND, the only other original track and the only one with lyrics, is heard at the end of episode six. Uplifting and intense, it plays during one of the most controversial moments where Daphne takes charge during a sex scene, which has since led to debates about sexual consent within marriage.