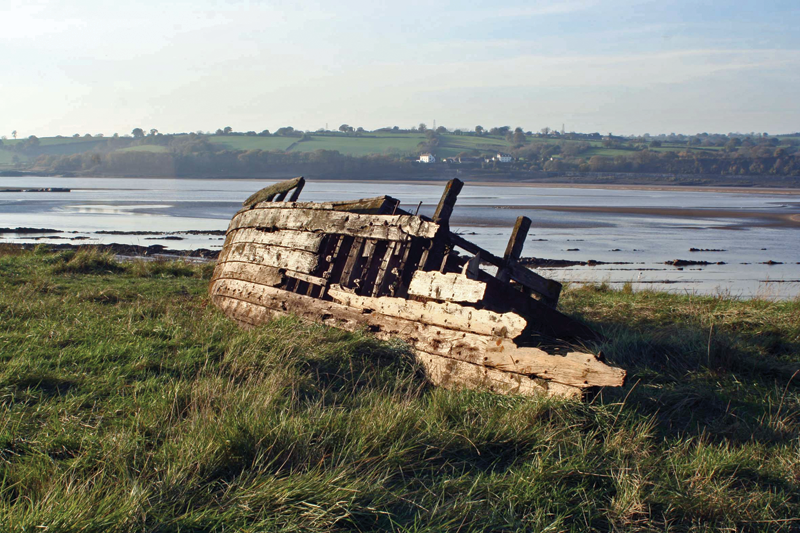 Andrew Swift visits the site of dozens of wrecks at Purton in Gloucestershire, which locals are fighting to preserve

A relatively short walk for what can be a wet month, which traverses terrain that is both flat and relatively mud free. Boring, however, it isn’t, for in the space of two miles you get to see the largest collection of maritime wrecks above water in Britain, walk along the towpath of a ship canal with Regency-style bridge-keeper’s cottages, and visit the monumental remains of one of Britain’s longest railway bridges.

On top of that, you can enjoy a succession of vistas across the shifting sands of the Severn estuary – alive with migrating birds at this time of year – while for lunch there is a choice of nearby hostelries – one of them voted national pub of the year in 2014.

Some readers will by now have worked out that I am talking about the Ship’s Graveyard alongside the Gloucestershire and Sharpness Canal at Purton. This extraordinary site has been the subject of media attention over recent years because the barges and sea-going vessels beached here between 1909 and 1965 are under threat. An organisation – the Friends of Purton – has been formed to conserve what survives, but, faced with the ravages of time, tide – and the destructive hand of man – they can only do so much. The sooner you go, the more there will be left to see.

And don’t worry if you are not an expert in maritime archaeology. Not only do you need no prior knowledge to be inspired by what are commonly referred to as the Purton Hulks, children and dogs are welcome on the site, and will have a whale of a time. That said, you need to ensure they do not go anywhere the river – or, if you visit at low tide, the mud. The upper stretches of the Severn are among the most treacherous waterways in the world, with their shifting currents, serpentine curves, mudbanks and fast-flowing tides. It was to by-pass them that a ship canal was built from Sharpness to Gloucester in 1827. That canal, whose towpath the walk follows, is still busy today. In the early 20th century, however, its future was cast in doubt as continued erosion from the river threatened to undermine it. Desperate times called for desperate measures, and in 1909 the canal’s chief engineer came up with an extraordinary idea. Redundant barges, trows and schooners were towed upstream and cast adrift to run into the river bank when the tide was running at its height. As the beached boats gradually filled with silt, more boats were piled in on top of them, raising the ground level and stabilising the bank.

The canal was saved, and eventually 81 vessels ended up here – a fascinating collection of rusting and crumbling hulks dating back to the mid-19th century. They include the last surviving Kennet barge, built at Honeystreet on the Kennet and Avon Canal in 1905, the schooner Katherine Ellen, impounded in 1921 for running guns to the IRA, and concrete barges built in the Second World War when wood and steel were in short supply.

As for that bridge I mentioned earlier – on the night of 25 October 1960 two barges, loaded with oil and petrol, heading up the Severn in thick fog, missed the entrance to the canal and collided with a three-quarter-mile long railway bridge which spanned the river. In the ensuing conflagration, five men died and part of the bridge collapsed.

The bridge, built in 1879, was a useful diversionary route when the Severn Tunnel was closed, and, as rebuilding costs were estimated at £312,000, against £250,000 to dismantle it, plans were drawn up to reinstate it. Before work started, however, another vessel collided with the bridge, causing further damage, and it was decided to dismantle it. All that remains, apart from the footings of the piers – still visible, along with the wrecks of the barges, at low tide – are an abutment and a tower which supported a swing bridge over the canal.

To get to Purton, head north on the M5, leaving at junction 14 and continuing north on the A38 for five miles, before turning left along a road signposted to Breadstone, Halmore and Purton. After another 1,000 metres, the approach to the remains of the bridge is heralded by a copse of mature trees – now in their late autumn glory – on the far bank of the canal. A tall abutment soon comes into view, followed by the circular tower that supported a swing bridge.

From here, turn to head back along the towpath. After passing the remains of the bridge, carry on for 500m before bearing left down steps by an information board to visit the area where most of the hulks are to be found. After another 500m, the path leads back to the towpath from where it is a short step back to the car park.

– Refreshments: The Tudor Arms at Slimbridge, GL2 7BP which serves food all day and the Salutation at Ham, GL13 9QH a mile west of Berkeley, was voted CAMRA Pub of the Year 2014. It serves food noon to 2pm, Tuesday to Sunday