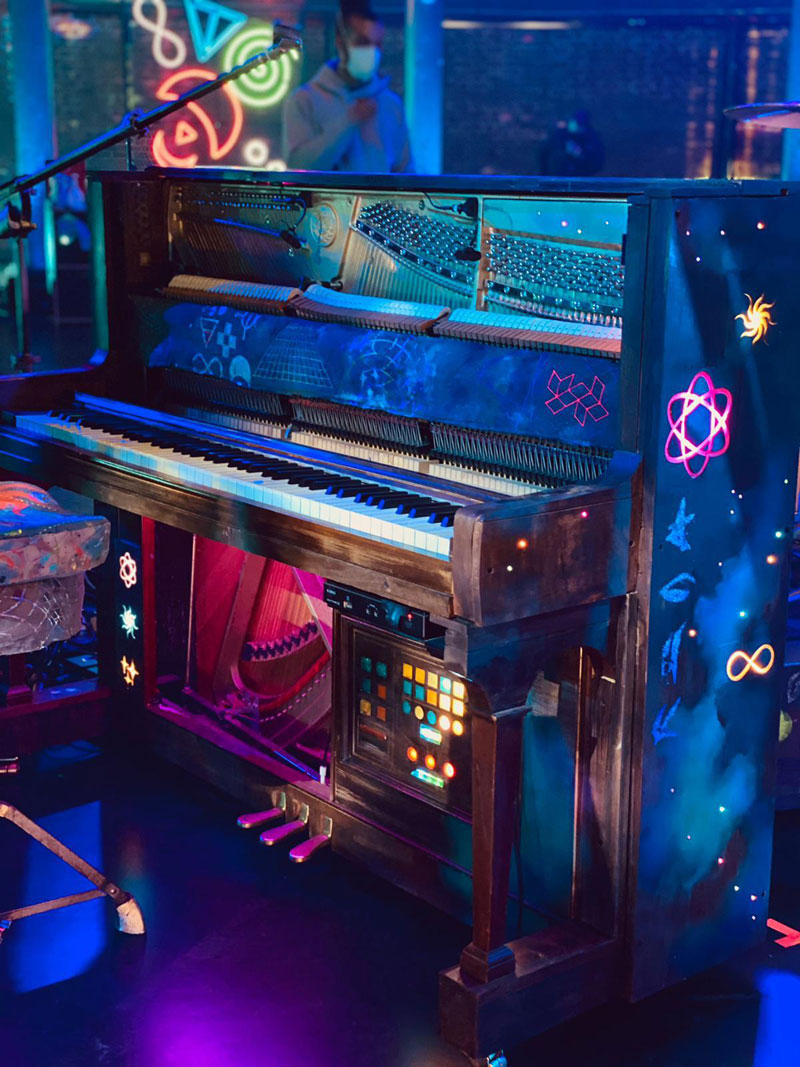 The Piano Shop Bath: beyond the limits

From Coldplay to Peter Gabriel, The Piano Shop Bath has been offering its services to some of the world’s most iconic musicians for almost 40 years. Millie Bruce-Watt catches up with owner Jon Kelly, whose creativity knows no bounds

Pushing the boundaries in design and innovation, The Piano Shop Bath has been one of the city’s most-treasured independents for almost four decades. Its striking window display, vast showroom space, and desire to be brave and bold has not only caught the eye of local admirers but some of the world’s highly regarded creatives, including former Genesis frontman Peter Gabriel, and internationally renowned production designer, Misty Buckley.

This month, we caught up with owner Jon Kelly, who told us all about the joy of working with artistic geniuses helping to change the outdated perceptions of a remarkable instrument.

“We want people to engage with the piano, we want to inspire the next generation,” says Jon. “There are a lot of older perceptions of pianos – they’re awkward to play, they’re heavy to move, they’re brown, they’re black and they are very dominant in space and we’re proving that that’s not the case now.”

Jon took over the shop from his father 10 years ago, who had moved the business from Widcombe to the busy London Road. Jon has poured an immense amount of time and effort into the workshop, converting part of the showroom into a space to rebuild, repair and restore pianos of all shapes and sizes to fit a multitude of special requests. From piano hire for concerts to tuning and storage, no brief is too ambitious for the team.

Over the years, The Piano Shop has continued to attract big name talent, building quite the reputation within the industry. Most notably, the shop looks after the pianos for Peter Gabriel’s Real World Studio, based in Box, which has seen the likes of Amy Winehouse, Beyoncé, Harry Styles, Paul Simon, Tom Jones and Van Morrison walk through its doors. The team also offer their piano tuning services to WOMAD festival and to local venues hosting world-class acts.

Ambitious projects
To date, Jon tells me that their most ambitious projects have been for rock band, Coldplay. After being approached in 2019 by Misty Buckley – whose work includes designs for the 2016 Super Bowl 50 Halftime Show and the 2012 Paralympics’ Closing Ceremony – the team were commissioned to build a number of pianos for the band’s album, Everyday Life. Two years later, and delighted with their first creation, Chris Martin asked if the team, with Misty’s design, would build pianos for some of their latest performance projects, including this year’s virtual Glastonbury Festival and their new album, Music of the Spheres, arriving on 15 October.

“Our aim was to achieve a stripped-back look from recycled pianos, incorporating lighting effects with the band’s latest symbols, embodied within the case and when the keys were played. The project gave us a unique opportunity to collaborate with an inspiring group of artists and creatives. The instruments took circa a month to build – with a lot of late nights – but it was really rewarding to see it on stage. It’s a relief and it’s a celebration to see the end results in context. It was a real credit to the business to be approached by Misty – she is at the top of her game and such an inspiration.”

The Coldplay project accentuated The Piano Shop’s desire to be creative with the instrument’s traditional look. The team actively and regularly seek out local artists who are eager to push the boundaries in design. “What we do, what sets us apart, is that we work a lot with the aesthetics. Pianos are always perceived to look a certain way but now – and we were the first to do this in the UK – we can tailor them to the customer’s interior space. We’ve worked with Bristol graffiti artist, Andy Council, and textile designer, Sue Bradley, who helped us cover a piano in jungle material – the collaboration element is really energising.”

A rabbit warren of show space
Separate to the workshop is the showroom, where Steinways, Yamahas and Kawai grand pianos sit in wait. From digital to acoustic and everything in between, The Piano Shop offers the very best in the business. Upholding the integrity of the instrument is of utmost importance and Jon has recently welcomed Bath-based concert pianist Nurry Lee to the team. “We profile a lot of our pianos with Nurry – she is just an incredible pianist, she really is going places. We’re hoping to do a concert and Q&A with her later this year at a local venue to really show off her talents.”

Giving back locally
Over the years, Jon and the team have made it their mission to give back to the community, nurturing young and emerging talent. From donating a piano to a local primary school, sponsoring a young pianist or helping a student’s studies, The Piano Shop are committed to giving back locally. “I think it’s the way forward – the businesses that are putting back into the community are really thriving.”

From a local commitment to a global commitment, Jon is soon introducing initiatives to help reduce waste and better the business’s impact on the environment. Chris Martin’s piano was made entirely from sustainable products including recycled plexiglass, which acted as a waterproof sealant. “We recycle a lot of pianos and 95% of the material is reused, but now we are looking to use the material to create more interesting things – watch this space,” he hints.

As the business continues to go from strength to strength, Jon alludes to the team’s latest project of which the client’s name is very much under wraps. “He doesn’t want the standard so we have had to source an Abbey Road piano for him – a very distinctive piano that The Beatles worked with. It’s an upright, it’s quite a retro-looking piano but the client wants a yellow submarine design all over it. We will collaborate with artists and our design team to create something really special. It’s these kinds of projects that just inspire us as a team to keep doing creative things.”

Open six days a week, The Piano Shop is currently operating on an appointment basis but will welcome drop-ins. Once fully reopened, they will continue to run piano lessons for all ages and abilities, encouraging people to expand their musical horizons and discover the wonderful and extraordinary world of music.