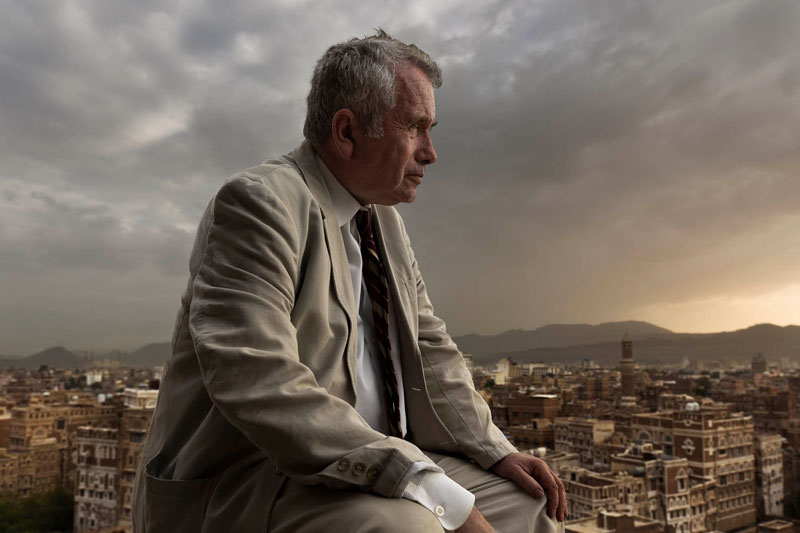 The man in the white suit: in conversation with foreign affairs correspondent Martin Bell

In over 30 years as a foreign affairs correspondent, Martin Bell saw major changes in the way news was reported. Emma Clegg asks about his time as a reporter, as an MP and as a UNICEF ambassador, ahead of his arrival at The Bath Festival.

What’s the difference between a brigade and a battalion? Martin Bell OBE knew the answer to this when he worked as a broadcast war reporter in the 1960s. Born in 1938, Bell was one of the last in the UK to be called up for compulsory two-year national service, serving in Cyprus during the Greek Cypriot War of Independence. “It was a very good training because they taught you fieldcraft, which is how to stay alive in dangerous places, and how to operate in a small team, which is what I was doing in my later years in Bosnia.”

Bell had a distinguished career as a foreign affairs correspondent – over 30 years he covered 11 conflicts and reported from 80 countries, among them Vietnam, the Middle East, Nigeria, Angola and Northern Ireland. He saw many changes, both technical and operational, in this time. “I had two assignments in Vietnam in 1967 and 1972 – we just shot the raw footage with a recorded commentary, wrapped the cans of film in an onion bag so customs and security could see what they were, and shipped them to London. It would be anything up to four days old by the time it was used.”

Another transition came with the introduction of colour film. “We moved from black and white to colour film around 1969. Prior to that, in any field of conflict blood was always seen as black. Suddenly colour comes in and blood is red. The BBC started flinching from the portrayal of real-world violence and there was a limit to what we were allowed to show, especially in the Balkan Wars.”

In the mid-1990s Bell developed a style of reporting that he called the “journalism of attachment”, one that rejects rigid neutrality, that “cares as well as knows”. Journalists, he felt, had a new moral obligation to distinguish between ‘good’ and ‘evil’ in conflict zones, and to express an attachment to the ‘good’ side. “It struck me after three and a half years of the Bosnian War that there was no obligation to be impartial between the armed and the unarmed and the victim and the aggressor. What I suggested was not a licence to be opinionated, but a freedom from this mechanical balancing act, which was used when I started in the newsroom in the 1960s.”

Referring to the dangers faced by war reporters today, Bell says that the attacks on the Twin Towers in 2001 reorientated the landscape: “Everything changed with 9/11 as, especially in the Middle East, journalists were in danger not just of being caught in the crossfire, but of being targeted, ransomed, kidnapped. There was therefore a retreat from frontline journalism to what I call ‘rooftop journalism’. It’s still very dangerous, but the hazards are of a different order.”

Martin Bell is appearing at The Bath Festival on 15 May where, wearing his trademark white suit, he will look back on the efforts to keep the peace since the end of the Second World War and consider the current political landscape with broadcaster and journalist Mark Lawson. His astute judgement on matters of war will also be applied to the conflict in Ukraine – on which he endorses both the style of the BBC coverage and the support NATO is giving Ukraine: “You’re dealing with a very volatile and unpredictable individual in the Kremlin. I think we’re doing the right thing in giving the Ukrainians the wherewithal to fight back.”

Bell famously left the BBC in 1997 to stand as an independent candidate in the Tatton constituency in Cheshire, one of the safest Conservative seats in the country, where the sitting MP Neil Hamilton was embroiled in sleaze allegations. The Labour and Liberal Democrat parties withdrew their candidates in Bell’s favour and he was elected as an MP, overturning a Conservative majority of over 22,000.

Bell’s tenure as an MP brought new challenges: “I had encountered ambushes from Biafra to Bosnia – but nothing like the one on Knutsford Heath when the Hamiltons confronted me (wearing my trademark white suit) before the press, demanding, among other things, whether I ‘accepted that he was innocent’.

“I went into the House of Commons as a political romantic – you walk in past these statues of great parliamentarians and you think ‘wow’, and then you get inside the chamber and you think, ‘Is this the best we can do?’.” But Bell had the advantage of being an independent: “Every vote I cast over those four years was a free vote – I was my own chief whip so to speak.”

Bell – who describes himself as a “dinosaur”, having never used a computer in his entire career with the BBC – sees the internet as a dangerous force in news reporting: “It is very easy to spread disinformation simply by repeating lies on the internet. I sometimes think what a field day Goebbels would have had if the internet had existed in those days. I make a point of visiting the websites of [Russian news agencies] Tass and Pravda and it’s extraordinary what they are saying when the facts of the situation are so very clear.”

After he left the House of Commons in 2001, Bell was appointed UNICEF UK Ambassador for Humanitarian Emergencies. In recent years this has involved producing TV appeals. “It’s a great honour. The one I did in 2021 about the Civil War in Yemen has raised over a million pounds, so people are very generous. It’s an area where you are convinced you are doing good.”

Bell dispensed with his television two years ago, but is still a stalwart news follower on his laptop. “I regret watching the news as much as I do and I’m still fairly addicted.” Moreover his work with UNICEF UK highlighted conflicts that were not being reported in the Western press and this concerns him. “There are now wars raging, especially in Africa, of which we know absolutely nothing because there is no coverage. I went back to Africa as an ambassador for UNICEF UK and they showed me what was going on in the Democratic Republic of Congo (DRC) in Darfour, Sudan, Yemen and Somalia, and in all these places I only ever met one journalist. The British media have averted their eyes, especially now when all the attention is on Ukraine. There is a desperate war going on in Yemen, but we get no coverage of it at all. Africa has literally become a dark continent – no light is being shed on it.”

All conflicts, however, will be under the spotlight using Martin’s Bell particular brand of light on 15 May.