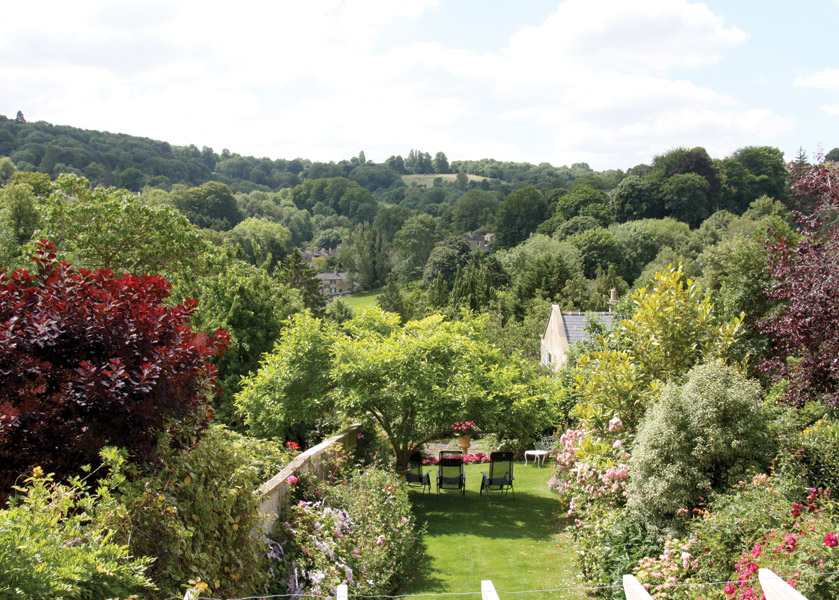 The lost pleasures of Lyncombe

Kirsten Elliott takes a walk in Lyncombe Vale and encounters what used to be its three pleasure gardens. The route passes the site of Spring Gardens, one of the most successful of the three, and takes in some breathtaking views

During its Georgian heyday, Bath’s pleasure gardens were among the glories of the city. Originally quiet places to walk for exercise and gentle refreshment, they slowly transformed into fantasy worlds. With their groves and grottoes, fêtes and fireworks, they mingled artifice and nature to create a world of magical illusion. Along their tree-lined, lamp-lit avenues, well-heeled visitors sought refuge from the dusty streets. Perhaps the most astonishing aspect was the sheer number and diversity of these hedonistic havens.

Many had swings among their attractions, but swinging was strictly forbidden on Sundays. Most were within easy reach of the city centre but there were also three pleasure gardens in Lyncombe, which we visit in this walk. En route, you will pass the site of Spring Gardens, which offers some breathtaking views.

The walk begins in Laura Place. Walk up Argyle Street, past the Boater, and descend the steps just before the bridge down to the river. Head south, passing the Beazer Maze and the Recreation Ground. From 1737 to 1798 this was the site of Spring Gardens, famous for its public breakfasts, concerts and its firework displays, attended by thousands.

On the other side of the river is the present day Parade Gardens, once the earliest of Bath’s gardens, associated with the Assembly Rooms which stood here.

Follow the riverside path southwards, passing the end of South Parade, from where steps descended to the ferry. On your left is the cricket ground, where there was a small pleasure garden in the early 19th century known as Waterloo Gardens. We know little about them, apart from that they were small, cost three pence to enter and had a swing.

Continue along the riverside path, under North Parade and the railway bridges, and after crossing the canal head up to Rossiter Road. Turn right until you reach the second set of pedestrian lights, cross Rossiter Road and Claverton Street, head right, passing the former toilets, and turn left up Lyncombe Hill. This steep hill was the original route to Lyncombe Vale. As you climb, notice the varied architecture – elegant late Georgian villas, miniature castles, and Victorians boldly introducing brick – and look out for glimpses across the valley to the left.

At the crossroads, go straight across to pass Rosemount Farm, and descend Lyncombe Vale Road towards Lyncombe Spa – now the Paragon School. Turn right and the school building comes into view. A spring whose waters turned brandy deep purple was discovered here in 1737. By 1742 this house was erected as lodgings for those taking the waters, with a small extension on the east side as the pump room. Although some historians say it was not a true pleasure garden as it did not have events, in many ways, with its spring and formal grounds, it was close to the original notion of gardens as part of a healthy regime. Occasionally there was music, it was licensed for alcohol, and supplied food to visitors. Today, the spring feeds a gravity-driven fountain, while an overflow gushes out from the wall.

The spa was sold in 1767 to William Street, an apothecary, who ran it with his partner David Kinneir as a sanatorium where people could be inoculated against smallpox. This entailed suffering a mild dose of smallpox, which deterred people from using the spa. By 1773 Street had converted it to his private residence, calling it Lyncombe House, where he lived until his death in 1785. The buildings nearest to you were the stables and coach houses.

West of the spa, on the opposite side of the road, is the site of another pleasure garden, King’s James’s Palace. In 1724, Captain Peter Drake came to Bath to meet entrepreneurs to advise them on setting up gaming tables.

He was taken to dine with them “at a thatched Cabbin, within a Mile of the Town, called King James’s Palace.” However, in 1777, Charles Waters set up a pleasure garden here, where drinks could be served, and dinners supplied. In addition “a great variety of flowers, flower-roots, shrubs, plants etc” were for sale. It was reached by a new carriage road running alongside the Lyn Brook, now Lyncombe Vale. Its popularity was largely due to the air of tranquility and respectability, although Robert Tanner, who ran it from 1790, introduced illuminations and fireworks as well as music. The garden lasted until 1793 before being sold, after Tanner was declared bankrupt.

Head back past Lyncombe House and take the lower road along Lyncombe Vale, taking care on the section with no pavement, before taking the raised pavement beside the Lyn Brook. Jane Austen walked along this “raised narrow footpath” in May 1801, describing the scenery, in a letter to her sister, as “very beautiful”. As the road rises to meet the pavement, a house with a rounded end comes into view. In 1737, John Wicksteed, who ran a toy shop – or gift shop – in Orange Grove, invented a water-driven machine for engraving semi-precious stones. After a short spell in Bathampton, he installed his machine here to supply tourists who had come to admire Ralph Allen’s house at Prior Park being built at the head of the valley, or stare at the tramway, which ran alongside the carriage road, carrying huge blocks of stone to Allens’s wharf.

When Lyncombe Spa closed, John Wicksteed’s son James decided to open these grounds as a pleasure garden which he named the Bagatelle, declaring that he had found a chalybeate – or iron-bearing – spring in the grounds. In addition to bathing in a specially built canal supplied by the spring, there were public breakfasts, music and dancing, organised by friends of Richard Sheridan, who ran the Bagatelle for Wicksteed. In September 1773, for example, they “exhibited each morning gratis, the Rise and Fall of the Chalybeate Water at the Bagatelle, with proepilogical Songs on the occasion, sung by poor William the gardener.” Unfortunately, poor William was taken ill, so the songs did not take place.

By 1775, perhaps in an attempt to revive its fortunes, the garden was renamed Cupid’s Garden. It then gained a reputation for being disreputable and respectable visitors stopped coming. By 1778, the Bagatelle was no more.

Turn left, following the route of Allen’s tramway, to return to Widcombe where you can choose between seeking refreshment at the White Hart, another of Ralph Allen’s enterprises, or heading back into town, either along the river, or by crossing Halfpenny Bridge towards the station.

You can find out more about Bath’s pleasure gardens in Kirsten Elliott’s latest book, No Swinging on Sundays – the Story of Bath’s Lost Pleasure Gardens by Akeman Press.

– Distance: 2.5 miles
– Time: 1.5 hours
– Level of challenge: On roads but with a steep climb and descent, and with steps at Pulteney Bridge
– Lunch: Large groups should book for lunch at the White Hart, Widcombe; whitehartbath.co.uk