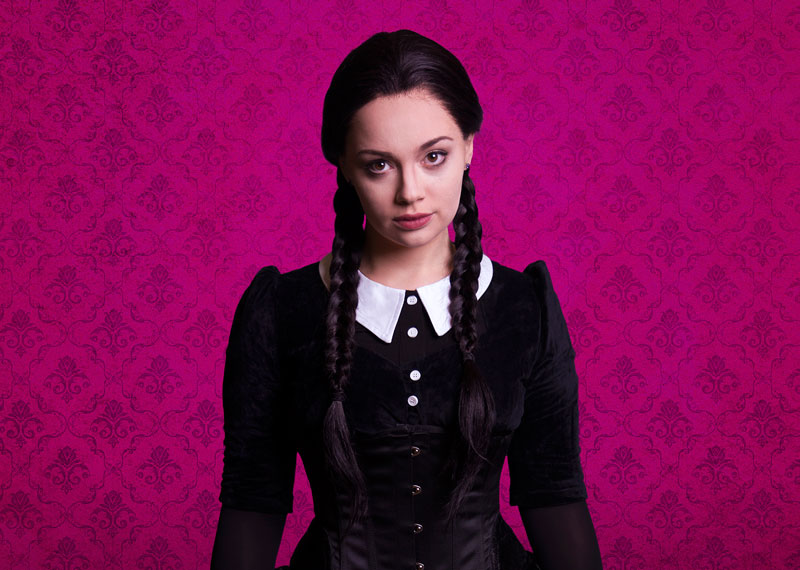 The kookiest kid in town: Interview with Carrie Hope Fletcher

We remember our interview with musical star and internet sensation Carrie Hope Fletcher, who chatted about playing a grown up Wednesday in The Addams Family musical last year. She also shared her top five favourite books… Words by Jessica Hope

Described as an “honorary big sister” by many, at the age of just 24 Carrie Hope Fletcher has enchanted audiences onstage with her incredible voice, given advice to hundreds of thousands of people through her YouTube channel, and made numerous readers laugh and cry with her best-selling books.

In her latest venture, Carrie has taken on her most demanding part to date, playing a grown up Wednesday in the musical version of everyone’s favourite kooky clan, The Addams Family. This production follows 18 year-old Wednesday as she comes to terms with falling in love with – shock horror – an American teenage boy from a respectable family. How will the Addamses be able to handle normal people coming into their lives as the families meet over a fateful dinner?

In the midst of a busy tour schedule I spoke to Carrie, who is from Harrow in London, about what first drew her to this unusual part. “I grew up watching The Addams Family films (released in 1991 and 1993) and my mum loved the 1960s television version, so The Addams Family was always on in our household. I love the dark humour,which is similar to Tim Burton films like The Nightmare Before Christmas and Beetlejuice – I have always enjoyed that kind of genre.”

This part is a world away from other characters Carrie has played in recent years – she performed as Eponine in Les Miserables in the West End and in Dubai, picking up the award for Best Takeover in a Role at the 2014 WhatsOnStage Awards, as well as playing Truly Scrumptious in Chitty Chitty Bang Bang and Jane Banks in Mary Poppins.

“This is certainly the most challenging role I’ve ever played. The physicality of the production has been a test, especially with the corset I have to wear because of all the running around I have to do – trying to control my breathing while wearing it took a few shows to get used to.”

Despite these challenges, Carrie says that the whole cast has thrown themselves into these quirky parts. “I’ve never seen a cast so in love with a show before,” she says. Playing alongside Carrie is ex-EastEnders star Samantha Womack as the iconic family matriarch Morticia, and Coronation Street actor Les Dennis plays the utterly bizarre Uncle Fester. The cast of The Addams Family musical © Matt Martin

Musical sensation Cameron Blakely (Les Miserables, Peter Pan, Oliver!) plays Gomez, who struggles with trying to keep his knowledge of his daughter’s relationship a secret from his beloved wife. “Cameron Blakely is hilarious. We played father and daughter in Les Mis when he was Thenardier, and now he’s playing my dad in this production, so I think we’re meant to play father and daughter forever,” Carrie laughs.

The cast also includes a large ensemble but with a difference. “Each member of the ensemble has their own individual part playing an ancestor of the Addams family,” Carrie tells me. “There is a ballerina and a matador, for example. This is really rare in musicals as the ensemble are usually all dressed the same as villagers or something similar.”

Audiences will fondly remember a young Christina Ricci’s portrayal of the melancholic Wednesday in The Addams Family films from the 1990s. With her familiar pale complexion and long black plaits, Wednesday is a young adult in the musical version, battling her emotions and her affinity to her family and the man she loves. “It is really strange for Wednesday because she’s usually so dark and torturous, and finds nothing better than tormenting her brother. But now she’s confused about being in love as this goes completely against everything dark that she loves and is used to,” says Carrie.

Despite being performed in countries around the world, this is the first time that UK audiences will be treated to the musical as it tours across the country until November. “The good thing about being on tour means you get to perform in a new venue, so the show gets refreshed each time,” she says. “There will be new routes to organise how to get on and off the stage and props put indifferent areas, so the show never gets tired.”

Away from the stage Carrie regularly vlogs (for the uninitiated that’s blogging, but with videos rather than writing) and her YouTube channel, ItsWayPastMyBedTime, has an incredible 640,000 subscribers and her videos have been viewed 97,000,000 times across the world since 2011. Her vlogs cover a variety of topics including music covers, backstage footage of her work in the theatre, and giving advice to her dedicated followers (who call themselves Hopefuls).

“It was a happy mistake that I got into vlogging. I was unemployed and bored, so started doing a cover each month and posting it online and it just snowballed from there. I never knew that there was such a big vlogging community.”

With the surge of video channels like YouTube in recent years, this has allowed younger people more access to celebrities and the chance to get to know their idols on a greater level. And for the stars of the videos, they can engage with their fans and give out advice to their viewers.

But, as we are all too aware, there are the negatives that go hand in hand with these modern developments. Carrie tries to address the anxieties around body image for her young fans in her vlogs and fights back against keyboard warriors who make sly comments or attack others online about the way they look.

“The people who make these cruel comments don’t get to see the affect that it has on someone. I’ve grown a tougher skin than most over the years, but I want to highlight in my videos that if someone said something nasty to someone who wasn’t as tough skinned as I am, then it can have lasting damage.”

Similarly with her first book, All I KnowNow, which was a number one Sunday Times bestseller, Carrie wanted to reassure her readers about those confusing and embarrassing moments that happen in your teenage years. “When I was a teenager, there weren’t any YouTube vloggers who could share those stories with you. So in my book I wanted to share stories about my teenage years that would help me get through those problems if I were that age now.”

Carrie has also brought out two bestselling fictional books and her third one, All That She Can See, will be released in July, all of which address subjects such as heartbreak, mental illness, death and romance – issues that Carrie believes are important to discuss with her readers, young or old. The Miniaturist by Jessie Burton

Usually I can guess where a book is going to go by halfway through, but with this one I couldn’t figure out where it was going. I was completely surprised with how it ended and I absolutely loved it. I became slightly obsessed with the book afterwards

Every Day by David Levithan

This is such a clever book for young adults which tells the story of a soul which has to move to a different body each day in order to survive. But then the soul falls in love and has to spend its life trying to find its way back to the woman it loves.

All My Friends Are Superheroes by Andrew Kaufman

This is my all time favourite book. My favourite superhero in it is The Spooner, whose power is that he knows when someone is in need of a hug. When that person is asleep, he goes into their house, spoons them for the night, and then leaves before they wake up, leaving the person feeling like they’ve had a little bit of comfort and love. This book was given to me by a fan after a performance of Les Mis and I began reading it on the train home and I couldn’t stop reading it. I finished it at around 3am and I held it to my chest and sobbed.

Billy and Me by Giovanna Fletcher

I love this story, and coincidentally it was written by my sister-in-law. It will leave you feeling all warm and fuzzy, and because I know the author, it meant I read it while imagining it in her voice.

This is by one of my friends (and fellowYouTube vlogger) and I’m reading the preview of it now. It is out in June and I’m absolutely loving it.

Shape Of You by Ed Sheeran

I know it seems really conventional to choose something by Ed Sheeran, but I’m obsessed with this song because it’s such an ear worm and so catchy. It just makes you want to dance whenever you hear it.

High Hopes by The Vamps

Again, coincidentally, this song was written by my brother (Mcfly’s Tom Fletcher), and I love it because it has such a summery feel.

How Far I’ll Go from the film Moana

I watched Moana while flying to Florida and I cried on the plane watching it. This is a Disney film about a young, strong girl finding her way, and it’s such a refreshing take on a female Disney character.

You Matter To Me from the musical Waitress

I can’t stop listening to the soundtrack to this musical and this duet is beautiful. It’s quite anew musical to Broadway, but I hope it comes to the West End soon.

Hawaiian Roller Coaster Ride from the film Lilo and Stitch

This is by far my most played song on my laptop – I think the last time I checked it had been played around 428 times. It just makes you feel good whenever you listen to it, and I sometimes play it on a loop when I’m cleaning my house.