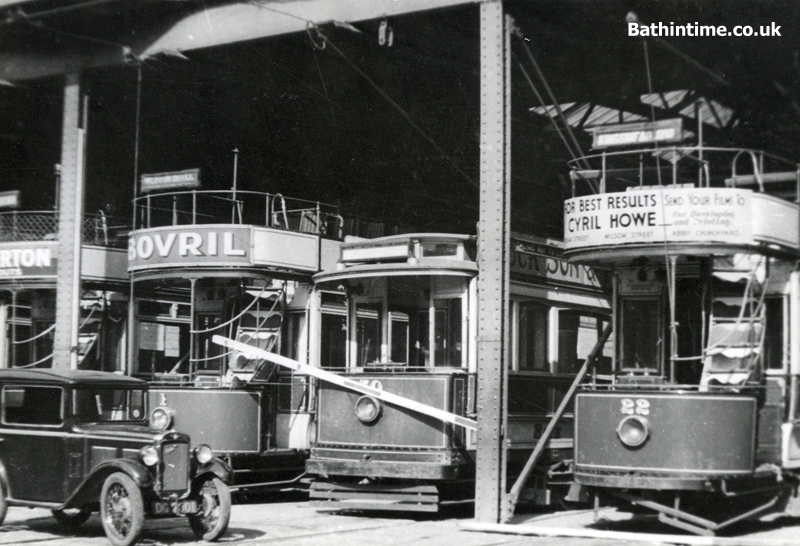 The history of trams in Bath

As the idea of introducing a modern tram system in Bath is under discussion, Georgette McCready looks back at the decades when trams were the main form of transport for Bath

There is much talk around a plan to install a modern tram system in Bath to alleviate air pollution and traffic problems. But before anyone can jump up and down about such a transport network being inappropriate for our historic city, let’s remind ourselves that for almost 40 years the city had a thriving tram system used daily by hundreds of people.

The earliest trams, operated by the Bath Tramways Company, were pulled by horses. Drivers wore smart uniforms and hats and the tickets were sold and checked by conductors, many of them little more than schoolboys. The headquarters were at the Porter Butt Hotel on London Road, with stables for the horses behind the hotel. The tracks were set into the roads and the first route – from what is now Bath Spa railway station, through the High Street, along Walcot Street to Grosvenor – was formally opened by the city mayor on Christmas Eve in 1880.

Sadly, within four years the horse-drawn service failed to make a profit and the business changed hands twice, until in 1902 the company was taken over by the Bath Corporation, which put the laying of more tracks and the electrification of the network into the hands of the Bath Electric Tramways Company. So the golden age of Bath trams was launched.

There was no doubt that the city needed a reliable public transport system. Many men and women worked in manufacturing and needed to commute from home to work.

A regular electric tram service began in January 1904 when, on the first day, 22,800 people were transported around the city by 17 of the 20-strong rolling stock. Most of the trams were double deckers, but a fleet of six single deckers were bought to serve Oldfield Park, so they could pass under the low railway bridge at Westmorland Road.

In its prime the Bath Electric Tramways Company ran 14.78 miles of tram routes in and out of Bath

In its prime the Bath Electric Tramways company ran 14.78 miles of tram routes in and out of Bath. Passengers could travel from as far out of town as Bathford to the east, travelling in to the Guildhall, or as far west from the city centre as The Globe pub at Newton St Loe. The development of hundreds of homes in Oldfield Park worked alongside the building of the tram system, allowing working people a convenient way to get about. The trams must have looked very smart, particularly when newly painted, in the livery of primrose yellow and medium blue, their numbers picked out fairground style in red and gold.

Although a tram could take 33 passengers upstairs on its open-top deck and 22 downstairs, at peak times as many as 120 were crammed on board. Passengers would get on at the back of the tram, with the option of climbing the winding staircase to reach the top deck where they sat – or stood when the seats were wet – outside in all weathers on hard wooden seats, or they sat on seats on the bottom deck under the beady eye of the conductor. Each tram sported bold advertisements for products such as Borthwick’s Baking Powder, the Bath Coal Company, or Bovril. It was said that each tram had its own quirks and traits. No 20 was known as being slow, while No 23 was poor at pulling and was nicknamed Sleepy Lizzie. Tram drivers were known as motormen and they and the conductors were given a strict code of conduct, enforced by tram inspectors. Woe betide the conductor who left torn ticket stubs on the floor of the carriage, or the motorman who turned up in brown boots instead of the regulation black and would be sent home in disgrace.

There were a few accidents over the years, mostly when trams ran out of control, sometimes turning over. In 1918 a tram ran out of control by the Weston Hotel at Newbridge, careered down a slope, hit a wall and overturned, resulting in the death of Councillor Olinthus Newman who was thrown out of the vehicle and killed. But the worst accident happened in a heatwave in July 1933 when a tram slipped on tar as it climbed Wells Road. The brakes got covered in tar and failed and the tram slid backwards before colliding with another vehicle, causing the death of two passengers and injuring 37 more.

THE DEMISE OF THE TRAM

Given that the trams were widely used by the local population, why did the service come to an end in May 1939? Firstly, the company failed to invest in modernising or updating its stock, so passengers in the 1930s were still travelling in the same carriages built in the early 1900s. Secondly there was an increase in the number of buses on routes that the trams did not cover, including the steep hills of Widcombe and Lansdown, as well as bus routes further afield, to Corsham, Chippenham and Bradford on Avon.

But the Bath tram system clearly held a special place in Bathonians’ hearts. For the very last day of service souvenir tickets were issued for the final tram, which set off at midnight on 6 May 1939 with the Mayor of Bath, Captain Adrian Hopkins, at the helm. The tram was laden with passengers wildly waving and cheering and photographs from the occasion show a crowd of several hundred strong, who had turned out in the dark to witness this historic moment. The last tram did not go far, simply round to the Tramshed in Walcot Street.

Each tram had its own quirks. No 20 was known as being slow, while No 23 was poor at pulling and was nicknamed Sleepy Lizzie

Very little remains today to remind us of Bath’s tram era. The overhead wires have been removed, the tramcars themselves were mostly taken up to the Glasshouse sidings opposite St Martin’s Hospital in Odd Down where they were dismantled for scrap and the tracks that zig-zagged the city streets were torn up. But you can still admire the redbrick building in Walcot Street known as the Tramshed and picture the trams parked neatly inside.

To mark the 80th anniversary of the last of the Bath tram network the Museum of Bath at Work in Julian Road is planning a weekend of talks and an exhibition in June. Details are to be confirmed, but this will give us the chance to look at Bath transport in a new light and perhaps seriously consider the re-introduction of trams to our modern-day city.

With thanks to The Bath Tramways by Colin G Magg, published by The Oakwood Press, second edition 1992, and Buses and Trams of Bath by Steve Chislett, published by Millstream Books, 1986. Both are available from the Bath & North East Somerset Council run central library at the Podium.