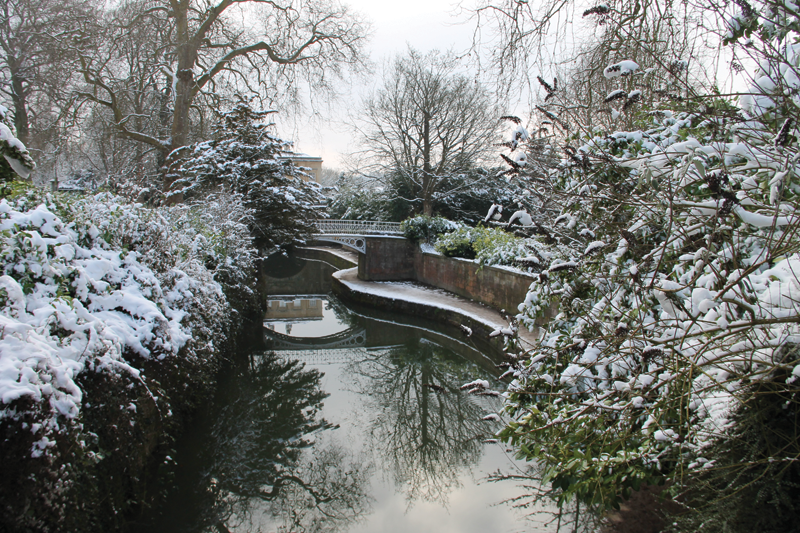 The hidden corners: From Bathwick to Sydney Gardens

Andrew Swift leads us on a stroll around Bathwick, highlighting historic points of interest along the way, before arriving in Sydney Gardens where he invites us to imagine the pleasure gardens in their heyday

Until the late 18th century, Bathwick was a tiny village clustered around a 12th century church, and was accessible from Bath only by ferry. Then Pulteney Bridge was built, and plans were drawn up for development on an unprecedented scale, with one of the most elegant streets in Europe leading to the eclectic delights of Sydney Gardens. The old church was swept away, along with the cottages, as out of keeping with the ultra-modern, ultra-fashionable new town that sprang up around them.

Only part of what was intended was built, but, over two centuries on, still fashionable but no longer new, Bathwick is full of architectural showpieces, as well as some decidedly quirky hidden corners, which this month’s walk goes in search of.

Setting off across Pulteney Bridge, with the classic vista of Great Pulteney Street ahead, turn left down Grove Street. The datestone of 5792 on the left dates from 1788, which was 5792 according to the Masonic calendar, which began in 4004 BC, when the world was believed to have been created.

As the road curves, you pass the old gaol on the right. This was one of the first new buildings erected in Bathwick, and, to blend in with the rest of the intended development, was in palatial style – except for the ground floor, which should have been its basement. Like other Georgian houses, it was built from the basement up, but the street was never built up to what should have been its ground floor.

A little further on, bear right along a broad alley past an old school and turn right along Henrietta Street. Look out for two archways on the left that led to Laura Chapel, where worshippers had to pay for the privilege of attending services. Opened in 1795, it was demolished in 1909. Turn left through the next archway into Henrietta Mews.

The redbrick building you pass on the right was built in 1907 as a garage for the Pulteney Hotel. Turn left into Henrietta Park, where there was to have been a large square – until the money ran out. Bear left, passing an old drinking fountain, and then fork right, where, hidden behind the fence of the George V Memorial Garden, is a stone commemorating the park’s opening in 1897.

Bear left along a path, turn right along Henrietta Road, and, just before the end, turn left into St Mary’s Churchyard, with a ruinous mortuary chapel, built from stones salvaged from the old church, in its midst. Heading clockwise round the cemetery, look out for a Roman coffin built into a wall, and a blocked archway into the garden of the old rectory, which also came from the old church. As you go through the gates at the end, St John’s Church, consecrated in 1862, is ahead. The graveyard in front of it – with a tomb bearing the curious inscription, ‘This Grave is Full’ – is the site of the old church, demolished in 1818. Turn right up to the road. The elaborate archway opposite may once have been the entrance to long-lost pleasure gardens, although it later served as the entrance to a builder’s yard. To its right is Rochfort Place, with superb fanlights and toothing-stones indicating that there were plans to extend it further north.

To the right of Rochfort Place is the oldest surviving house in Bathwick. The spacing of the second-floor windows is due to it having been gabled; a parapet was added in the 18th century to modernise it.

As you turn right along Bathwick Street, you come to Holburne Place, newly-built in mock-Georgian style. In 2012, before work started on it, archaeologists discovered a Roman street and buildings on the site. Cross at the lights, carry straight on along an alleyway and turn right along redbrick Powlett Road. A left turn at the end leads into Forester Road and the site of Bathwick Villa, built in 1777 and once surrounded by the aforementioned pleasure gardens. When it was demolished in 1897, some of its ornaments, such as urns, pediments and a winged dragon, were used to embellish the houses on the left.

Turn right along Forester Lane and left at the end, passing a cottage which, until the canal was re-routed in 1840 to make way for the railway, stood on its banks. After passing the end of Rockcliffe Avenue, the road drops down to Hampton Row, passing the entrance to Cleveland Pools, opened in 1817, closed in 1984 and now the focus of a concerted reopening campaign.

A little further on, at 1 Hampton Row, was the Queen Victoria pub, closed in 1965 and earmarked for demolition, along with the rest of the row, to build a new road. The scheme was dropped and the houses were saved, although those at the end remain derelict. At the end, where the road widens, was Bath’s shortest-lived station, Hampton Row Halt, opened in 1907 and closed in 1917.

Cross the footbridge, go up steps and turn right alongside the canal. After 200m, when the canal widens, were the Darlington Baths. Opened in 1869 for men and boys (unless they were ‘intoxicated or disorderly’), the baths were screened from public view and closed in 1901, although steps down to the water survive. Carry on through the tunnel, taking a look at Old Father Thames above the portal at the far end, and, after going under a bridge, go through a gate into Sydney Gardens. Opened in 1795, these were packed with delights to divert visitors, and, when the canal was built five years later, it was designed to complement their air of whimsical elegance.

Standing here during the gardens’ heyday, you would have seen, to your left, a maze twice the size of that at Hampton Court, with a Merlin swing in the middle, and a ‘romantic subterranean passage’ leading to an elaborate grotto. Over to the right was a sham castle surrounded by a moat, from which a stream ran down to turn the wheel of a miniature mill. Elsewhere there were swings, while down by the hotel – now the Holburne Museum – were dinner boxes, a bandstand, a cascade and an area for firework displays.

None of these delights survives. What was left of them went when the railway was built, but, to round off the walk, one visual spectacle can still be enjoyed.

If you head to the front of the Holburne and look along Great Pulteney Street, you will see, rising above the buildings at the far end, the Silbury-like profile of Twerton Round Hill, which, according to legend, was the burial place of Bladud, founder of Bath. While it is possible that this alignment is fortuitous, it was billed as one of the garden’s attractions, and, given that the whole development was on a greenfield site, there seems no reason to suppose it was not deliberate.

Andrew Swift is the author of On Foot in Bath: Fifteen Walks Around a World Heritage City and co-author, with Kirsten Elliot, of the recently-published Ghost Signs of Bath.