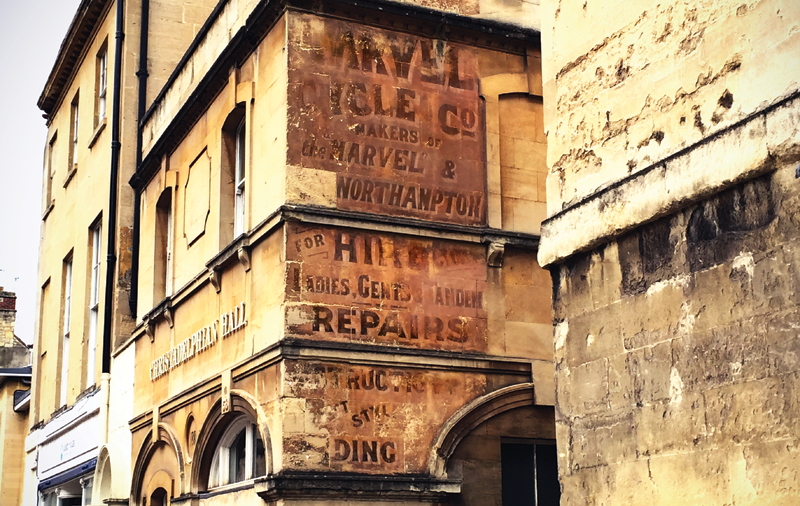 The ghost signs of Bath

If you were to be asked what Bath is famous for, you might reply its hot springs, with the Roman Baths and the spa, or its architecture. To others, it might be the connection with famous authors such as Jane Austen. But for a growing band of dedicated aficionados, there is another attraction. It is home to a veritable treasure trove of ghost signs.

Ghost signs are those fading remains of advertisements which were once painted on many a well-placed wall to promote trade. On some, the words are clear – on others, a muddle of letters can be seen where one version was painted on top of another, only for the earlier one to begin to show through. Ghost sign collectors call these palimpsests. It becomes almost a compulsion, each time you pass one, to have another go at deciphering the mysterious layers.

Ghost signs exert a peculiar fascination. They bring back to life an earlier age, when bread was baked in the local bakery, dairies sold milk and eggs in the heart of town, and butchers advertised such delicacies as ‘Dill’s famous polonies’, as Mr Whatley of Cheap Street did in the late 19th century. What makes Bath so special is that it has some very old ghost signs indeed.

Advertisements on walls are not new. On the contrary, they have a very long history. Some have been found at Pompeii, for example, and at other ancient archaeological sites. But the heyday began in the early 19th century. The first sign-writers were known as chalkers – they chalked advertisements on convenient walls.

Soon, however, signwriting became a skill in itself, although many craftsmen combined it with other trades such as plumbers, glaziers, decorators. Even gasfitters and general engineers, like the Bowler family of Bath, took on signwriting as a sideline. Others, however, specialised in signs, and showed off their skills on the façades of their premises.

Such a demonstration of the signwriter’s art can be seen at 27A & B, Belvedere, Lansdown Road, where R Boseley demonstrated his talents in a plethora of what today we call fonts. This would be frowned on by modern designers but acted as a trade sample for potential clients.

The earliest ghost signs tend to be local, carried out by local craftsmen for small businesses. They can be seen right across the Bath area, from Batheaston and Bathford in the east, to Twerton in the west. As you head for Bristol, you may notice the remains of Avon Buildings. Now looking very dilapidated – there have been applications to be demolish them– they still proudly advertise the wares of E Dillon and Son, purveyors of prime English Meat. Dillon took over the shop about 1905 and the firm was there until the early 1960s.

Eventually, big business saw the advantages of large painted signs. However, companies such as Players or Nestlés demanded a consistency of design, achieved through the use of painters’ guides. These were issued centrally, by the marketing department or advertising agency, and then scaled to the appropriate size before preparing paper or fabric to set the design onto the wall. Possibly such companies hired a travelling team to produce signs, giving consistency, but it lessened the artistic input from the signwriter.

On the corner of Hot Bath Street, a Nestlé’s corporate poster has been painted over an earlier, but still visible, sign. This advertised the grocery run by the Misses Large, and advertised Milkmaid Milk. This was produced by the Anglo-Swiss Condensed Milk Company, established in the UK at Chippenham in 1873. In 1905 it merged with its rival, Nestlé’s, to form the Nestlé & Anglo-Swiss Condensed Milk Company. The new company adopted a trademark of a white oval, containing a red flag with a white cross, on which appeared the word SWISS – all of which can be made out in this surviving version.

Ghost signs don’t just appear on walls – they can also be seen on chimney stacks and bressumers. Many appear above shops, like that on McColls’ shop in Argyle Street, where the words Nuremburg House can be seen, as well as some other, fainter letters.

Around 1858 and 1864 this building was known as the German House, the brainchild of Simeon C Silverstone, who was of Prussian origin. Everything German was fashionable at the time, largely thanks to Prince Albert, who died in 1861. Silverstone capitalised on this by offering a range of goods imported from Germany. The craze only lasted a few years, and on 27 February 1866, Silverstone’s household furniture and remaining stock in trade was sold at auction. But why, when Silverstone always described his business as the German House, does the sign say Nuremburg House? We do not know.

Other signs are equally perplexing. On the Bladud’s Head pub at Larkhall, a mysterious chequerboard design has been revealed, along with a curious symbol. Is this, perhaps, to do with Freemasonry? Younger ghost-sign hunters may be puzzled by the Scottie dog visible in Monmouth Place, but older readers will doubtless recall the series of Spratt’s adverts in which the word Spratt’s was converted into silhouettes of various animals.

Some tell a sad story like that on Gay’s Hill. The Asylum for the Maintenance and Instruction of Young Females in Household Work was founded in 1819. It was ‘intended for the reception of such destitute female children who are of an age to leave school but not yet old enough for household service.’ Since children went into service at the age of 12, this is a chilling indictment of the times.

Although attracting titled patrons, and being the subject of charity balls and concerts, by 1827 it was in trouble financially. There had been typhus, and paid nurses had been required. After just 12 years, in 1832, there was a desperate appeal for funds. By then, 61 girls had been placed in service, eight discharged for ill-health, three expelled, five had died, and 17 were left in the asylum. £377 was raised, but the asylum seems to have closed shortly afterwards. The children are long gone – but the sign reminds us of the not so good old days. In Rivers Street there is a relic of an old established Bath business which some readers may still recall – the Old Red House Bakery. The main shop was in New Bond Street, and the business was owned by one of Bath’s most high profile families, the Taylors. The façade of the new Bond Street building has long been restored to its natural stone but the familiar deep red it was once painted survives here.

Unlike the Old Red House, many companies came and went in just a few years. The Marvel Cycle Company, with a spectacular sign in New King Street, was only there for about four years. Another short-lived business was that of Mr Strawbridge of Milsom Street, who had a brush manufactory at No 35. Mr Strawbridge was only there for six years before leaving for Australia, but his sign remains.

Which is Bath’s oldest sign? For a long time it was believed to be the famous Circulating Library sign, also in Milsom Street. This dates from 1823, when Francis Joseph, who had taken over the shop the year before, opened a state lottery office there.

By 1826, he had gone, yet another fleeting business which has left a permanent memorial. The signwriter may have been R Boseley, who was active at this time. However, there is an earlier sign in Burton Street, which dates from 1819. But both are eclipsed by some writing which appeared in 2012, when work was carried out on the Porter pub in George Street. The items advertised include: Stomach Pills, Cakes, Plaister, Snuff and Tobacco, Ointment, Essence, Magnesia, Perfume and Elixir.

The lettering has two notable features. Firstly there is the use of the long S – the S that looks a bit like an f – and the fact that all the nouns have capital letters. Both these usages had virtually died out by 1800. The sort of people who sold this curious assortment of goods were hairdressers and perfumers. There are two likely candidates – Richard Warren, established in or near Miles’ Court in 1778, and William Woollard, established in Miles’ Court in 1780. Since he sold snuff and medicines, he seems to be the most likely candidate. This is extremely early for a ghost sign. It may even be the earliest surviving sign in the country. It marks the transition between chalking and true sign-writing.

This is just a glimpse of the wealth of ghost signs across the area. To find out more, pick up a copy of Kirsten Elliott and Andrew Swift’s book Ghost Signs of Bath from local bookshops, such as Topping & Company Booksellers and Mr B’s Emporium Of Reading Delights.

Main image: an early 20th century example of over-writing on New King Street which includes an advertisement for Devonshire Dairy and another for Bovril