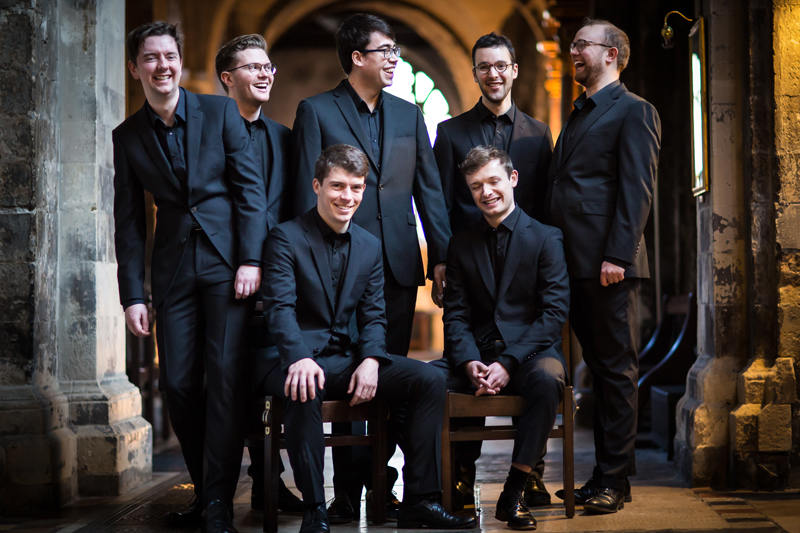 The Gesualdo Six: singing in the Baths

Choral group The Gesualdo Six are singing at the Roman Baths on 18 May, the first time they have visited Bath, performing a programme of cappella music around the theme of water. Emma Clegg chats to director, conductor and founding member Owain Park about the group and its plans for the concert

Singing together in a choir or listening to a choir as part of an audience seem oddly tucked-away memories, but all that’s about to change as the Gesualso Six choral group drop in at the Roman Baths during Bath Festival’s celebration of books and music in May. The event will be socially distanced, but the singers’ position underneath the archways on one side of the Roman Baths will mean that their vocals are likely to drift atmospherically into other parts of the city.

Appropriately the programme will have a water theme. “With choral music there is a lot of water imagery, with streams flowing and that kind of thing. So a lot of composers have reflected on that and there is a large pool of work to choose from. And with more contemporary pieces nature really finds its way in, so I’ve chosen music that makes sense of where we are performing as well as being a nice open-air concert, which is novel,” says director Owain Park.

Pieces include choral masterpieces by Palestrina, Monteverdi and Gesualdo; English renaissance music by Byrd, Campion and Tomkins; as well as contemporary works and arrangements by David Bednall, Cristen Holmes, Vaughan-Williams and Owain Park himself. The evening will fade away with Wilbye’s Draw on Sweet Night.

There will be two performances, one at 7.30pm and one at 9.30pm and the seond performance in the dusk will see the audience holding torches. Just the idea of this seems to heal some of the sadness and isolation that we’ve all experienced in the last year. While the event will be socially distanced, the emotional uplifts and the ability for the spirits to soar as you listen to a professional vocal performance will be ours again for a while, in person.

“It will be so atmospheric. The tickets went on sale and were all snapped up,” says Owain, “So it’s nice to have that feeling of people wanting to come and hear us again.”

I ask what the group got up to during lockdown. “We just completely changed our output, so focused online, created concert series, lots of videos and have turned it round so our audience can connect with us online. And we’ve tried to come up with inventive ways of keeping people engaged.”

Talking about working in isolation, Owain explains, “It is difficult to make music in your front room with nobody else. So much of music is collaborative, and bouncing off each other.

“We have been able to work together in the same room since last June and that has transformed how we can work. But even when we are doing things at home, we’ve talked about the interpretation beforehand and knowing what we want to do with the music means people can inflect it differently, even though it’s being sung in isolation.”

The Gesualdo Six were formed in 2014, with Owain a founding member. “We met at the University of Cambridge and this obviously has a very longstanding choral tradition. But we came from all different parts of the country, from Bristol and Salisbury and Manchester, and came together to perform some music by the Italian composer Carlo Gesualdo, which is where we got our name.

“We were very small and everyone sang their own parts, like a string quartet, each member could shape and sculpt their part in their own way. We didn’t know what would happen with the group when we started. Because we enjoyed performing together it’s kept going, and we’ve been able to built a bit of momentum which has been really exciting.”

When the venue has got something special, you want to show that music can sometimes reflect and enhance that

The group consists of six choralists, plus Owain, who also sings. There are two countertenors, two tenors, a baritone and a bass. The countertenor voices give a soaring choirboy quality to the music – they use a falsetto pitch, but are worked on to be stable and controlled. “It’s a perfectly natural voice,” explains Owain. “It’s just when people with changed voices – mostly men whose voices have broken – flip into their falsetto. It’s using your vocal framework in a slightly different way. But it’s not like they did in the 18th century with castrati.

“People seem to have this misconception that a countertenor is an outdated way of singing, but it’s not at all, it’s just a different way of using the voice. In fact it’s a little more authentic for some of the older music because that is how they would have heard it performed 300–400 years ago. So it’s nice to have that as a continuing tradition.”

“The countertenors tend to reside in that high area for singing. Sometimes in the past when they had those lower lines in a composer like Purcell, for example, they would often switch into a lower register because that was fashionable at the time.”

Although there are six regular members, there are others who take part when required. “I do sing things with the group,” says Owain, “Sometimes we change up the way that we perform. So some pieces are three voices, some are three, five or six. And rather than have everyone on stage all the time, we think about what the repertoire needs. The useful thing is that if somebody falls ill or isn’t available you can still be flexible with the repertoire. We were founded with me as the conductor, but since then it’s become a bit more loose.”

The performance in Bath will be a capella, but The Gesualdo Six often experiment with different styles: “We have occasionally performed with string instruments, a bit with organ and have also worked with sopranos and mezzo sopranos. We are open to collaborations and in one of the festivals we organised last year, the London Sound Gallery, we collaborated with five other artists. So while the group line-up is set, it also allows us to try new things out. That’s been a positive thing about the way the industry has had to change – people have been more open to working with one another.”

The group have performed in some inspirational venues, including a wildlife park in Jersey. “We’ve performed in a fair few events outside and it’s often a different style of music. Sacred, slow polyphony really does need those arches and those indoor spaces to help the sound. Whereas there’s music that really works well outside – we’ve done concerts with light shows where images are projected on to the ceiling. And we performed with the Museum of the Moon in Harrogate, where there was a big hanging moon in the middle of the building. When the venue has got something special I think people can tell and you want to show that music can sometimes reflect and enhance that. That’s where programming comes into the equation.”

Owain makes it clear that there is much more to a concert than what the audience sees and hears: “The concert is the culmination of months of thinking about the repertoire: where we are going to rehearse, what it means, and taking into account the venue or the theme of the festival. What we do on the day of the festival is make sure everyone is vocally in good shape.

“My role as director and conductor is more of a management role than an artistic one, especially with a smaller group because you are so reliant on everyone to contribute, so everyone has a greater role overall because there are fewer of us. The challenge of the concert itself is interacting with the audience, letting them know about the music, and trying to give the concert a good shape so that visitors have a nice experience, rather than just being sung at for an hour.”

“Because we’re in the Roman Baths and it’s being recorded, I won’t introduce each piece, but will let the concert flow more. Especially during the second performance when it’s dark. If it’s interrupted by a lot of chatting it can become a bit choppy. So I’ll do a brief introduction and then just let it happen.”

The group are often involved in educational work. “Many of us benefitted from being choristers at churches and cathedrals, but not everyone can do that. Singing in schools is so important and it’s being tested at the moment because there’s a lack of commitment to funding that area of the curriculum,” says Owain.

“We are looking at setting up a charitable foundation so that we can fund that educational work. It doesn’t all come down to money – we want to make it work whatever happens, but it’s tricky. So the main thing is finding that framework for supporting the work. What has been good is that the schools with resources – often private schools – can bus in children from state schools in the area and we’ve been able to work with them. We had one event with 150 kids and that was really fun, where the different schools developed friendly rivalries. That sort of atmosphere was really conducive to everyone singing with gusto.

“If we can get them all in the same building, in those situations it’s just about having as much energy as possible. And you can’t do it forever – about 45 minutes to an hour is about as much as everyone can take. What we’d love is not just to work with a group in a school once – if you could do it three times a year then people could progress. That’s where the commitment to funding comes from.”

As a boy Owain was a chorister at St Mary Redcliffe Church, Bristol. “I still feel very connected to the west country,” he explains.

“I was at school in Wells and I did a few concerts and courses at Bath Abbey. So that’s where I’m more used to performing. And because this is such a special occasion it’s cool to be in the Baths in the shadow of the Abbey doing something a little bit different.”

The Gesualdo Six, 18 May, Roman Baths, 7.30pm and 9.30pm. The event will also be filmed and broadcast from Friday 28 May as part of The Bath Festival at Home; bathfestivals.org.uk