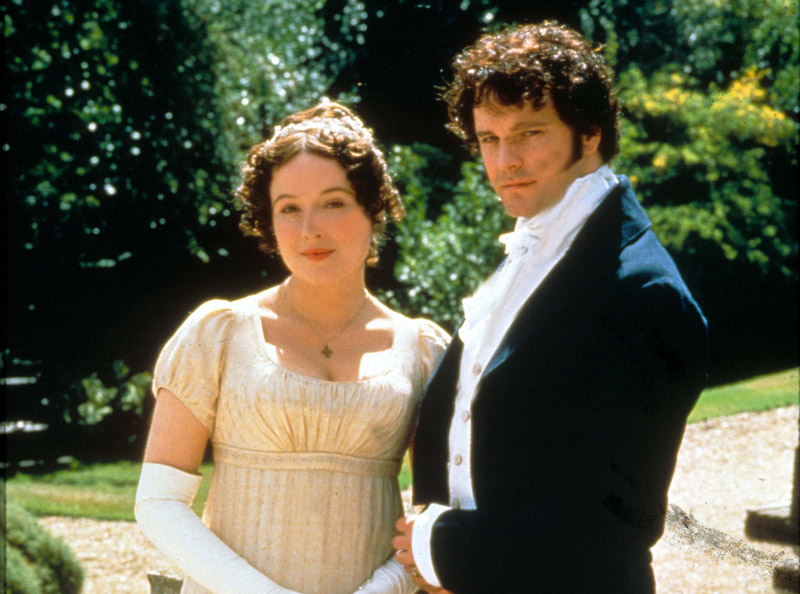 We all know the scene: Colin Firth jumps into a rather murky pond on the Lyme Park estate in the Peak District, breeches and all, before strolling back to his stately home in his wet shirt and consequently walking into the hearts of the nation’s period drama lovers, becoming a household name overnight. It’s a scene that has carved a firm niche in television history and has become a cultural reference point.

“She is tolerable, but not handsome enough to tempt me”

Before this, Mr Darcy was more often than not considered a background character in Pride and Prejudice. Jane Austen’s contemporaries, in particular, paid more interest to the likes of the nonsensical Mr Collins, preferring the satirical comedic character of the silly clergyman over Elizabeth’s quiet love interest.

While Firth perfects the Mr Darcy saunter as he wanders back after his dip in the pond, little did viewers know that the antics on the set of the 1995 BBC production of Austen’s Pride and Prejudice could have meant that this illustrious scene may never have actually made it into the final cut…

While we think we see Firth diving into the pond, it is, in fact, a stunt double, and the shots of Firth swimming underwater were instead taken in a tank at Pinewood Studios. “On the day of filming this scene, which was very early in the filming schedule, someone had left half of the pool cover on, so when Firth came up to the surface, he smashed the front of his face on the cover. There was blood everywhere,” local writer Gabrielle Malcolm tells me.

“The first thing that Simon (Langton, the director) was worried about was whether the insurance would cover this and if it would delay the schedule because he didn’t know at the time that Firth was going to become so huge. He said that if he had recast Darcy at the start of the shoot, no one might have noticed and we might not be in the same situation as we are today…”

So the Darcy-mania we still see almost 25 years following the series release may never have happened. Luckily, Firth was patched up and filming continued, and the allure of Mr Darcy has continued ever since.

“They walked on, without knowing in what direction.”

Despite the novel having been published more than 200 years ago, it’s difficult to pinpoint another 19th-century fictional character that has harnessed such a loyal following. You just have to head into the gift shop at the Jane Austen Centre in Bath to see the shelves full of Darcy-related products. From bookmarks to posters, coasters to socks, it’s all there. And it’s the mass merchandising of this particular character that first inspired Malcolm to begin researching the global fascination with Mr Darcy.

“Seeing people around Bath with the I ♥ Darcy bags, I wondered what other 19th-century characters would have that? You wouldn’t have a T-shirt that says ‘I love Scrooge’ unless you were particularly crazy about Dickens. The I ♥ Darcy items struck a chord with me because why would you take the step of making this merchandise about this figure?” she asks. It was this that pushed Malcolm to explore Darcy’s legacy further and write her latest book, There’s Something About Darcy, which investigates Darcy’s impact on popular culture over the past two centuries.

The answer as to why the love for Darcy has continued is multifaceted. “Austen’s work, particularly with Pride and Prejudice, creates an intersection of very dramatic, romantic and funny satirical tales together. Darcy is both mocked and praised in the book. He is a snob and a prig but also goes through that transition.

“The reason why we come to like him is because of Austen herself, as she mediates all the characters through her prose style. She was really funny, sharp, and using the kind of origins of folk-tale, fairy tale, and the social elevation of a young woman. Yes, it is rags to riches, it is Cinderella, but there’s more to it because of what Austen does.”

“My good opinion once lost, is lost forever.”

As well as Austen’s style of satirical writing, the interest in Darcy’s character is influenced by the accessibility of the story itself. “It crosses boundaries and cultures. Yes it’s a bubble of English middle-class-ness but that’s not the point – it’s a limited scope to deliberately dissect human nature and relationships closely. With Austen [her characters are] her next-door neighbours and the people she saw opposite her in the Assembly Rooms,” says Malcolm.

And for a character that doesn’t actually appear very often in the novel, why are we drawn to Mr Darcy? “He just wants to help Elizabeth’s family because of what they have at stake,” says Malcolm. [Spoiler for those unfamiliar with the story: Elizabeth’s 15-year-old sister Lydia runs away with the notorious baddie George Wickham without any certainty that they will get married. Potential family ruin is on the cards. Darcy quietly saves the day behind closed doors. Happy endings for all.]

“Austen explored the idea of the women and the dislocation, inability and disenfranchisement of being a woman [in her novels], but also looked at what it was like for men in contrast; to be a gentleman there was a call on their resourcefulness and their sense of responsibility – and that’s the test that Darcy passes because he does it [saving the day] all in a completely disinterested way. He only acts because of Elizabeth and her family. He says ‘I only thought of you’.”

…when Firth came up to the surface, he smashed the front of his face on the cover. There was blood everywhere…

For Malcolm, who lives in Bradford on Avon, her personal interest in Mr Darcy first began when she picked up a copy of Pride and Prejudice for the first time aged 11. “There was a language in my family where they had read Austen’s books and so there were these frames of reference that would be made and I didn’t want to miss out,” she says. Then came the 1980 BBC adaption starring Elizabeth Garvie and David Rintoul, where Malcolm found her original Mr Darcy.

“Rintoul was just gorgeous. And then I got to meet him years later at a Shakespeare conference. We all had to pitch in and read a few lines and when I got to my bit, I totally fluffed it. I was sat opposite Mr Darcy,
I was so tongue-tied and blushing. I was old enough to know better. But he was exactly the same, he had so much poise.”

The variety of adaptions of Pride and Prejudice is almost endless: there have been multi-million pound film adaptions (think Bollywood, vampires, Bridget Jones’s Diary), modern day takes such as Pride and Prejudice: Atlanta with an all African-American cast on US channel Lifetime, murder mysteries, and plenty of fan fiction – all of which Malcolm completely engrossed herself in during her research for her new book.

But can a story that’s been retold so many times continue to attract such a large audience? “I’m optimistic about future adaptations. People who haven’t even read Austen are familiar with her world. I think there are still ample opportunities available for people to engage with it. There’s a brilliant range of characters such as the Hursts, Miss Bingley, the militia, all that side that you could explore,” she says.

“My affections and wishes are unchanged; but one word from you will silence me on this subject for ever.”

Malcolm, who received her PhD from the University of Kent in 19th-century literature and worked as an academic for 15 years, now writes full-time and teaches a creative writing class at Bath College. When she’s not writing, you can find her chairing talks at the Jane Austen Festival and other literary events around the world.

One of her festival highlights was hosting a talk with the 1995 adaption director Simon Langton at the Masonic Hall in Bath. “It was a huge sellout. I said to the audience that if there’s one person for all of us to be here for apart from Jane Austen, it’s Simon Langton. And then they all gave him a standing ovation. I said to Simon ‘they love you, for what you did, you made that series’,” says Malcolm. “He’s truly a brilliantly gifted TV creator. He works with his instincts but simply says that the source material was so good. But he’s created something that is so universally loved. It’s such a gift that he has given.”

It’s certainly true that Langton and the rest of the cast and crew created an adaptation that has influenced the popular culture surrounding Austen’s work indefinitely. And it is this that has encouraged Malcolm to spread the word of Austen further afield with her work.

“My goal is to give people these interesting and informed reads, but for the popular readers. My intention is to try and bridge that gap, and this book is my first real push to do that.”

With more adaptions of Austen’s work on the cards, sell-out events and festivals, as well as enthusiasts like Malcolm promoting her work, it looks like Austen’s characters will be sticking around for a while longer. “The fact is that her work is only getting more and more popular,” says Malcolm. “Where you see other people from the 19th century and the interest gets to a kind of plateau, Austen is getting more popular – more younger readers are picking up her novels.” And may the Austen, and the Darcy, legacy live on, we say!

There’s Something About Darcy by Gabrielle Malcolm is out on 11 November, published by Endeavour Quill, rrp £9.99

Our favourite spin-offs of Pride and Prejudice

Death Comes to Pemberley by P.D.James
This murder mystery sequel from award-winning crime writer P.D. James follows Fitzwilliam Darcy and Elizabeth Bennet in the immediate years after their wedding day. All seems to be rather pleasant at home until Lydia arrives screaming that her husband has been murdered. This bestseller was then made into a BBC series in 2013 starring Anna Maxwell Martin, Jenna Coleman, Matthew Goode and Eleanor Tomlinson.

Pride and Prejudice and Zombies by Seth Grahame-Smith
“It is a truth universally acknowledged that a zombie in possession of brains must be in want of more brains.” Elizabeth is determined to wipe out the zombies in Meryton, but the arrogant
Mr Darcy arrives on the scene. Expect romance, swordfights and rotting corpses. This parody novel became the inspiration behind the 2016 film adaption starring Lily James, Matt Smith and Charles Dance.

Bridget Jones’s Diary By Helen Fielding
First published in 1996, Helen Fielding has stated that Austen’s most famous work was a big influence in the creation of this much-loved tale. This multi-million-selling novel follows a 30-something single woman living in London through the ups and downs in her career and relationships. The first film in the Bridget Jones franchise came out in 2001, with Renée Zellweger as Bridget, Colin Firth as Mark Darcy and Hugh Grant as love rival Daniel Cleaver.

Longbourn by Jo Baker
This is a reimagining of what life is like below the stairs at the Bennet’s family home. Domestic life, ruled with a tender heart and an iron will by housekeeper Mrs Hill, is about to be disturbed by the arrival of a new footman, bearing secrets and the scent of the sea. A film adaptation directed by Sharon Maguire (Bridget Jones’s Diary) and produced by Random House Films and StudioCanal is on the cards apparently, so there’s enough time to tuck into the book first…