The Canal: Life on the water

The canal boat community is as diverse as its land-based neighbours. Georgette McCready went to meet boaters who live on board to find out if life afloat is as romantic as we might imagine. Photography by Shona Cutt

On a sunny day life on a canal boat looks very appealing. Picture your floating home moored in some quiet rural spot, while you enjoy a cup of tea and watch a heron fish from the bank, safe in the knowledge that your bed, kitchen and bathroom are all under one neat roof – and that tomorrow you can be enjoying a fresh view from your armchair.

But is the reality of being a boater quite so glamorous and carefree? We visited the Kennet and Avon Canal to talk to people who live permanently aboard their boats.

Peter and Elaine Cuff began their canal adventure when they hired a boat for a fortnight just before they retired to see how they’d enjoy life on the water. They loved it and very quickly decided to buy a craft of their own, falling for the charms of the 50 foot long traditional canal boat, Mettela.

They left their home near Winchester for a trial period nine years ago and have been moving ever since. During that time, says 77-year-old Peter, they have explored most of the canals in Britain, but he is quick to point out the one flight of locks they’ve avoided: “We haven’t done the Rochdale locks, but that’s because there are 80 of them.” The view from the couple’s cosy sitting room changes every few days as they keep moving on. As Peter set out from his doorstep, or rather gangplank, to take Pies the dog for a walk along the towpath I asked him about the downside of living on a boat.

“There aren’t any,” he insists. “We’ve got solar panels for electricity, we’ve got the coal-burning stove, a cooker and three radiators, hot showers and a fridge, although we only really need to put that on when it’s very warm outside.” 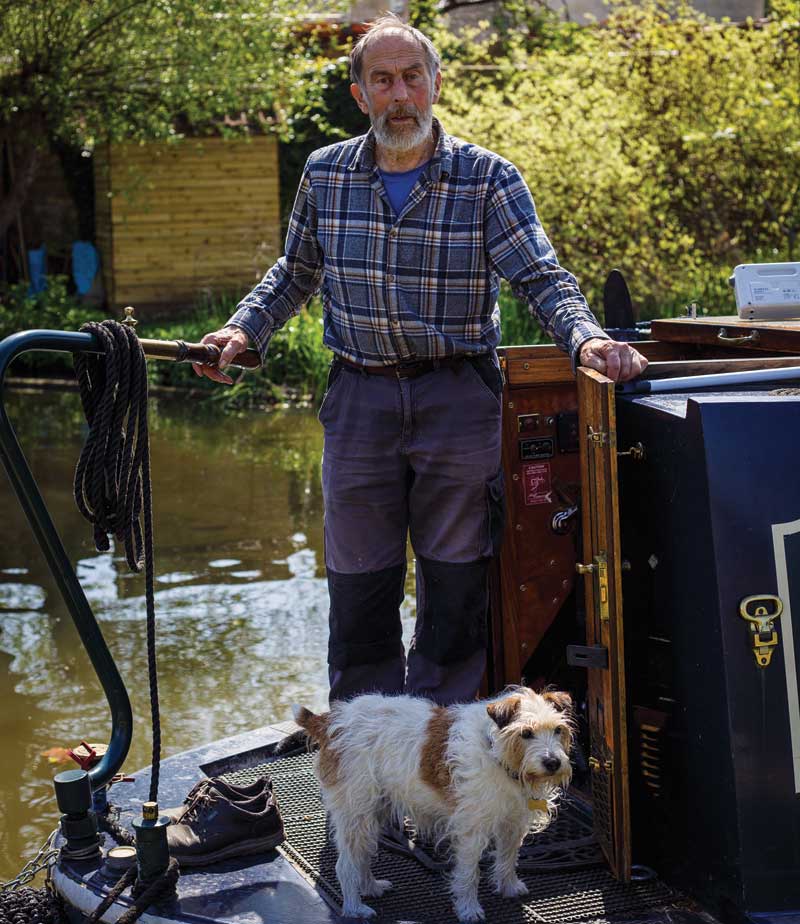 Peter Cuff and dog Pies aboard their boat Mettela

On long dark evenings how do they entertain themselves? “We’ve got a TV but we don’t watch it much. We’ve got the radio and listen to Radio 4, then we’ve got our hobbies. I make matchstick models, dolls’ house furniture and enjoy drawing, while Elaine enjoys tapestry. We also like that there’s not as much housework on a boat as there is in a house.”

The Cuffs are registered with a GP in Winchester and have recently bought a car to enable Peter to attend appointments, but he says up until now if they’ve needed a doctor during winter months they have registered as temporary patients.

He tells me washing clothes is simple “you just dunk them in the canal” before admitting he’s teasing me. Elaine says she takes their laundry to the nearest launderette, which she searches for using the internet on her tablet. She says over the years they have tackled ­­some of the challenges of boat life, for instance having any necessary mail sent to her sister, which she’ll open on their behalf and a mobile phone keeps them in touch with family and friends. When Elaine broke her leg on board a couple of years ago, a nearby boater took her to hospital and the Canal and River Trust granted special dispensation for them to stay in one area during the time she was having hospital treatment. Generally the Cuffs stay moored in one spot any time between 48 hours and 14 days, the longest permitted stopping time, before going on to explore the next section of waterway.

“You meet some interesting people,” says Peter, “but if you decide you don’t like your neighbours you can always move on.”

Colin and Sally Ogg have been living aboard their boat for ten years. Colin designs t-shirts which the couple sell online and at floating markets, under the brand name Ogg1.com. Sally also works as a postwoman in Trowbridge. She says: “You’ll find a lot of posties live on canal boats. Colin and I love this life. The furthest north we’ve been was Castleford, the furthest east was Boston in Lincolnshire, furthest west was Llangollen and the most southerly is Bath.”

Sally says it’s a very physical life, carrying shopping, water and coal on to the boat and the long, cold winters can be tiring, but she says that’s more than made up for by its pleasurable aspects. The couple has a well-stocked garden on the 60-foot boat’s roof and grow herbs, salad leaves and carrots.

“You can’t beat waking up in the middle of nowhere, seeing a kingfisher dart by, or watching a barn owl fly past my kitchen window while I’m cooking – that’s pretty magical,” she says.

The couple say that the boating community is generally very friendly and helpful, lending a hand when it’s needed. “Of course there are people with mental health issues as well as people with drug and alcohol misuse issues, but that’s the same if you’re living in a flat on dry land. Generally speaking we find that the canals are the corridors of politeness as you glide slowly through cities. It’s a great way to see the country. Milton Keynes, for example is lovely by canal,” Sally adds. “I think the general advice to people is to go slow, go easy. Be a considerate boater.” 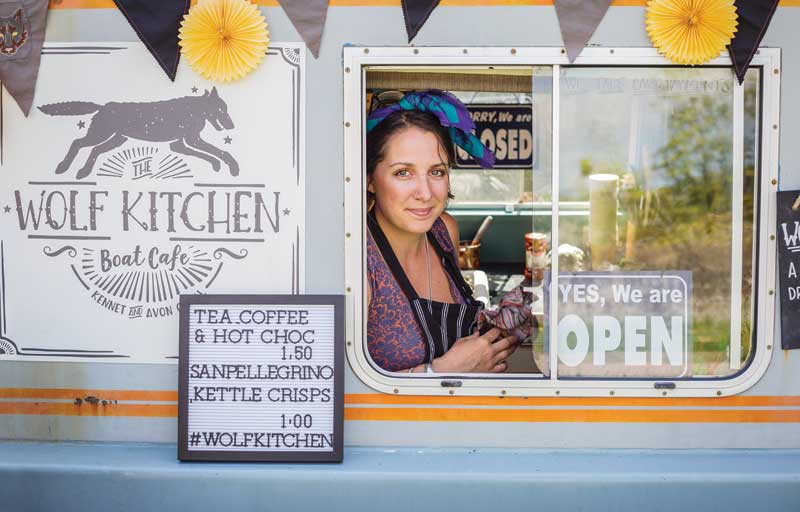 Laura Darling in her floating café

You’ll generally find Laura Darling serving tea and cake to hungry customers from the hatch of her floating café, The Wolf Kitchen. It offers a largely vegan menu and announces its opening times and constantly moving location via Facebook. Laura also works as a graphic designer and her partner Owen installs woodburning stoves in people’s homes. The couple have a son, who is two-and-a-half. At the moment, says Laura, the family enjoys the peripatetic lifestyle, but once their little boy starts school she would ideally like to be within radius of a regular school for him to attend.

How does Laura enjoy canal boat life? “I’ve been living on a boat for over four years and it’s absolutely what I signed up for. I love the change of the seasons and the chance to meet all kinds of interesting people. There’s a great sense of community. And we’ve got a lot of creature comforts on this boat, like a fridge freezer and central heating. We even have a washing machine, although that uses up a lot of our precious water.”

With the sun shining Laura makes boat life look an enviable choice, but she says the winters can take their toll on her mood. “The winters can be hard. It’s not the cold so much as the mud. After five or six months of mud, you can get a bit sick of it. And because I work from home it can be quite isolated.” 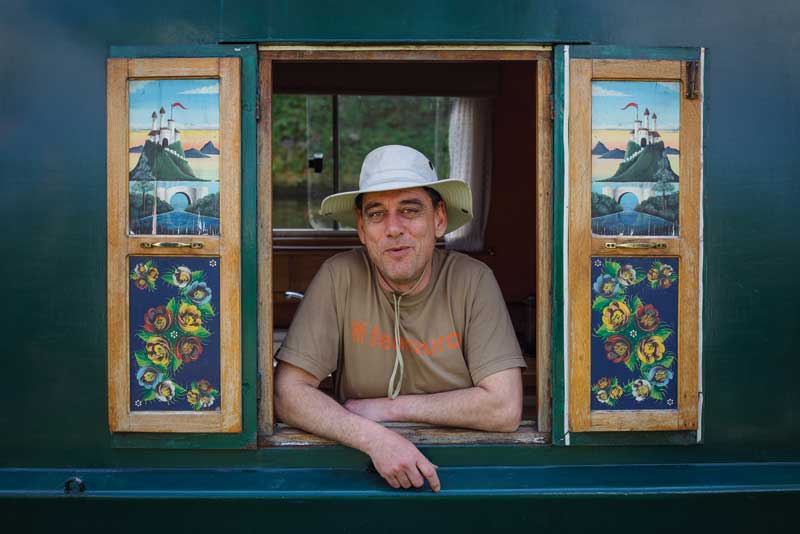 Steve Saunders on his sweet barge

Steve Saunders runs a floating mobile shop, The Sweet Barge. This is his third year of running the business, but he’s lived on a houseboat for the past 12 years.

“Unfortunately I couldn’t get a mooring this year, which means I’m in a different town every two weeks. I enjoy doing floating markets,” he says. “I think the biggest thing to get across is that this is a brilliant community to be part of.” Like Laura at The Wolf Kitchen, Steve uses Facebook to publicise his whereabouts.

The nation’s 2,000 miles of canals and rivers are policed by the Canal and River Trust. Every boat on the waterways requires a leisure licence, whether it’s a live-on boat or not. These have to be renewed every 12 months and require boat owners to provide evidence of valid insurance and a Boat Safety certificate, which is a like an MOT for cars.

Demand for home, or long-term, moorings is very high and in some areas over-subscribed. If you are unable to get a home mooring your option is to keep continuously cruising, which means moving your boat at least every 14 days and covering a range of at least 20 miles in a year, which can be a challenge for boaters holding down permanent employment in one place.

Find out more about what being a boat dweller entails at: canalrivertrust.org.uk

Featured image: Colin and Sally Ogg on their boat with their well-stocked roof garden