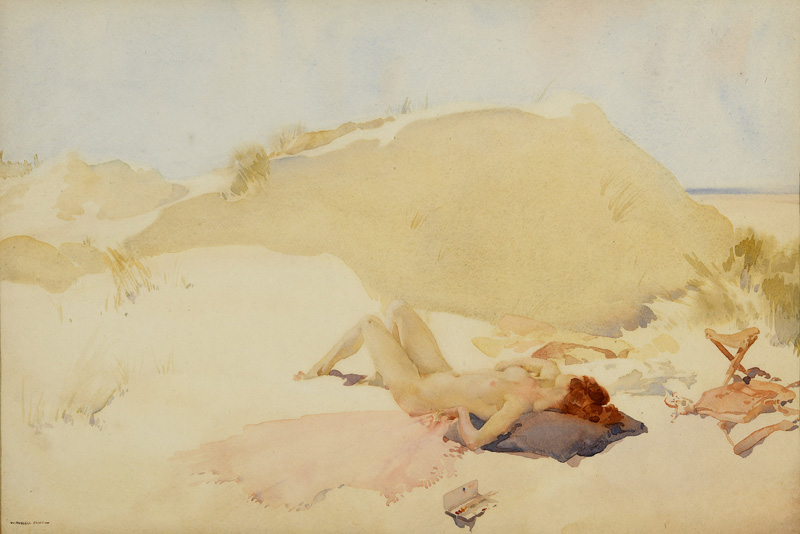 For every prurient art enthusiast who derives some vicarious thrill from ‘studying’ art which displays the great glories of the nude form, mercifully many more see only the skill of the artist and his (or her) versatility at capturing the aesthetic merits of the subject. For Sir William Russell Flint (1880-1969), an educated Scotsman with a remarkable talent, the taunts must have become insistent. How very testing, some might have said, that this refined and affable man who spent much of his career in a studio or a secluded but idyllic corner of France or Italy, should have had to pass his days solely in the company of stunningly beautiful nubile ladies who had disrobed obligingly for Sir William alone.

That Flint excelled at his art should not be doubted.  Having worked initially as a medical illustrator, thereby perfecting his understanding of the human form, Flint managed to focus his career upon subjects of the sort you see here.  He was President of The Royal Watercolour Society for twenty years (1936-1956) and he refined his draughtsmanship and washes to such a degree that his pictures manage to look strikingly realistic and other-worldly at one and the same time. Despite his professional accolades, for he was a member of the Royal Academy too, his artistic peers scrupled to show him the respect that he might have thought he deserved. They criticised the lack of intellectual content in his pictures, the repetitive tropes he loved to adopt and the simple ease of his subjects that seemed to demand little more from the spectator than a sigh of ready admiration. Does one detect a taint of sour grapes in this criticism? For Flint achieved what so few artists can: he was a popular and acclaimed public personality, wealthy and successful, with a strong marriage and a demeanour of stolid respectability throughout his long life. His watercolours were famously reproduced as the ubiquitous ‘artist’s proofs’ (in fact, merely pencil-signed colour reproductions of his best-known subjects, issued in print runs of about 850) and these were to become highly collectable amongst his adoring middle-class clientele who amassed them almost as philatelists would do had the prints been stamps. These prints reached a peak of commercial popularity in about 1988-1993 when some of them made as much as £5000 at auction (those very subjects now make just £100-200).

In a watercolour such as ‘Idleness’ from 1923 (£6000-9000), a nude lies amid sand dunes on a summer day. It may take us a moment to notice the artist’s palette at her side or the folding stool to the right: are these her own effects, abandoned briefly so that she can enjoy the noonday heat; or are they the artist’s wares, their presence hinting at a covert rendezvous?  In ‘Without Impediment’ (£7000-10,000), the title may refer to the lack of ‘impediment’ that a bathing costume would otherwise entail or perhaps the title suggests a more recklessly hedonistic abandonment on those wide, wet sands? The title invites a discreet double entendre (if that is not tautologous) but consider, too, how the inevitable intimacy implied by the model’s nudity is tempered by the openness of that wide beach: the sense of privacy, perhaps even a hint of playfulness, is restrained by the awareness that this is an open public beach where a moment’s sauciness could be interrupted by a currently unseen intruder.

An assessment of Flint’s renown will always be influenced by whether or not one looks for skill or salaciousness in a picture of a nude. There is a feature in ‘Without Impediment’ that marks it as a little unusual in Flint’s oeuvre: the nude turns to looks at us, she catches our eye and she engages us for a second or two. In most of Flint’s subjects, his figures look either at something else entirely or gaze wistfully at nothing much at all. We may look at ‘Idleness’ without awkwardness but we feel a slight embarrassment if we allow our look to linger a little too long upon the other subject. In that subtle way, so deftly deployed by Flint, our own interaction with the picture is not wholly ‘without impediment’ either.

Lawrences will be auctioning six watercolours by Russell Flint from a private collection on 23 April.