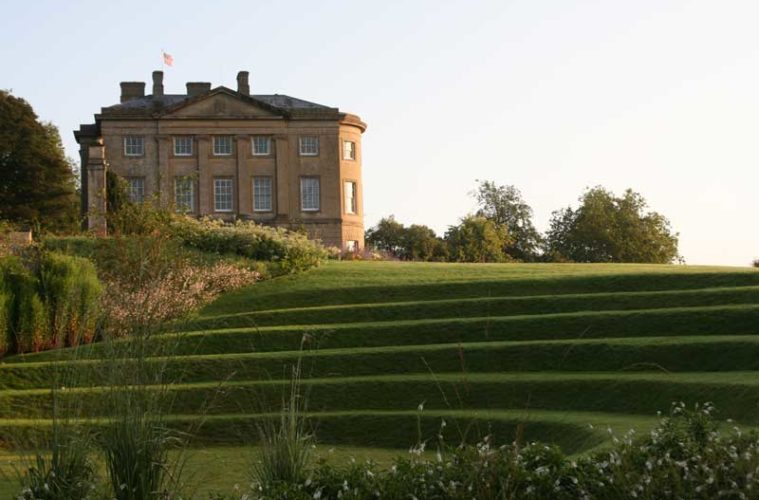 A year on from its installation, head gardener at The American Museum & Gardens Andrew Cannell tells us about the bold new garden designed by trail-blazing landscape architects Oehme, Van Sweden that’s not afraid to break the mould.

Perched on an east-facing limestone bluff a few minutes’ drive from the centre of Bath, Claverton Manor is an imposing neoclassical building set within a quintessential English landscape. Where you might expect a broad manicured lawn, however, today you will find large borders filled with exciting combinations of grasses and perennials. That’s because it is home to the American Museum & Gardens, and surrounding it weaves a bold, unashamedly American garden designed by the landscape architects Oehme, Van Sweden (OvS).

Based in Washington DC, OvS had its beginnings in the 1970s when Wolfgang Oehme and James van Sweden trail-blazed a new movement in garden design in the United States. They sought to rebuke the tyranny of the lawn and ‘foundational planting’ often seen as the hallmark of American gardens. Through their designs they sought to evoke the grandeur of the American prairies – and in doing so they introduced a completely new palette of plants to clients willing to try something different. Their approach became known as the New American Garden style and it revolutionised garden design in the United States.

Now this style has been brought to England. The 2.5-acre New American Garden at the American Museum was opened in September 2018. The museum’s board of trustees had a number of aims in mind, but the most important was to make more of the enviable location that Claverton Manor enjoys. The garden was designed to enhance the setting aesthetically, but also to open up and improve the overall accessibility of the site, especially to wheelchair users, and to create a much more welcoming entrance to visitors.

A turf amphitheatre, designed by Tom Chapman, the local landscape architect who managed the project, nestles gracefully into its natural topography.

The design hinges on a sinuous, circuitous pathway that took inspiration from Thomas Jefferson’s Monticello. This path, called the Winding Way, allows visitors to stroll through the plantings and to take in the glorious panoramic views of the Limpley Stoke Valley. A turf amphitheatre, designed by Tom Chapman, the local landscape architect who managed the project, nestles gracefully into its natural topography. Here the museum is able to hold outdoor music and theatre events.

The planting is cared for by a dedicated team of four gardeners and four volunteers. It is now into its second growing season and has gone from strength to strength. Large swathes of Lysimachia clethroides, the gooseneck loosestrife, has rapidly colonised the borders around the amphitheatre, creating pillow lava mounds of green with curling sparks of white flowers. It is punctuated by burgeoning clumps of tall Miscanthus x giganteus ‘Aksel Olsen’. Other grasses, including Miscanthus sinensis ‘Yakushima Dwarf’ and Deschampsia cespitosa ‘Goldtau’, capture more sunlight in their feathery plumes each autumn.

Large swathes of Lysimachia clethroides, the gooseneck loosestrife, has rapidly colonised the borders around the amphitheatre, creating pillow lava mounds of green with curling sparks of white flowers

Perhaps the most dramatic facet of the planting, and the one which draws most attention from visitors, are the alliums. Over the past two autumns we have planted around 15,000, a third of which are the lofty ‘Summer Drummer’. The large scale of the garden and the panoramic stage of the valley allow us to go big, and in true OvS style, they provide pure theatre in such numbers. The drama builds quickly through spring as they strike vertically upwards before the pale purple flowers cast aside their papery sheaths in July. At the end of this month, the sheaths will be gone and the flowers will be six inches across and tower on sturdy stems at seven feet.

Another unusual allium is ‘Red Mohican’. It is superbly and aptly named; each one looks like a funky punk of a flower uninterested in conforming to normal allium appearance. With each one having a spiky tuft of jammy red flowers, they look like plummeting plum puddings blazing a fiery trail as they hurtle on a collision course into the planting below.

There are also hundreds of daylilies creating great splashes of orange and yellow in the borders like a fruit salad. Hemerocallis lilioasphodelus is a pale yellow variety with simple, open, scented petals held in clusters on long, thin stems. Its beauty is understated; it whispers rather than shouts for your attention. Compare this to nearby ‘Happy Returns’ and ‘Summer Wine’, both of which have cheery names, bold colours, and heavy-set blooms that rumble in the border.

Not everything has gone according to plan, of course. A very wet winter proved fatal to a number of warm-season grasses that were moved last autumn. Schizachyrium scoparium, a prairie grass also called little bluestem, was particularly hard-hit. An unusually dry spring this year has stressed a number of large American viburnums that are key OvS plants. Gardens, however, are not static; failures become opportunities to try something different – and this is a bold new garden on the doorstep of Bath that’s not afraid to break the mould.

What comes next? The new Children’s Garden is set to open in August in time for families to make the most of the schools holidays. There is free parking, a café, and booking is not required.