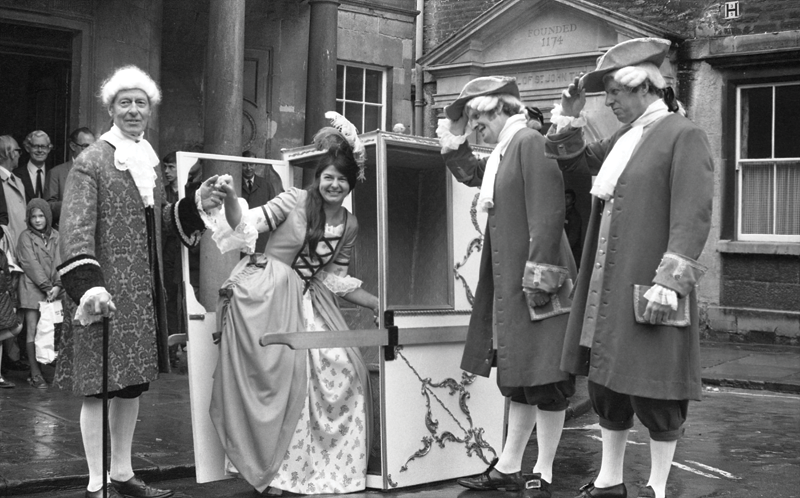 Taking it sitting down: the history of the sedan chair in Bath

Samuel Pepys visited the Baths in one, Princess Amelia journeyed from London to Bath in one, and both Charles Dickens and Jane Austen wrote about them – sedan chairs, those curious boxes on poles carried by two men; once a common sight around cities such as London, Edinburgh, and of course Bath.

Introduced into England from the Continent in the 16th century, and initially the preserve of the rich, it wasn’t until 1634 that sedan chairs came into public use, thanks to Sir Saunders Duncomb who obtained a 14 year licence to hire out his own hackney sedans in London.

The city of Bath was perfectly suited to the adoption of this new mode of transport. Before the building boom and expansion in the mid-18th century the city was contained within the city walls. Pedestrians, traders, horses, and carriages would all compete for space in the narrow congested streets. The more manoeuvrable sedan was perfect.

As the city expanded and the influx of fashionable, and rich, visitors increased, the sedan chair gained in popularity as a means of ensuring expensive clothes and wigs were not tainted by the weather or the filth of the streets.

Bath had two types of sedan chair. The original Bath chair was not the wheeled version that superceded the sedan in the mid-19th century, but a smaller lighter version of a “hackney” or public-use sedan. Bath chairs also had shorter poles, and their increased manoeuvrability was perfect for their intended use, which was to convey the sick and infirm from their lodgings to the Baths and back again.

The Mineral Water Hospital even had their own exclusively designed chairs for use by their patients. People could literally be picked up from their beds, carried through the streets in relative privacy to take the waters, before being bundled back into bed by the very same chairmen, as John Macky recorded in 1720: “The chairmen, whatever storey you sleep on, come to one’s bedside, strip you, give you their dress, wrap you in blankets, carry you off . . . and then after bathing you are carried home.”

Initially chairmen were unregulated and could charge anything from 6d to five shillings for a ride of 600 yards. In 1707 an Act of Parliament gave the Bath Corporation the power to licence up to 60 sedan chairs. By 1708 fares were also set – 6d within the city walls, 6d for waiting, and one shilling if travelling from within the city as far as St James’ or St Michael’s parishes.

Over the years there were further amendments to the fares as Bath expanded outwards, and uphill.

Chairmen’s licences cost three shillings per sedan, and the fine for running an unlicensed chair was 13s. 4d per offence. Just like taxis today each licenced chair had an identifying number which had to be clearly painted on the front, back and top of the chair. The chair and names of the chairmen (the ‘pair’) were recorded annually at the Guildhall. By 1794 there were 250 licenced chairs in the city, and each ‘chair and pair’ details were posted up for public consumption in the Pump Room.

It appears there was no requisite height to become a chairman, but one had to be fit, strong and healthy. A sedan chair could weigh around 60lb before a person even sat inside. The chairmen of Bath wore a uniform of blue tunic or coat which could be tucked up behind them when on the move; black knee-breeches, white stockings or gaiters, buckled shoes and a large cocked hat.

Each hackney sedan had to be 5ft 3ins tall and 2ft 2 ins wide, painted black, with the chair number in white. The inside of the chair was upholstered, while windows around three sides enabled the traveller to see out if they wished, but curtains allowed privacy and anonymity if required. The roofs of the chairs were all hinged, enabling ladies and gentlemen to enter the chair without stooping.

The growing fashion in the late 18th century for elaborate headdresses, hats and wigs caused some consternation to the sedan chairmen however: ‘We’ve always endeavour’d to make you sit easy, And modell’d our chairs to your fancy and taste; But now we despair any longer to please ye Since your heads are grown double the length of your waist.’ [Bath Chairmen’s Petition, 1770]

REVIVAL: Left, demonstrating that carrying a sedan chair – even empty – is no easy feat. Sedan chair racing was an annual event until recent years – right is the 1982 race. Pictures: Bath in Time

Sedan travel was not about comfort or economy. Restricted by size and shape, only one person at a time could travel, and being carried aloft, and at speed, on long poles would have seen the chair bounce and swing considerably. Sedan travel was about fashion and status.

Those that could afford to could have their own bespoke sedan made. Private chairs could be upholstered and painted with family crests and coats of arms, with your chairmen in matching livery. Private boxes in the 18th century could cost around £60 (£4,000 today) to buy, and that didn’t include the cost of retaining men to carry them. For those who didn’t own their own sedan, but were visiting Bath for the season, hackney chairs could be rented out per week.

The Chairmen of the Georgian era had a reputation for being violent and prone to profanities. Any misdemeanours, fines, arrests and dismissals were all recorded in the city’s Licencing ledger. In 1754 alone six sedan chairmen were fined between one shilling and 10 shillings each for swearing on duty. In the only extant Bath Chairman’s Book (1741-1756) entries for assault are infrequent, however other incidents are recorded – one pair refusing to carry a fare and a chairmen who refused “to assist his partner in carrying his chair.” In 1750 Charles Redman of Chair 35 was the subject of a complaint by Irish Guards who reported indignantly that he “farted at them.”

Just like taxi drivers today, sedan chairmen had to amuse themselves while waiting (in all weathers) for a fare. Many had dogs to keep them company, for others drinking and gambling was not uncommon. The Marlborough Tavern, and The Coach and Horses Inn in Barton Street, were well known haunts for chairmen to drink in. If a chairman over-imbibed he ran the risk the following day of a Mock Funeral. Traditionally the hungover chairman would be paraded around the city, culminating in a wake at his favourite pub at his (the corpse’s) own expense. Again just like modern taxis, licenced sedan chairs could be picked up from ranks of which there were 22 around the city, all indicated by blue posts.

Alternatively one could shout “Chair, Chair!” which would bring the waiting chairmen running.

Chairs could be hired between 6am and midnight, although fares doubled for any period outside these hours. At night-time sedan chairs were accompanied by a link-boy who would be paid a farthing to run ahead with his link or flaming taper, illuminating your way. Today there are still some link extinguishers, known as “link-horns”, attached to Georgian homes in Bath; a testament to life prior to street-lighting.

Once the streets of Bath would have echoed to the shouts of “Chair, Ho!” (incidentally where we get the word “Cheerio” from), “Have a care!” and “By your leave!” and this was the pedestrians cue to leap out of the way of the hurrying chairmen. Sedans had the right of way on the pavements and went at quite a pace, often running close to the walls of buildings to follow the least line of travel.

Although the sedan chairs were perfect for Bath’s narrow streets, the practicalities of two men carrying one person could never justify the cost. Use of sedan chairs was limited to the sick, or the middling and upper classes who could afford to hire a chair.

As the number of visitors to Bath declined in the mid-19th century so did sedan chair usage. In 1855 Thomas Jeans writes of only one or two ‘mouldy old sedans remaining.’ By the mid-19th century the more practical, and cheaper, wheeled Bath chairs and horse-drawn flys had taken over.

Attempts have been made over the years to re-introduce into the city the sedan chair as a business venture; most notably by John Cuningham in the 1970s. The annual Great Bath Sedan Chair race (1982-2006), although more for entertainment and fundraising purposes, was also another resurrection period for the sedan. With the ever increasing influx of students and workers in the city, and ever decreasing parking spaces, perhaps it’s time to reconsider resurrecting the sedan chair once more.

You can have your photo taken in a sedan chair as part of World Heritage Day at the Assembly Rooms in Bath on Sunday 17 April from 11am to 4pm.

More on the history of Bath: