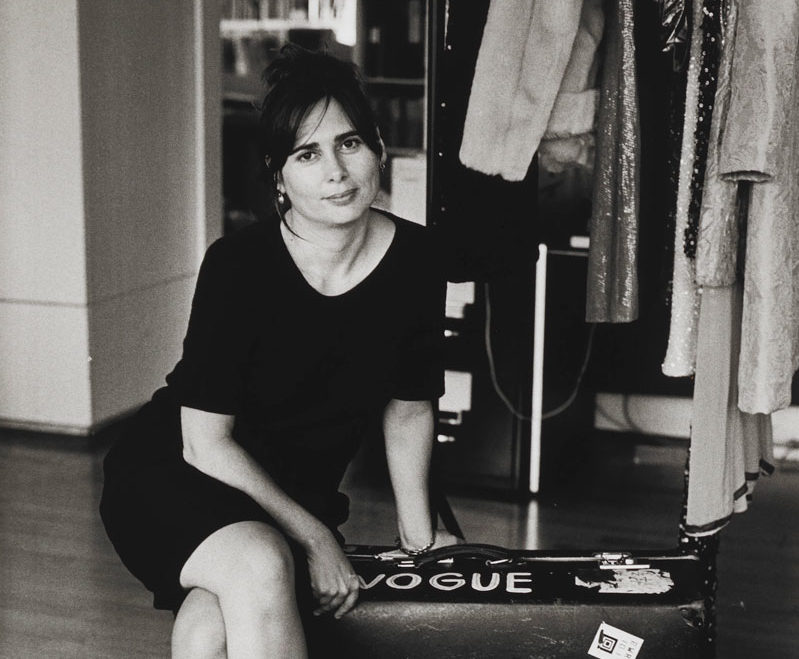 Stories of style: an interview with Alexandra Shulman

Editor in Chief of British Vogue for a quarter of a century, Alexandra Shulman has a few stories to tell. Melissa Blease talks to her about her new book, a collection of cameos about aspects of clothing and their personal value

“I am wearing a loose-knit sweater in a disrupted rainbow of faded colours. The sleeves are over-long, reaching to my fingertips and the whole baggy jumper hangs to mid-hip…”

Sound familiar? Probably; after all, the wearing of such comfortable, familiar jumpers is what got us through the everyday day when there’s nothing on the agenda and nobody around to care what we wear. It is not, however, the sort of item one would expect Alexandra Shulman – the woman who was for a quarter of a century the 10th and longest-serving Editor in Chief of iconic fashion magazine British Vogue to highlight in her 2020 book Clothes… and Other Things That Matter as an item that – well, matters.

“Neither did I!”, says Alexandra, with a laugh. “But when I left Vogue in 2017 I had absolutely no idea what I was going to do, which is most unlike me – I’m not a reckless person or a chancer, but leaving was a flash decision to just jump. I knew that one way or another I’d survive, but it was quite a shock to the system and, as the weeks went by, became a bit nerve-wracking.”

So how did the nerves unwrack? “I’d written books before including Inside Vogue, which was a diary of the magazine’s centenary year in 2016,” Alexandra explains. “And I’d been keeping track of the process of leaving my role and the aftermath – that was potentially the book I thought I was going to write, but for one reason or another it didn’t make sense to write a straightforward memoir. So I sort of fumbled my way towards Clothes…; it came about as I was writing it, really.”

We had pavilions showcasing collections from designers such as Chanel, Versace, Valentino, Burberry and Armani…

The result is a highly captivating, intensely personal collection of cameos that focus on the items of clothing and accessories that bring meaning to our lives as we negotiate the world from childhood to romance, motherhood, career and beyond, taking in body image, social commentary and fashion history along the way. Our clothes, you see, tell many stories – and Alexandra has told many of those in her book.

As we all know, even a straightforward wardrobe clear-out is often too big a task, both physically and emotionally, to undertake without bouts of procrastination; how on earth did Alexandra select which of her treasured sartorial memories would make the cut for the book?

“I simply wrote about the pieces I felt I could write something about,” she says. “Red shoes, for example, which is the first chapter in the book. Like many women, I owned my first pair of red shoes in my childhood, so it was a good starting point. But that led on to the idea of red shoes, and how and why women who don’t want to be flamboyant in other areas will choose to wear them. From there, I found myself writing about connections to red shoes such as Dorothy and the Yellow Brick Road in the Wizard of Oz and what that meant, and that’s when I saw the shape of the book: personal, but relatable to all. There’s another chapter about Juicy Couture tracksuits, which is personal to me but also about a moment in time that we all shared: 9/11, a period where you would have thought everything would change, but people were still wearing Juicy Couture – it makes sense, in the book! But at the end of the day, anybody could have written this book, because everybody’s got their own stories about their own clothes.”

The daughter of Canadian author and critic Milton Shulman and British etiquette doyenne Drusilla Beyfus began her career in fashion journalism after taking a job as a secretary at fashion and lifestyle magazine Over 21 in the early 1980s before going on to write for Tatler and becoming editor of British GQ in 1990. As well as publishing two novels, she’s written columns for national publications, and was awarded an OBE for Services to the Magazine Industry in 2005 and a CBE for Services to Fashion Journalism 12 years later.

On taking to the helm of Vogue in 1992, Alexandra presided over a massive circulation increase and a much higher profile for the magazine. Remember the Vogue Millennium Issue, with an ingenious mirror-like finish that put the reader on the cover? That was Alexandra. What about the 1997 Diana, Princess of Wales Memoriam Issue featuring the princess as photographed by Patrick Demarchelier, or the Gold Issue in December 2000, featuring Kate Moss in stark, blacked-out silhouette? Alexandra again. But beyond those covers….

“One of the biggest high points of my Vogue tenure was getting the job in the first place!” Alexandra recalls. “That moment was a wonderful one indeed. On from that, a lot of the high points were around very special moments such as the It’s Fashion fundraising event for Macmillan Cancer Relief in 2001, held at the Rothschild’s Waddesdon Manor in Buckinghamshire. I had this idea to base it around the Field of The Cloth of Gold summit meeting between the Henry VIII and King Francis I of France in 1520, with pavilions showcasing collections from different designers such as Chanel, Versace, Valentino, Burberry and Armani all in their own little courts, as it were, followed by a gala dinner attended by Prince Charles, Madonna and Kylie Minogue, among others. Amazingly, it happened! And for me that was a huge achievement; a lot of hard work, but well worth it. And in the magazine’s centenary in 2016: to be Master of Ceremonies as we celebrated 100 years of British Vogue at the National Portrait Gallery exhibition and realising that I was the custodian of such an incredible legacy was beyond amazing. Those are my stand-out memories. There were obviously individual editorial moments that were absolutely thrilling too, but it’s difficult to pick just one out.” And the lows? “For every high there were many lows,” she says; “the trick is to remember the highs – that’s true of life in general.”

There’s much more of that subtly optimistic philosophy woven into the fabric of of Alexandra’s book…. But on a less profound level: what are the worst fashion trends bugging her now?

“In my opinion, those dreadful prairie-style, smock-like dresses with big collars, on a sort of puritan theme. There’s something about the idea of women dressing in this kind of Little House On The Prairie way that isn’t saying anything terribly good about women. When we look back on the prairie thing as a major fashion trend, I wonder if people will connect it with the time when time moved back a bit because of Covid; back to spending much more time in the kitchen, doing the ironing, doing the dusting… and women being dressed for the part? I believe that connection will be made.”

So if that’s the bad news about right here, right now, what, for Alexandra, would her favourite fashion era be? “I think everybody loves the era when they were a teenager really, because that was the time you probably felt most passionately about the clothes you chose to wear,” she says. “For me, that would be the 1970s; I loved – and still love – the clothes from that time, and back then I felt so emotional about clothes in a way that I’ve never really felt since.”

As Alexandra told comedian Viv Groskop in a 2012 Evening Standard interview, “my heroines were singers like Joni Mitchell, Patti Smith or Carly Simon; I didn’t think about whether they wore Chanel or not.” But as editor of Vogue, surely such considerations are crucial? “When I was at Vogue I largely dressed for an executive role. But now that I can just wear what I want to wear, I veer back dangerously to the 1970s on a daily basis!”

The 1970s – or that beloved jumper that we ‘met’ back at the start of this interview. “When it came down to it, jammed into a plush booth late at night in a foreign city, I yearned to be back at home with a half of lager and lime in a Hammersmith pub wearing something utterly unglamorous and asexual like my Sloppy Joe.” Alexandra says. Now there speaks a woman who knows what matters the most.