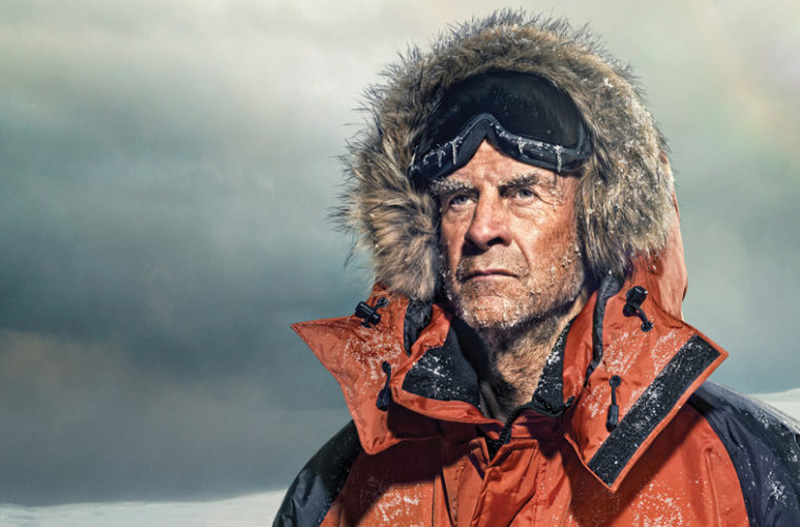 As many of us start to dream of freedom and plan our post-pandemic lives, with some looking forward to the first trip abroad and others training hard for postponed sports events, the thrill-seekers amongst us have used lockdown to invent ways to push themselves further and faster than ever before. According to a recent survey, skydiving and mountain climbing are amongst the top five extreme challenges that Brits want to take on after isolation. So, are we set to see a wave of new talent push the boundaries like never before?

This reminded of us of the time that The Bristol Magazine – our sister publication – spoke to Sir Ranulph Fiennes, the world’s greatest living explorer, who has risked life and limb in some of the most ambitious private expeditions ever undertaken. Here, he chats about Enya, ‘shuffling’ round the Serpentine, his vertigo, and what was the key to conquering Everest.

Sir Ranulph Fiennes, the world’s greatest living explorer, as he was named by the Guinness Book of Records, has spent his life in pursuit of extreme adventure. Among his many record-breaking achievements, he was the first to reach both Poles, to cross the Antarctic and Arctic Ocean, and to circumnavigate the world along its polar axis. In 2019 at Bristol Hippodrome, Sir Ran took his audience on a light-hearted but poignant personal journey from his childhood and school misdemeanours, to army life and early expeditions, right through the Transglobe Expedition to his current Global Reach Challenge – his goal to become the first person in the world to cross both polar ice caps and climb the highest mountain on each of the seven continents.

…When I was first asked to climb Everest, I said no because of my vertigo. Last August at home, the gutters got full of leaves, I sent my wife up while I held the ladder…

As a man who seems fearless, is anything that you worry about?

I don’t really worry about expeditions. I only really worry about family finances. All those horses that Ginny loved! When we moved to Exmoor, we had lots of Aberdeen Angus cows and sheep, and that was quite profitable. But the horses…

Are there any expeditions/challenges you would still like to conquer?

There’s one thing that I wish I had tried doing earlier. At the moment I still hold the world record for being the only person to have crossed the whole of that Antarctica ice cap, the whole of the northern ice cap and to climb the highest mountain. It’s called the Global Reach Challenge and I’m the only person to ever have done it. There are two other people who have nearly done it – a Norwegian and a Belgian, both of whom I am friends with now. The record I would like to have broken is to cross all the ice caps and climb all seven of the highest mountains. Everest is the most difficult, I’ve done that. And if when I’d done Everest I had done the minor ones, that would have been no problem. It was 2009 and I was in my 60s and quite fit, but when you’re a bit older, things start to go wrong. Your circulation heads towards your core so if you have ever gotten frost bite, you are even more likely to get it again. The mountains you can actually climb when you are in your 70s have to be much lower than the ones you could have climbed before. There are only three of them out of seven I haven’t done, so it’s very annoying. I’m sure someone else will complete it soon.

So you are quite competitive?

I am, and it’s not a good trait. When I was first asked to climb Everest, I said no because of my extreme vertigo. Then six months later my wife died and I just wanted to do something, anything to distract me. So I did months of training and then had a heart attack when I was 300 metres from the top and my friend got hypoxia on the way down. I told the doctor when I got down to base camp that I was never trying it again but he told me that if you go up the other side, from Nepal, it’s dead easy! Four years after that, 2008, I did and nearly got to the top, (didn’t get a heart attack) but the body of my Sherpa’s father appeared in the snow, as he had previously died trying to climb Everest. There hadn’t been that much snow that year so the bodies just reappear. It was awful. The next year, 2009, by which time I was an OAP, I had worked out why I had failed twice: I was being too competitive. The next time I tried, I went with a Sherpa who was so fit, there was no point in trying to be competitive. I went very slowly that time.

What do you do to relax?

To relax, I sleep! And listen to the music of Enya. In between my lectures I run around the Serpentine a couple of times. I don’t call it jogging though – it’s more ‘shuffling’.

In many people’s minds you are already superhuman – but if you could choose a super power what would it be?

My superpower would be to not have extreme vertigo… When I was in Dubai recently, they wanted me to go on the world’s highest zip wire and break the record of going 160mph, and I said yes because I didn’t want to be unpopular with the client. I sort of opened my eyes as we left the platform, but I then kept them shut for the rest of the ride! When I did the north face of the Eiger, I was being led by this guy who has done Everest 11 times. He is very clever at teaching his climbers how not to get vertigo temporarily. It’s pretty simple – don’t allow yourself to think below your feet at all. It seems obvious but don’t look down! Last August at home, the gutters got full of leaves, and I was too scared so I sent my wife up while I held the ladder. The north face of the Eiger has killed off 80 people but I could only do it because of that guy. Can I have two superpowers? I have pre-diabetes, and if I don’t behave myself, I could get type two diabetes, meaning that I could never have sugar again. My favourite food in the world is vanilla ice cream with hot chocolate sauce, so my superpower would be that I could eat all the sugar I wanted and still be healthy.

Who would you like to play you in the film of your life?

Which person do you most admire, living or dead, and why?

One of the people I admire the most is the polar explorer Captain Robert Falcon Scott. I’ve just written a book on him that tries to get to the truth of his wonderful career, as there are a lot of lies and rumours about him. He first discovered that Antarctica was a continent! But he had bad luck with the weather on his expeditions, and died in his tent. I also really admire the explorer Wilfred Thesiger, who carried out lots of expeditions in intense heat.

Who would you invite to your dream dinner party?

Honestly, I would invite my wife to my dream dinner party. Although
I would also like to invite Jesus to make sure I haven’t wasted my time in believing in him. And maybe Stalin, Hitler and Mao so that I could poison them before they had done all their damage.

If you could go back in time, what time period would you travel to?

I would travel back to 1415. I would have preferred to live in the pre-digital age.

With the threat of climate change more apparent than ever, what would you urge the younger generation to change?

Sorting out the plastic in the ocean is a good start, rather than trying to tackle things you can’t even see. Everyone can do something about that, whereas something complicated like tackling carbon monoxide is more difficult to get the public interested in. If the whole of the motor industry had to switch to electric vehicles, that would be good – then we would be heading in the right direction.

What is your next adventure?

Ah! The trouble with this question is that the enemy are constantly listening to what we are planning. If it’s a first, you don’t want to let anyone know, so unfortunately, I can’t divulge as to what I am doing next. You’ll just have to wait and see…!

Featured image: The first time Sir Ran attempted Everest he had a heart attack, the second time the body of his Sherpa’s father – who had died trying to climb the mountain – reappeared due to the lack of snow. The third time he succeeded. (image by Gary Salter)