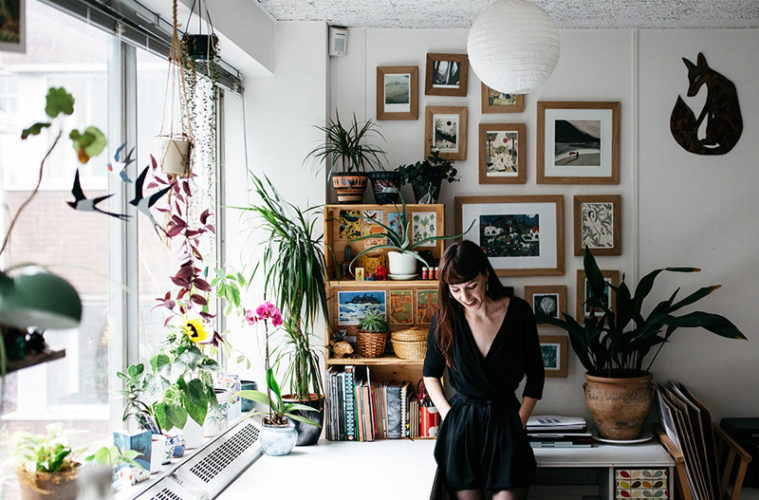 The delicate work of illustrator Rosanna Tasker, who created the illustration for this month’s magazine cover, has a serenity and peace that makes you wish you were actually in her illustration world. Millie Bruce-Watt chats to the artist about her work, what inspires her and how in turn she’d like to inspire others.

Rosanna Tasker’s illustrations seem to be the very essence of peaceful beauty. A palpable sense of serenity hangs close to her delicate drawings and the idyllic landscapes of her invented worlds create a form of escapism. With natural beauty appearing to be the common thread that binds Rosanna’s work, we are reminded of the calmness of nature, the richness of organic foods, the unrivalled quality of a local market and thereby the benefits that they offer us.

With this issue focusing on the importance of supporting our city’s local producers, Rosanna wanted her cover illustration to illustrate the joy and mindfulness of buying British. “I wanted the cover to celebrate the rich colours, tactile textures, varied patterns and details of fresh fruit and veg. There are so many wonderful benefits to going smaller scale with food production and the way we choose to shop, but I ended up focusing the illustration on the simple aspects of buying British on a more personal level; to express the joy and mindfulness of shopping for local, fresh ingredients at a farmer’s market and admiring your bounty on the kitchen table when you get home.”

Rosanna – who grew up in Shropshire and has lived in Bristol for eight years – achieved a first class honours degree in illustration at the University of the West of England in 2014. After she graduated, she was lucky enough to get regular work with local company Moon Architect and Builder.
“At least for two years they were my regular clients, giving me different types of projects. It was so unusual to have a client to start off my illustration career. I really owe a lot to them for getting me used to landing on my feet straightaway.”

Rosanna went on to set up her own studio in Hamilton House in Stokes Croft before moving to her current space in St Pauls where she has produced work on a commission basis for the likes of The New York Times, The Guardian and The Washington Post to name just a few, developing her style and refining her techniques. By drawing and painting onto separate layers of rich paper before finishing the illustrations digitally in Photoshop, Rosanna is able to create unique hand- crafted pieces. She says, “A lot of people do things entirely digitally, but I want that hand-drawn, hand-painted look. In order to do that for clients where they need changes, I hand paint all the colour and draw any elements on separate bits of paper, then scan it and put it together in Photoshop. That means if there was suddenly some extra text that needed adding, I can just move the tree slightly rather than re-paint the entire thing… Illustration is really unique because of the fact that you can be really playful with it. There are not really any rules to being a good illustrator.”

With the use of fine pencil lines and gouache paints, Rosanna endows her characters with poise and elegance. Her admiration for Golden Age fairy tale illustrators like Edmund Dulac, Kay Nielson and Arthur Rackham, from whom she takes much of her inspiration, also shines through. It almost makes you wish that you too lived in the worlds that she creates. “The motivation for me is the creativity of it. I get thoughts and ideas all the time… Sometimes I’ll have an idea and I haven’t done it yet and it’s burning in me… I think it’s integral in me and it forces me. It’s like I don’t have a choice, I just need to get it out sometimes.”

Bristol itself has also had a profound effect on Rosanna’s work. Its pockets of creativity and the levels of artistic opportunity for up-and-coming illustrators helped Rosanna build her career. The artistic community has also warmly guided her through the process of artistic self-discovery. “The community is such a beating heart in Bristol. I feel like that’s made it possible, really, not so much the impact on my work itself but it’s made being a freelance illustrator possible and enjoyable.”

Having grown up surrounded by the great outdoors near the small historic town of Ludlow, Rosanna often reflects the happiest memories of her childhood in her work. She says, “We lived right in the countryside and it was down a dirt track. There were about four houses and there were several children there all around the same age and we spent 24/7 outdoors and running around.

“I feel like that had a really big impact on the type of subject matter I was interested in. I also never thought that I’d want to live in a city. I came to Bristol and I thought, “This is what a city’s like; this is amazing.” It’s got everything going on – it’s special in terms of creativity.”

With the dream of creating a children’s book at the forefront of Rosanna’s mind, her ambitions are ultimately very simple. She would like to one day inspire a child to embark on a similar path of creativity.
“I think the main goal is to inspire people’s imaginations, not only for me to express what I’m wanting to say or what I’m wanting to draw but, also, for that story or those images to really spark something in a child, that would just be amazing. I think back to the books that I had when I was a child and how that really built my imagination. Those wonderful ideas and imagery formed my own imagination, or at least helped it, and fuelled the fire, so to be able to do that for someone else would be very special.”