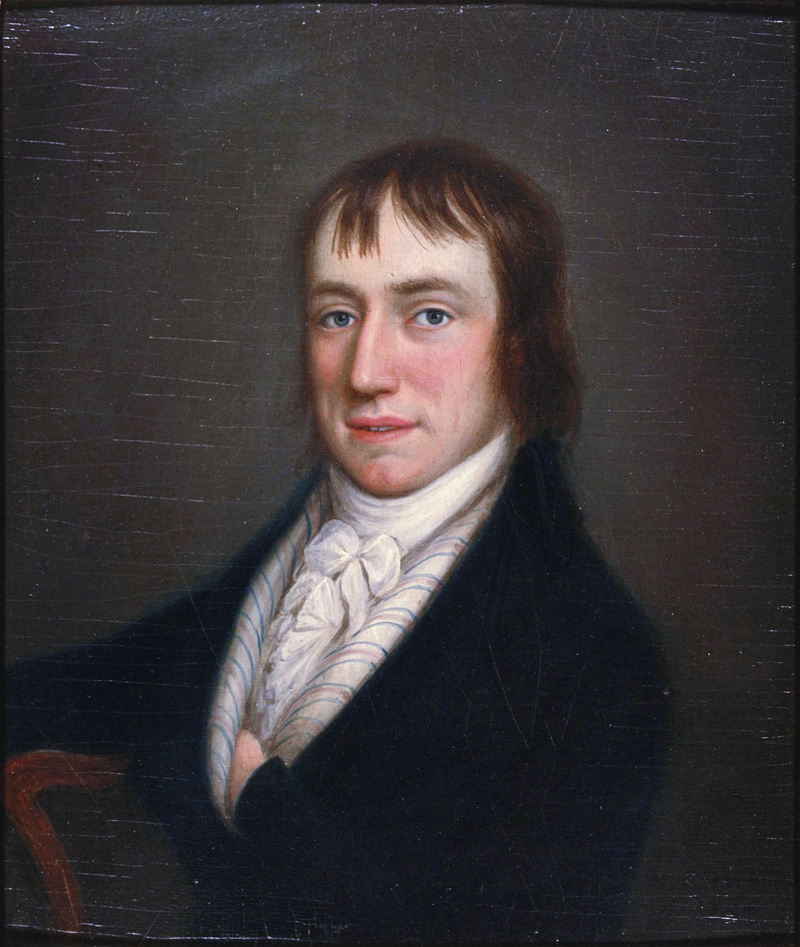 Romance in the city: William Wordsworth in Bath

Bath has welcomed the fashionable and the famous, including literary giants such as Jane Austen, Sir John Betjeman and Charles Dickens. The poet William Wordsworth visited Bath on numerous occasions and on the 250th anniversary of his birth, historian Catherine Pitt looks at his time in the city.

The first time William Wordsworth (1770–1850) visited Bath was in 1793. He was 23 years old and had just returned from a walking tour through Europe where he’d been gathering inspiration for his poems.

There is very little evidence about Wordsworth’s time spent in Bath during the four years he spent in the city at that time. He was not yet established as the renowned Romantic poet, but he was prolific in his writings. It is likely that he would have worked on the collection of poems known as An Evening Walk and Descriptive Sketches during his stay in Bath, for they were published the same year.

In 1797 Wordsworth and his sister Dorothy, also a poet, moved to Somerset a few miles from their friend and fellow poet, Samuel Taylor Coleridge. Dorothy was a huge influence on Wordsworth, and he relied on her as a muse and inspiration. After two years he moved to the Lake District where he began a family with his wife Mary. But Bath was not forgotten.

During the 1830s the Wordsworths, now including sons John, William (known as Willy), and daughter Dorothy (known as Dora), would make the long journey south to visit distant relatives and friends in Bath. In the spring of 1839 Wordsworth took his sickly son Willy to partake of the spa waters in the city.

From family letters we know the poet’s movements in Bath were really no different to any other spa visitor. Wordsworth would take the waters in the Pump Room and enjoy long walks in the surrounding countryside. In the evenings the family would enjoy “dining at Mr Popham’s”.

An account in a letter from Mary Wordsworth, written in Bath between 10 and 14 April 1839 says, “Father is wonderfully free from inconvenience in his eyes and walks everlastingly.”

The Wordsworths had five children together, but two died in childhood. The only surviving daughter, Dora (born 1804), was named after Wordsworth’s sister, and she showed the same intellectual prowess as her aunt. Indeed Wordsworth was as obsessed with her as he was with his sister. He heavily relied on Dora, especially when his eyesight began to fail in the 1820s, and she often assisted him with proofreading and other tasks relating to his works. Wordsworth was extremely jealous of anyone who threatened this perfect familial and working relationship.

Dora grew into a beautiful and intelligent woman. She developed a fondness for family friend and budding writer Edward Quillinan. After Edward’s wife’s death in 1822 the pair became even closer. Edward was, however, considerably older than Dora, and not financially secure. Wordsworth was adamant that there was to be no question of a relationship, so for years their courtship was hidden in letters and clandestine meetings.

“I feel as if I could never be a blessing to your home unless I took with me my parent’s blessing sealed with a kiss”, said Dora in a letter to Edward on 26 February 1841. The couple wished to marry but Dora feared her father. A mutual friend to all parties, Isabella Fenwick, acted as mediator between the distraught poet and his upset daughter, and with much reluctance on Wordsworth’s part, Edward and Dora became engaged at the end of 1838.

Wordsworth refused to attend the wedding if it was to be in the Lake District. Fenwick suggested a more neutral ground may be better. Bath was chosen for the forthcoming nuptials as the journey there could incorporate a family trip down memory lane, retracing Wordsworth’s steps on his tour of 1793.

With the help of Miss Fenwick, Dora and Edward arranged their wedding for 11 May 1841 at St. James’s Church near Southgate – now the site of Marks and Spencer. Dora’s elder brother, Reverend John Wordsworth (1803–1875), was permitted to conduct the ceremony. Dora was 38 and Edward was 49, and had two children by his late wife.

After visiting the Wye Valley and Tintern Abbey the Wordsworth and Fenwick families were announced by the local paper as having arrived in Bath on 29 April 1841. Their lodgings were to be at 12 North Parade (not number 9 where a plaque has been placed erroneously).

“I do sincerely trust that nothing will interfere with (the marriage) taking place on that day. Mr Wordsworth behaves beautifully,” said Isabella Fenwick in a letter to Henry Taylor on 6 May 1841.

A wedding had taken place just before Dora and Edward’s and the clergy of St James’ saw the potential in making some money on the back of a famous poet’s daughter, and possibly getting a sight of the man himself, so guests from the previous wedding were invited to remain in the upper gallery at a charge of a guinea a head.

Dora chose to wear a white dress, as had Queen Victoria on her marriage the previous year, which had begun a new trend. The bridesmaids were in lilac and pink with white bonnets, and Edward was dressed in white trousers, black boots, and a new blue frock coat.

It has been incorrectly recounted that Wordsworth attended Dora’s wedding, however we know from letters written by Edward Quillinan and Isabella Fenwick that although Wordsworth was present in Bath on 11 May, he couldn’t bear to witness his daughter’s marriage, and so remained at the lodging house.

Dora held out hope that her father would change his mind and arrive at the porch of St James’ but he didn’t, which unsettled the already nervous bride. Eyewitnesses describe how she walked unsteadily down the aisle on the arm of her brother Willy, accompanied by friends and cousins. At the altar she looked ashen faced and swayed during the service as though she was about to faint.

Once Dora and Edward had exchanged vows and the ceremony was over, the couple and guests returned to No.12 for the wedding breakfast. It is assumed that Wordsworth more than likely re-joined the group at that point. The family remained in Bath until June while the couple honeymooned in Somerset. Perhaps the most ironic part of Wordsworth’s behaviour towards his daughter’s marriage is that it is almost comparable to Wordsworth’s own wedding day to Mary forty years earlier, when his sister Dorothy was so distraught at the situation that she refused to attend the church.

In 1847 Wordsworth and Mary returned to Bath for around three weeks. At this point Wordsworth was nationally famous, having become Poet Laureate in 1843 on the death of his friend and fellow poet Robert Southey. The Wordsworths joined Miss Fenwick at her home at 8 Queen Square from 3 March to 18 April. It was another trip of pleasure and inspiration.

Wordsworth entertained various visitors in Queen Square as well as calling in on others lodging in the city, including Samuel Taylor Coleridge’s daughter Sara (a close friend of Dora’s), geologist Professor Adam Sedgwick and diarist Henry Crabb Robinson. When the weather was pleasant Wordsworth would go walking with Robinson “over the heights to Witcombe [Widcombe]”.

While in Bath Wordsworth was contacted by the University of Cambridge to create an ode for the installation of his Royal Highness Prince Albert as chancellor of the university. He began to work on it, but was unable to complete it, because he received bad news that meant the Wordsworths had to rush back to Cumbria.

The bad news they received was from Edward – Dora was gravely ill with tuberculosis. Returning to the family home the Wordsworths spent the final few weeks of Dora’s life by her side. On 9 July 1847 Dora Quillinan, née Wordsworth, writer and muse, died at the age of 42.

Dora was buried at St Oswald’s Church, Grasmere. In a field near to the family home at Rydal Mount – now owned by The National Trust – her parents planted a host of hundreds of golden daffodils in her memory. Wordsworth never returned to Bath, dying three years later in 1850 at the age of 79 at his home in Rydal Mount.

He is buried next to his daughter.