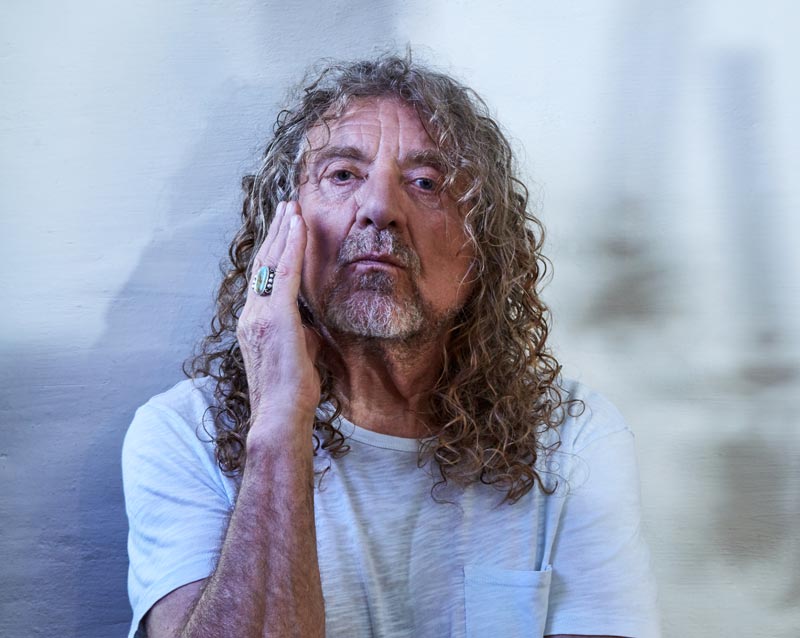 The absence of The Bath Festival this year has made us turn the pages back to when Robert Plant – aka the Golden God – came to Bath in 2018, performing with The Sensational Space Shifters during the finale weekend of The Bath Festival. Words by Emma Clegg

He christened himself a ‘Golden God’ in the ’70s and he has been voted in a poll by Planet Rock, “the greatest voice in rock.” Robert Plant will always be etched in the collective memory as the lead singer of Led Zeppelin. But this was just an epic start to a musical journey that has seen him exploring and reinventing his oeuvre for 50 years.

Performing in Bath is meaningful for Plant: “I’ve always thought that the Bath and Bristol area has thrown out so many amazing musicians – and three of them just happen to be in our band. There’s enough dynamism between Bristol and Bath to make it an exciting environment for us. So it’s a celebration, almost like a homecoming.”

Led Zeppelin performed at the Bath Festival of Blues and Progressive Music in Shepton Mallet in 1970. A young Michael Eavis came to the festival and later that year put on the first of what would become the Glastonbury Festival of Contemporary Performing Arts. “Who would have known that playing at the Bath Festival of Blues in Shepton Mallet would have had so much resonance that one sprightly farmer decided that it would bring him in a bit more revenue than his Fresian herd?” marvels Plant.

“In those spectacular days before there was anything like promotion, there was just a huge surge and the West Country was a great place to land – we [Led Zeppelin] played with Jefferson Airplane and went on until four in the morning back then. There was just a kind of resonance.”

The landscape of on-stage performing has changed somewhat since then, Plant reflects. “In the late ’60s when Led Zeppelin was formed it was still a game without frontiers, as we didn’t know too much about anything. I suppose really we were one of the first bands to play in massive places like big baseball stadiums in America – it was pretty gross to be honest. But now it’s turned into this amazing collage of light show and the whole deal is now like Star Wars versus Jason and the Argonauts.”

Where does Plant most like to perform? “It’s great to be in the middle of a festival because there’s a type of hypnotism that takes place within the crowd,” he explains. “But at the same time I like the intimacy of the theatre gigs that we do. So I’m happy anywhere really. I don’t feel I have to live up or down to anything. As long as it’s working beautifully and intensely onstage, then I’m fine wherever we go.”

Plant’s current tour features his second studio album with the Sensational Space Shifters, Carry Fire. The musical influences within it are far-reaching – there are blues, there’s folk, there are Eastern rhythms, there’s American Appalachian music and instruments such as E-bow, t’bal, and djembe. Plant explains that he has always been enriched by different genres of music: “I was drawn to the lure and the seduction of different musical scales, the scales that came from North Africa, the stuff that was not quite so much a cheery English folk song as a beautiful piece of music that was dramatic, whether it came from a beautiful Egyptian orchestra base from Cairo in 1955 or whether it came from the top of the Atlas Mountains where there is a kind of country feel where the rhythm of the music is just so seductive. It’s insane.”

But how does a song harness these musical themes? “I think we’re in a particularly prolific patch as writers and players and we’d had a pretty long tour prior to the beginning of work on Carry Fire,” says Plant. “And when you are working together four or five times a week, and travelling incessantly, you become more and more tuned in to the little nuances that you have developed during sound checks and conversations.”

“If we hear a musical link that we are pleased with as we play we mention it to the sound engineer and we get a copy of it. We stockpile pieces like that, so it was like piecing ideas together,” says Plant. “And when they suited they were in different keys and we could modulate and continue to change the keys. And in that way we created that trance-like groove that we deal as a band.”

Plant warmly recognises the contribution of the other band members: “I owe so much of what I am now to the guys I’m working with. We’ve played together in one way or another for about 15 or 16 years, so we read each other really well. Justin Adams (guitarist) is a Bath citizen and John Baggott (keyboards) and Billy Fuller (bassist) are Bristol guys and the whole deal is about this groove that we’ve got. There is no boss, really, just that kind of work and joy. I think it’s a great place for me to land in my time as a singer and writer. The effort was finding what we all had in common – then we could just develop it without being too intense and without reaching for the stars.”

In recent years Plant has developed successful vocal collaborations with other singers such as bluegrass country singer Alison Krauss in their Grammy-award winning 2007 album Raising Sand. “I admired her work, but I had never imagined that I could sing with her, or she with me,” Plant reflects. “So when I went to Nashville I took a bunch of more rock-and-roll type things with me. So I flew over and went to her house and sat on the table singing. And none of these things I could ever imagine doing in a rock band. Sitting at the table singing delicate songs. I think the idea of having a naked vocal with hardly any clamour around it at all was really a challenge and it was an inspiring result.”

He also worked with folk singer Patty Griffin, with whom he formed Band of Joy, and they produced a studio album of the same name in 2010. They were also romantically involved for a period and he credits Griffin as, “One of the most spectacular singers on the planet. She is a gospel singer, a white girl from the Canadian border and she just sings like she is bringing something down from the heavens. It’s spectacular.”

“I like the idea of changing my voice to fit who I am singing with,” Plant continues. “And right now I’m singing with myself and with Billy Fuller singing behind me. And that’s different again, but it can go from a whisper to a scream – Esther Phillips once sang a song called this and that’s basically what our world is like right now.”

“Topically, my gig is – apart from pushing my weight about with the other guys a bit too much – creating theme and melody. And always writing. Sometimes innuendo, sometimes irony, sometimes about the errors of my ways. And I try and use advanced topics that are in empathy with the music that we create. It’s a way away from rock, but at the same time it’s passion with a kind of muted, even more powerful explosion. It’s a night of arduous wrangling with volume. So it’s a pretty intense thing that we do and it’s loaded with power and energy so it gives me a great place to go when I want to make points from experiences in my life.”

Now 69, Plant has no plans to change his musical lifestyle, to cut back on his tours, to be less engaged in what he loves: “What is staying put but waiting for the next thing to do, you know? I live my life and if I took my foot off the gas maybe I wouldn’t be able to sing the way I am now. And if I ever thought I hadn’t got the chops the way I want them and I had to go out and fake it then it would be over. So I keep singing.”

“I’ve had many years in the sun being feted for the stuff in the past. But I’m in fantastic company to make something special for the present and the future. I’m a mature student. That’s how I feel, I’m learning constantly, having my eyes opened all the time to more nuances in what we do. So it’s good to come back to Bath to bring it round.”