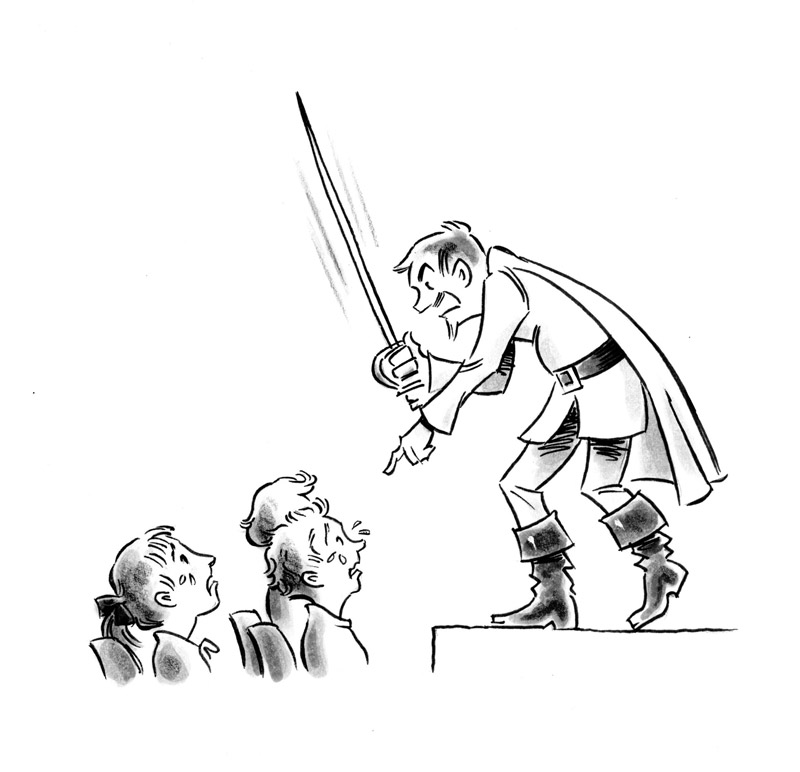 Recollecting on treading the boards one Christmas past…

What do we mean by a traditional Christmas? There are some generalised customs that the majority of us follow and transmit down through the generations. Most of us, for example, will put up trees and festive lights and over-indulge in gorging chocolates, mince-pies and mulled wine. But what about the more intimate traditions that are special to individual homes?

My elder sister and I always had to wait in bed while our parents – who we’d woken around 4am – went down to prepare the way. Dad lit a fire, mum made tea and then we gathered in the hallway – to wait for our grandmothers who were always the last down for the grand reveal.

The living room door was slowly opened and there before our enchanted eyes was a sea of colourfully wrapped presents, delivered by Santa, spreading out from beneath our decorated and aromatic pine.

The tree would kiss the ceiling, glowing with all the colours of the rainbow and radiating the warm magic of that first memory of each Christmas Day.

There’s another seasonal tradition that kicks in a couple of weeks before the big day that has helped build up the excitement for young and old since Victorian times. Pantomime!

This year’s offering at Theatre Royal Bath will be the 18th annual event that actor and general funny man Jon Monie has appeared in. However, it’s the first he’s actually written, from prologue to walk down. The story of Beauty and the Beast will no doubt have youngsters enthralled, but I wasn’t so sure it qualified as a traditional panto.

Jon told me the problem is that many of today’s youngsters are not up-to-speed with the stories behind productions such as Mother Goose or Babes in the Wood. If Disney has turned fairytale into film, however, kids will know it. That’s certainly true of the story of beautiful Belle and the handsome prince turned into a monster by a vengeful witch.

I was a little miffed about the Babes panto reference, as my only claim to professional theatre fame was treading the boards in 1989 in that very pantomime at Theatre Royal Bath. Little star-struck me then rubbed shoulders with real pros like comedian, producer and writer Roy Hudd, the late, great Geoffrey Hughes, bin man Eddie Yates from Coronation Street and Onslow from Keeping Up Appearances.

Also in the cast was Jack Tripp – then one of the best dames in the business, but he has sadly long ago exited stage right.

Those old enough to remember me as ‘Young Richard’ on HTV West News will no doubt appreciate the irony of my being cast as the baddie, the dastardly Sheriff of Nottingham. This character gets put in his place by Robin Hood, the hero, played by New Seekers singer and actress Lyn Paul.

Despite my lack of ‘evil’ experience, I rushed off-stage full of glee to tell everyone the first time l made a youngster in the front row cry. How’s that for acting?

I was also supposed to sing my own version of Michael Jackson’s Bad while fronting the professional panto dancers. The boys and girls were there to ape my moves and join in on the chorus. Roy wasn’t that impressed with my singing efforts so I ended up speaking the lyrics – a bit like Peter Sellers’ performance of the Beatles’ Hard Day’s Night, delivered in the style of Laurence Olivier’s Richard III.

Panto is often said to be a young person’s introduction to the theatre and I certainly hope my performance all those years ago won’t prevent anyone that was there from bringing their own grandchildren to enjoy this year’s offering.

One lasting memory I took with me from my curtain call that Christmas was being told as I came off from my walk down in all my finery and black tights that I had the best legs in the cast.