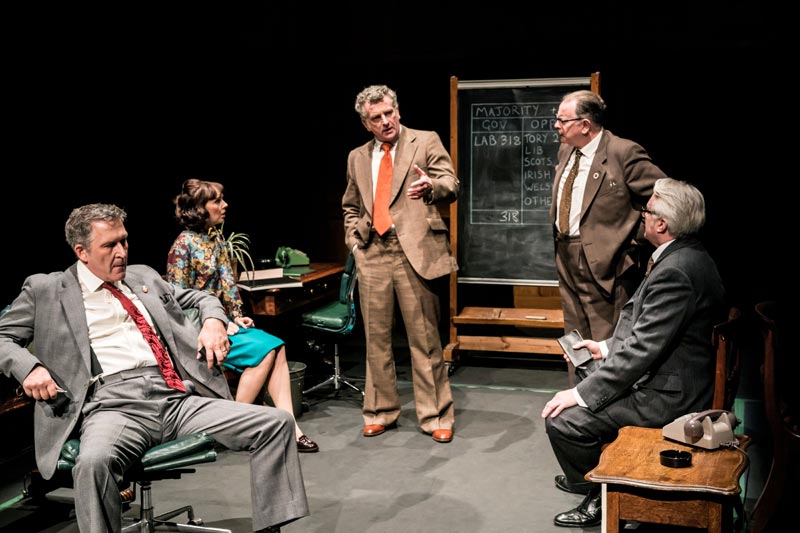 Melissa Blease reviews This House, on at Theatre Royal Bath until Saturday 24 March

Suzie Quatro and Alvin Stardust; Chopper bikes, high-waisted flares and Waterloo – for those of a certain, erm, ‘vintage’ the mid-1970s was the peak of our halcyon days. Give us a Findus Crispy Pancake followed by a bowl of Angel Delight and we’re inclined towards a Proustian moment, transported back to the lazy, hazy days of heatwaves, Ceefax and Bagpuss.

Meanwhile, in real life… 1974 was punctuated by two general elections, the winter of discontent, incessant strikes and the three-day week – and if you were led to believe it was grim up north, it was even grimmer in Westminster.

1974 must feel like a long time ago in more ways than one for playwright James Graham. Heck, Graham wasn’t even born until 1982 and, having written This House in 2012, it took four years for the play to shift from the National Theatre to the West End before eventually going on the road. But now, This House is ours in Bath, too.

Graham’s compelling drama focuses on the dramas, crises and personalities that beset the 1974-1979 Labour government as it struggled to hold on to power. By putting Labour and Tory Whips – the enforcers whose job it was to maintain party discipline and make sure their MPs voted the right way – in the spotlight rather than concentrating on better-known key players such as Harold Wilson, Jim Callaghan and, of course, Margaret Thatcher, the play shines a light on the personal motivations of the power(s) behind the Speaker’s Chair. Their conversations may be largely imaginary, but the facts are based on interviews and memoirs of the time

Adding yet more texture and context to the engaging plot, script and production (the National Theatre + Chichester Festival Theatre + Headlong = contemporary theatre triumph), a live, onstage band provides a backdrop of era-specific music (a beautifully-staged piece that highlights a pivotal moment in the drama is choreographed to Bowie’s Five Years, adding unique resonance to an already emotive glam-era ballad). While a wood-panelled set – backlit by the walkway behind the Big Ben clock face and bulwarked on each side by members of the audience – serves as both the House of Commons debating chamber and the claustrophobic Whips’ offices where tittle-tattle and hearsay prevail, plans are forged and deals are made.

While the characters, at first, feel a little bit too stereotypical to be engaging (Toffs v Oiks; Eton v Maidenhead Comp; Saville Row suits v Burton off-the-peg), it soon becomes clear this is art imitating life and not the other way around – class divisions were much starker back then than in today’s era of the ‘professional politician’.

And it most certainly can’t be said that Graham has attempted to make his audience empathise with any of the pivotal characters – although tender underbellies are subtly exposed as the drama gathers pace, we are offered an all too up-close-and-personal disclosure of the temperaments involved, and all their belligerent, self-serving aggrandisement.

Meanwhile, the sartorial non-elegance of 1970s Britain is painstakingly recreated from Bri-Nylon suits to shag, wedge and flick hairdos, and it’s fascinating to be reminded that, despite the fact that a certain grocer’s daughter from Grantham was poised to change the face of the British political climate forever, the presence of women in The House was still viewed as anomalous.

While on one level This House can be viewed as a not-that-long-ago period piece, similarities with our current turbulent political climate – from hung parliaments to referendums on Europe and devolution – are surely more than coincidental.

But then again, we’re all well aware of the age-old portent that history repeats itself – and if we are indeed about to be reminded all too sharply of the bad old days of the 1970s, this articulate, perceptive and highly entertaining production could be viewed as a timely portent.