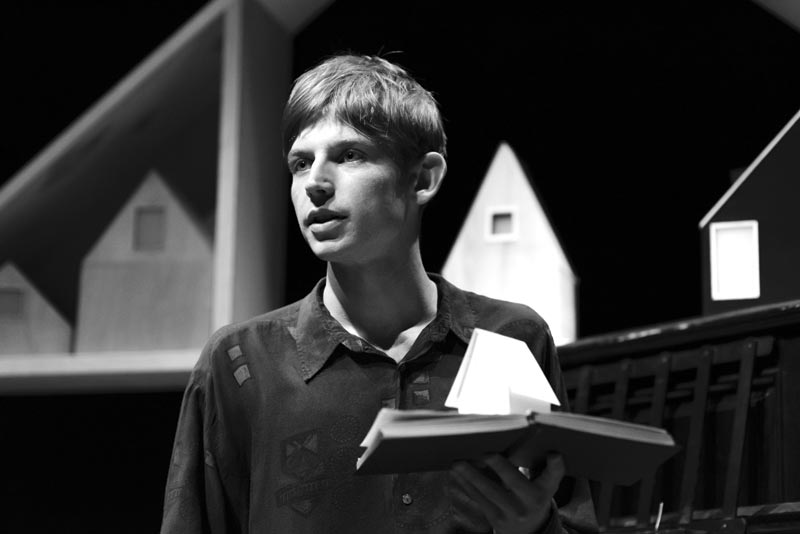 Michael Mears’ intensely moving, richly-textured one-man play This Evil Thing uses verbatim testimonies to form the script and a multi-layered soundscape for the aural backdrop against which he pays intelligent, sensitive homage to the conscientious objectors who fought their own war against war.

Guided by the real-life story of 25-year-old teacher, Methodist lay preacher and absolutist Bert Brocklesby’s struggle to maintain the right to refuse to kill, Mears led us through an evocative meet’n’greet with around 52 characters who hold various viewpoints and opinions, including army personnel of all ranks, politicians, the British philosopher Bertrand Russell, suffragist and anti-conscription campaigner Catherine Marshall, Prime Minister Henry Asquith and a whole host of ‘ordinary people’ who variously stood for conscription, against conscription, or somewhere in the middle of an emotional no-man’s land with regard to their attitude towards the 16,000+ individuals who attempted to claim the right to refuse to perform military service on grounds of freedom of thought, conscience or religion.

The CO’s story is still a tale rarely told, and rarely presented with this level of wisdom, perception, compassion and balance… but Mears does it admirably. One man, one act, few props; many scenes, multiple roles, numerous voices: This Evil Thing represents the great tradition of storytelling at its very best, and offers an up-close-and-personal insight into the human condition, for better or worse. It’s a revelatory tale indeed, sadly as relevant today as it was when Brocklesby fought his own war.

On Friday and Saturday evening, the nationally-acclaimed, Bath-born performance poet Toby Thompson presented his extended performance poem A Day to Remember. Originally commissioned by director Jesse Jones for Northampton’s Royal & Derngate Theatre in 2015, the poem commemorates the 1915 Battle of Aubers Ridge. First performed in Northampton on Remembrance Sunday on the 100th anniversary of the battle three years ago, a full UK tour of the performance throughout 2018 formed a part of the WW1 centenary commemorations.

Of the 11,000 British troops who died at Aubers Ridge, the Northamptonshire Regiment in particular suffered overwhelming and disproportionate losses, suffering 984 casualties on a single day that arguably remains to be the darkest in the county’s history – but at the Ustinov last week, Thompson filled the hearts of his audiences with deeply penetrating light.

Opening with a thoroughly uplifting blast of Love (another Thompson work of genius) before slowly, softly, skilfully taking us on a journey around, into and through the lives of the people involved in – and affected by – the battle, Thompson weaved pure, ethereal, imperturbably visceral magic. The pain was palpable, the sense of despair tangible, the delivery throughout graciously benevolent and accessible, offering unrestricted access into the hearts and minds of both Thompson and the characters who carried his story along.

Poignant but somehow uplifting, passionate yet pragmatic, raising many questions but always, always remaining wholly respectful of the theme, we were left pondering the futility of war and feeling the pain of a generation whose losses we still mourn so deeply today as the familiar, fluctuating dynamics of Elgar’s Nimrod filled the tiny theatre, rising and falling in perfect timekeeping with the emotion that filled our hearts.

Lest we forget, exquisitely remembered.

Main image: Poet Toby Thompson performed A Day To Remember at the Ustinov Studio in Bath