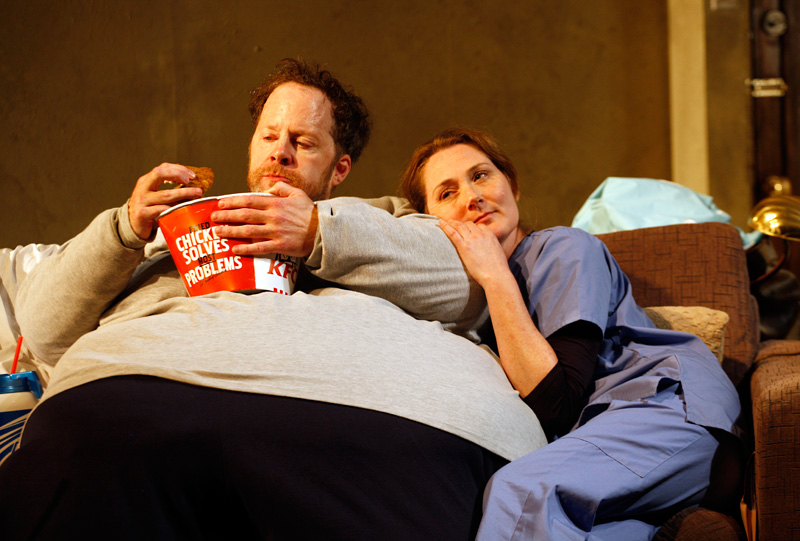 Melissa Blease reviews the UK premiere of The Whale, on at Ustinov Studio, Bath until 2 June

The Elephant Man, Edward Scissorhands, the Hunchback of Notre Dame – if you want to make speedy “what’s this play a bit like?” comparisons to describe The Whale, it’s easy to come up with several obvious titles with which to contrast and compare.

So, are we on sitcom territory here? Far, far from it. There’s neither a domineering mother nor an easygoing, affable dad at the head of this dysfunctional family psychodrama. Instead, Charlie – the larger-than-life character with whom we get to be disconcertingly up-close-and-personal – is a deeply troubled, pathologically depressed, reclusive 600lb gay man, marooned on a sofa in his home in Idaho, mourning the death of his partner, and crippled by his addiction to junk food. Pretty much his only human interaction is with his nurse/best friend Liz and, via his laptop, the students he teaches online, who can hear him but can’t see him – until, that is, a Mormon missionary who says his name is Elder Thomas, his daughter, and his ex-wife appear on the scene…

While American playwright Samuel D Hunter’s captivating drama, directed by the Ustinov Studio’s artistic director Laurence Boswell and designed by Tim Shortall, could not be described as an easy watch, Charlie is one of the most compelling creations to grace a stage in decades. Shuler Hensley (who originated the role when The Whale opened off-Broadway in 2012) is so deeply, intensely committed to his character that he almost doesn’t need the remarkably lifelike fat suit that he wears throughout this harrowing, two-hour journey in order to remind us where Charlie is at with his weight. The constant sweating and wheezing, and his agonising attempts at movement are more effective than a costume can ever be.

The Whale is not, however, a comment on the obesity crisis, nor (despite the visiting Mormon) a potshot at the role of the church within contemporary American society, nor (despite its location setting) any kind of State of the Union address. Ultimately, it’s a play about the human condition… regardless of what physical or psychological condition the humans involved may be in.

Rosie Sheehy as Charlie’s estranged (and strange) daughter Ellie is a consummate caricature of the kind of teenager we never want to have to deal with but most of us have met: scowling, deadpan, detached, vicious and vile.

Charlie’s loyal best friend/sister of his dead boyfriend Liz (Ruth Gemmell) is far more likeable, though equally complex: a professional nurse who urges Charlie to seek urgent medical care while feeding him buckets of fried chicken and foot-long meatball subs, she inadvertently (or deliberately, you decide) maintains both Charlie’s and her own psychological torment.

Oscar Batterham brings the requisite veneer of breezy enthusiasm to his role as conflicted Mormon missionary Elder Thomas, while Teresa Banham skilfully blends resentment, resignation and tenderness as Charlie’s ex-wife Mary, although somehow, both characters feel peripheral. While the supporting cast pads out (pardon the pun) Charlie’s backstory and bring his situation to hyperreal life, Hensley’s performance is so potent, his character so authentic, his pain so palpable, that The Whale would work equally well as a one-man show – which in effect, it is.

Laden with metaphors, rich in observation and utterly engaging; sensitive but robust, cruel but humane, delicate but graphic: at times, you’ll almost feel driven to watch The Whale through your fingers. But resist the urge, for despite all the superficial unpleasantness unfolding on stage, The Whale is a powerful and ultimately beautiful work.