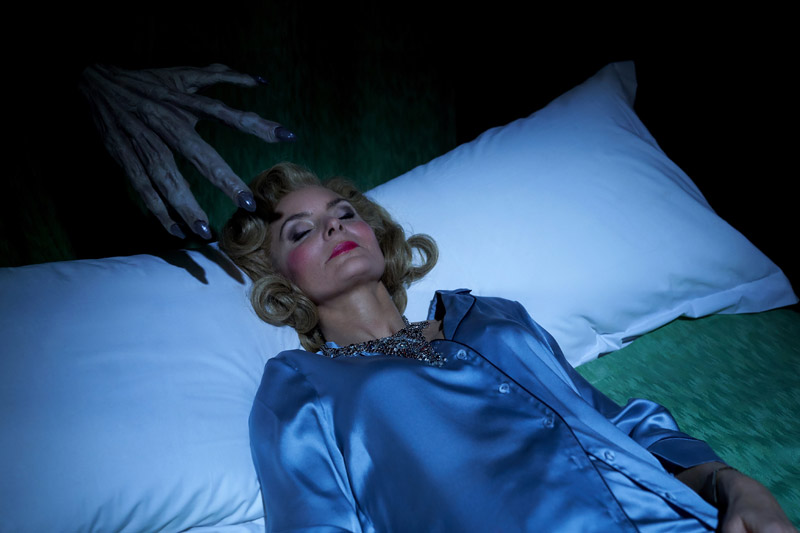 Review: The Cat and the Canary at Theatre Royal Bath

Take one rambling, crumbling, remote mansion. Gather together a subtly seductive siren, a couple of wise guys and a handful of British eccentrics, each of whom may or may not be the heir to their distant relative’s estate. Add an eccentric housekeeper, set the clock to midnight and whip up a storm that rattles the mansion’s windows while you dream up an utterly improbable, over-contrived plot usually at least one character who’s trying to prove that another character is insane, at least one thief, and at least one potential (or actual) murderer. Bake for 97 years, and Bill Kenwright’s Classic Thriller Theatre Company’s new adaptation of John Willard’s murder-mystery The Cat and the Canary (which originally premiered in 1922 and has inspired four film versions to date) is ready for it’s Big Reveal.

Unfortunately, leading lady Britt Ekland was forced to retire from the performance we attended due to illness. Understudy Bryony Rawle, however, did an admirable job in the role of skilfully sinister housekeeper Mrs Pleasant, who does or doesn’t live up to her name depending on your views on folk who are more influenced by spooky goings on in the afterlife than the actual events taking place in this one.

As Annabelle West, Tracy Shaw gives good glam, anchored down by skittish smatterings of hysteria at key points. Marti Webb’s Susan Sillsby gets the wittiest lines and makes the very most of them, while Nikki Patel as Susan’s sidekick Cicily Sillsby nudges the plot along nicely when Harry Blithe, Paul Jones, Charlie Wilder, Roger Crosby and Hendricks (Gary Webster, Mark Jordon, Ben Nealon, Eric Carte and Martin Carroll respectively) eventually seamlessly merge into one big conglomeration of Roaring Twenties-era British men of various ages who all turn from genial and considerate to gloomy and callous (and back again) on the turn of a sixpence.

As the programme notes for the original stage production requested, “If you like this play, please tell your friends; but pray don’t tell them how it ends.” If you can work whodunnit, don’t hesitate to let me know.