Let’s go back to 1480. It was nearing the end of the Plantagenet period. Edward IV was on the throne. Ferdinand II of Aragon and Isabella I of Castile had initiated the Spanish Inquisition. And The Angel Inn was built in Lacock. The ‘angel’ was an English gold coin introduced by Edward IV – so iconic that many pubs were named after it.

Later rebranded as Sign of the Angel, this ancient inn does, literally, transport you back in time. The timber-framed exterior, the leaded oriel windows, the wonky beams, the moulded stone fireplaces and the stone floors have seen five centuries of use.

Since 2014, Sign of the Angel has been run by two entrepreneurial brothers, Jack and Tom Nicholas (who also run another local business, the Whitley Golf Club), in collaboration with chef Jon Furby who oversees the kitchen and the day-to-day operations. When the brothers first arrived, the inn was looking run down after a long winter when it had been left empty and cold, so they refurbished the building, stripping back and decorating simply and subtly around the sturdy ancient features. 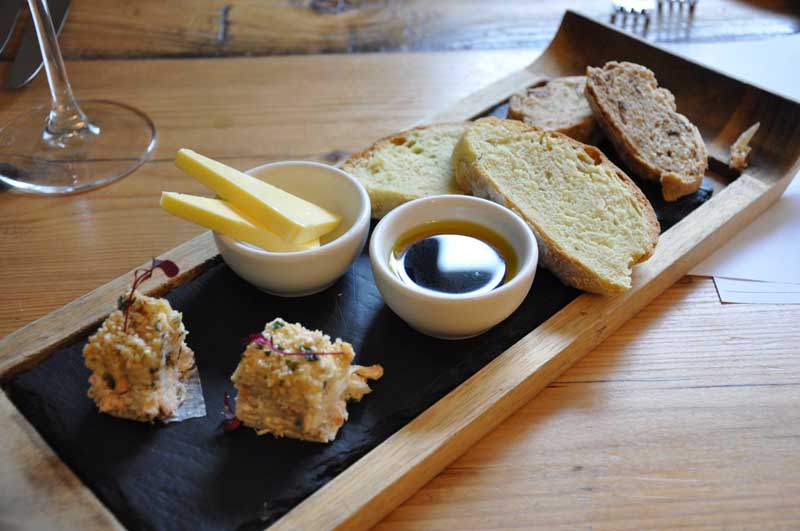 The food, too, had a makeover. Defined as modern rustic, it’s fresh, seasonal and assiduously sourced from the west country. The restaurant vibe is casual dining – although dining in front of the substantial moulded stone fireplace is infused with the slight anxiety that Arya Stark might arrive at any moment with the family sword or a masked disguise. But that’s all part of the powerful period backdrop.

The lunch menu looks honest and down-to-earth – including sea salted fish and chips, Cheddar cheese ploughman’s or ‘Angel’ pie with creamed potato, seasonal vegetables and gravy. There are vegetarian and gluten-free options, too, and an evening tasting menu, for £40 for seven courses with £18 for drinks pairing. There are also monthly events where the tasting menu is based around three items – July, for example, features rabbit, bass and apricot.

Having taken our order, waitress Erin came back with a selection of home-baked, hard-to-resist character breads – curry and coriander; raisin; and smoked salmon and sesame seed. Having eaten way too much of all three, my starter was lobster arancini – creamy risotto rice balls, breaded, fried and stuffed with lobster meat, avocado, cucumber and mango. Edward IV, or one of his Lacock nobles, might not have encountered arancini, certainly not with avocado or mango, but that wasn’t the point, as the avocado ooze and the fresh tang of mango were sublime. Rob – aka Drogo – went for a more traditional meat option, duck liver parfait with watercress, plum, crackling and whisky. 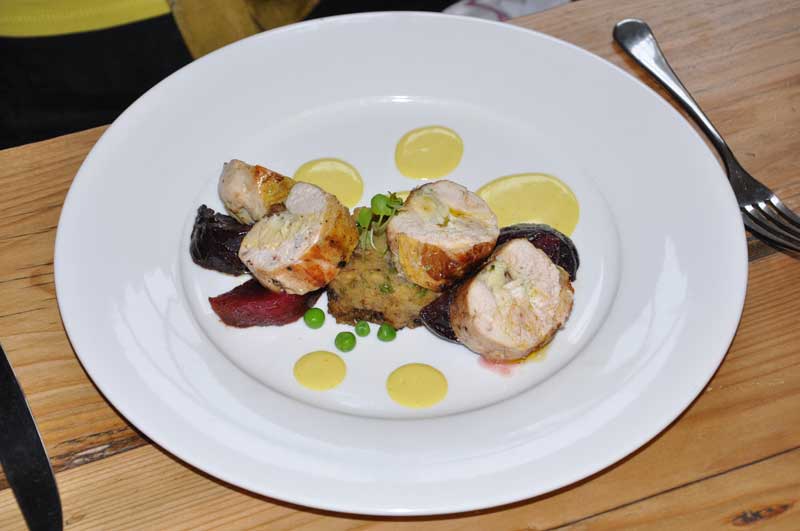 I transferred from the food of the sea and the fruit of the hedges to the food of the air – with guinea fowl and pea bubble squeak cake with beetroot, raisin, orange and mustard dressing. It was simple and stylish, with circular daubs of pale mustard dressing creating a decorative surround, the thick slices of poultry melting softly into the bubble squeak cake. Drogo – who rarely has truck with a light main – chose the lamb rump served with minted potato, broad beans, celeriac and mint sauce. It was a juicy, textured spectacle, succulent lamb piled on glistening minted potato with cubes of celeriac absorbing the jus.

Eschewing my favourite brûlée option for dessert – and it did sound wonderful, vanilla brûlée with pecan and shortbread – I enjoyed gin and lime parfait with meringue, jelly and cucumber. Served on a matt black plate, the mini white meringue cakes and the bleach of the parfait creached a suffusion of brightness, only dimmed by its consumption. Drogo – normally a crumble man – unexpectedly chose the west country cheese platter. With an exotic selection of crackers, a walnut concoction and yellow cherries balancing elegantly on the cheese, this was cheese and biscuits with attitude.

Go then to this ancient inn ­– find your character, take off your sword, warm yourself by the fire and tuck in.