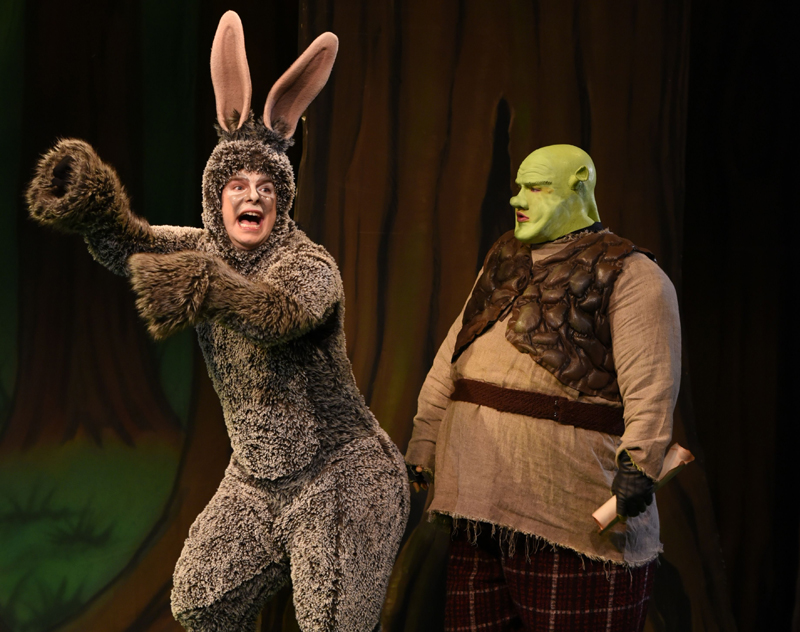 Shrek lives alone in a swamp and that’s how he likes it – he is an ogre after all. So when influxes of fairytale creatures are forced onto his land, he makes it his mission to get his swamp back. With a tiny tyrant Lord Farquaad, a non-stop talking donkey, and a princess that has a mind of her own, Shrek’s quest soon becomes a little bit more complicated than anticipated.

Four animated films spanning nine years and a 1990 book from William Steig, it is safe to say that the story of Shrek is incredibly well known worldwide. And with only 19 societies nationwide granted a license to perform the stage adaption of the story in full musical form in 2019, amateur company Bath Light Operatic Group returns to the Theatre Royal Bath stage with its latest production. Nothing about this performance is amateur however – with an incredible set of castles, woodlands and fiery dragon pits, and hilarious and vibrant costumes, it truly is enchanting.

George Miles embodies Shrek with style, from his ogre roars, quick-witted punch lines, to the soft and melodic confessions of friendship, love and heartbreak. His opening number showed the sorrow from his traumatic childhood, quickly transitioning into an upbeat tempo filled with joy and happiness.

Perfectly playing off of the sarcastic ogre, Lizzie Andrews plays a strong willed and sassy Princess Fiona. With an incredible tap sequence accompanied by the rat pack, the personal highlight had to be the performance from young Fiona, teen Fiona and adult Fiona in their quest of waiting for their prince to come, all coming together for a transfixing crescendo.

Geoff White commands the stage as the vertically challenged Lord Farquaad. With exciting and hilarious musical numbers that aren’t afraid to overexaggerate the issue around his height, this makes us wish that we all had the chance to wander around the streets of Duloc.

But overall, Ryan Hughes as the fast-talking, charismatic and shameless Donkey, alongside Grace Baxter as the soulful and fiery Dragon, steal the show. Bouncing off each other and with perfectly timed witty gags, this makes their relationship with each other and the audience a wonderful spectacle. With Donkey originally voiced by the talented Eddie Murphy, Hughes successfully makes the character his own, with no need for imitation.

Full of adult humour, topical references and mesmerising performances, the cast and ensemble of Bath Light Operatic Group sure do know how to put on a grand show.