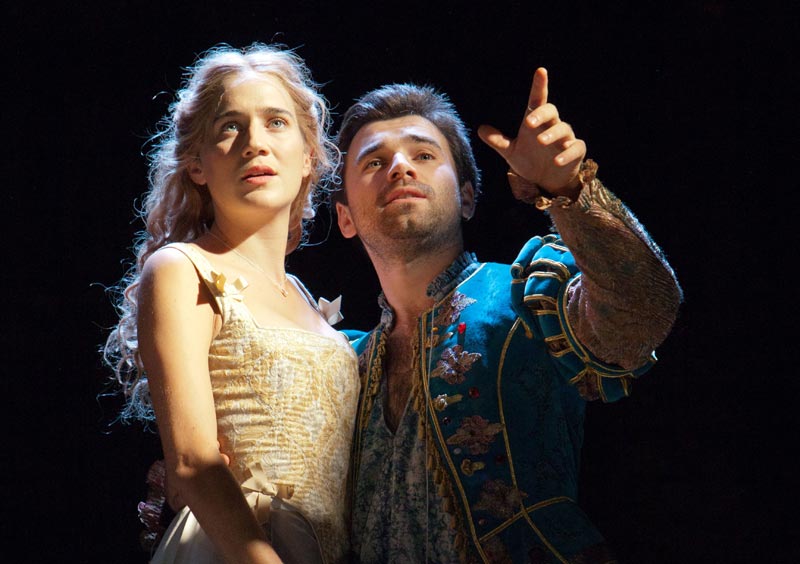 Melissa Blease reviews the stage adaption of Shakespeare in Love, on at Theatre Royal Bath until 13 October

Shall I compare this delectable romp to a Shakespeare play? It’s definitely equally lovely and, during quieter moments, temperate enough to allow me to use such a trite calembour in my opening gambit. And indeed, it is a Shakespeare play… in a delightfully quirky way, at least.

Aged circa mid-20s, dynamic new writer William Shakespeare is struggling to meet the impending deadline for his new comedy Romeo and Ethel, the Pirate’s Daughter and is desperately seeking inspiration for the first line of his 18th sonnet. But inspiration comes along not as a result of his best mate Christopher (‘Kit’) Marlowe’s suggestions, nor because of the pressure that money men/theatrical impresarios with massive egos are putting on him.

It is, eventually, love that saves the tortured writer’s day – albeit in the totes inappropes form of Viola de Lesseps, an aristo-heiress who makes their coupling even more untenable due to the fact that, by the time Cupid’s arrow hits the target, Viola has already broken the laws of the day by enrolling herself in Shakespeare’s theatre company dressed as a boy, has taken the part of Romeo… and is pretty much destined to marry the dastardly Lord Wessex.

If the plot sounds familiar, that’s because the 1998 film of the same title was a massive hit. But this new production of Lee Hall’s adaptation of the screen version, co-written by Tom Stoppard, captures much, much more of the subtlety, wit and dynamism of a narrative that could easily be dismissed as mere RomCom rhetoric but is, at its heart, an impeccably-wrought love letter to theatre itself.

Directed by Phillip Breen and designed by Max Jones, all the action is set against a backdrop of a revolving section of an Elizabethan-era theatre, complete with mezzanine galleries (spoiler alert: yes, there are several balcony scenes). Many of the personalities we meet including Christopher Marlowe, Ned Alleyn, John Webster, Lord Chamberlain and Queen Elizabeth were, of course, real-life characters – which makes the drama even more fascinating.

But the multiple in-jokes about commercial writing, theatrical productions, actors’ egos and the influence of audience/critical reception – always delivered with brevity and a deliciously devilish lightness of touch – coupled with ‘behind the scenes’ snapshots of the ways of the days (of yore) are what keeps the twisty/turny pace up at all times; blink, and you’re in serious danger of missing a very good plot-device trick.

In the role of Shakespeare, Pierro Niel-Mee is a consummately accomplished heartthrob; even when we realise what a cheat he is (he proposes to Viola before he cares to mention the missus and kids who are patiently waiting for him at home in Stratford), his innate charm still keeps us on side…

But Edmund Kingsley as Marlow just about steals the limelight from our hero. If it’s true that Marlow actually provided Shakespeare with all his best lines, ‘proof’ is presented here most cleverly in a scene where Will – searching for the right words in his initial attempts to woo Viola – relies on Kit prompting him from the shadows, in a scenario reminiscent of that scene in 1987 big screen RomCom Roxanne (itself based on Edmond Rostand’s 19th century French play Cyrano de Bergerac  – ah, films within plays within films within plays, eh?).

But the success of this production (and it is indeed a rollickin’ success) relies heavily on ensemble achievement, and not a single member of the production’s tightly-knit band of multi-tasking players doesn’t deserve commendation.

So… we all know that Shakespeare never wrote a play called Romeo and Ethel, the Pirate’s Daughter. We all know that he went on to write a further 136 sonnets following the one that inspired my own at the very start of this review. And we all know that, somewhere within the real-life scenes that created the Bard’s own personal, real-life dramas, he must have fallen in love.

But was pigs foot marinated in juniper berry vinegar served on a buckwheat pancake really on the specials board in one of the taverns of the day? Was there ever a Viola who became Shakespeare’s Juliet? Did Kit Marlowe visit Shakespeare from beyond the grave to help him turn sketchy inspirations into works of art? Ah, it matters not; this is not a history lesson – this, dear audience, is theatre.

As Shakespeare himself once wrote, “one man in his time plays many parts” – and in many ways, Shakespeare in Love has given him his best.

Main image: Pierro Niel-Mee as Will Shakespeare and Imogen Daines as Viola de Lesseps in Shakespeare in Love. Credit: Pete Le May