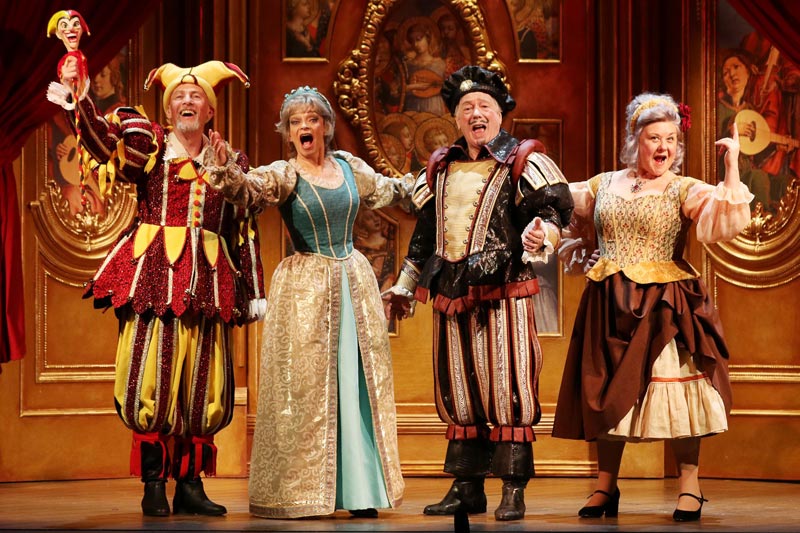 Written by Ronald Harwood, first performed in 1999 and turned into a film a decade or so later (Dustin Hoffman’s directorial debut, starring a cast of British theatrical royalty including Maggie Smith and Tom Courtenay) Quartet could be likened to a British version of the smash-hit US sitcom  Friends, but set in an upmarket care home instead of an upscale New York apartment and replacing aspirational 20/30-somethings with characterful, arty octogenarians.

If we are to run with that analogy, then gentle, ditzy Cecily (‘Sissy‘) is a sorta Phoebe; reserved, discerning Reginald a kinda Ross; saucy former lothario Wilfred a more mature Joey and conceited diva Jean slightly Monica-esque in her ability to establish herself as the alpha female – and the episode we’re enjoying here would be The One Where They’ve All Retired.

‘The All’ in this instance are former opera singers living in a retirement home for former professional musicians. At the start of the play we’re introduced to a cosy little established trio of ‘inmates’: Sissy, Reg and Wilfred, who are apparently making their most of their rather elegant dotage, passing their time reminiscing, gently teasing each other and – in Reg’s case, at least – aspiring to one day be given marmalade at breakfast time, while Sissy attempts to whip up enthusiasm about the home’s impending concert to celebrate Verdi’s birthday.

But the tuneful trio’s harmonious chorus is suddenly interrupted by a sonorous syncopation in the form of new resident and former diva Jean, whom all three friends worked with in the past… and to whom Reg was once married. When the dust of their reunion has settled, Sissy, Reg and Wilfred set to work persuading a reluctant Jean to join them in performing the Bella figlia dell’amore quartet from Verdi’s Rigoletto for the birthday concert, a highly ambitious undertaking that’s made especially challenging by the fact that none of the four has sung a note for years…

Despite the sitcom-territory setup, Quartet cleverly avoids taking an over-familiar route to a drama that largely revolves around issues related to ageing – even when the script occasionally succumbs to lackadaisical stereotyping, our characters are much more likely to be looking to As Time Goes By/Waiting for God rather than the sluggish One Foot in the Grave or the utterly wretched Vicious for inspiration, resulting in an intelligently discerning, thoroughly engaging snapshot of their lives.

Wendi Peters is a dynamic tour de force as the eternally optimistic Cecily/Sissy, the big-hearted former good time girl now unwittingly relying on her friends to support her through what may well be the onset of dementia. Paul Nicholas as Wilfred brings a lighthearted blast of audacious silliness to proceedings, creating a beautifully-balanced double act bond with the more reserved Reg (Jeff Rawle,) and Sue Holderness brings presence, poise and pathos to Jean, who still desperately clings to her Prima Donna status despite the fact that her heyday has long since receded.

This tightly-knit ensemble cast bring a gently-paced drama to its uplifting, subtly moving denouement with wit, charm and elegance, keeping attention levels up with satyrical quips or poignant, revealing declamations at times when you least expect them… or a pantomime-style punchline just when you need it.

Quartet is play for all ages that examines what ageing means to all in a penetrating, inventive but comfortably familiar framework. It’s clear that none of the friends we make along the way here intend to go gently into Dylan Thomas’ notion of that good night at the end of a life well lived (or otherwise) and this harmonious rhapsody carries with it a leitmotif that lingers in the consciousness long after the curtain falls.