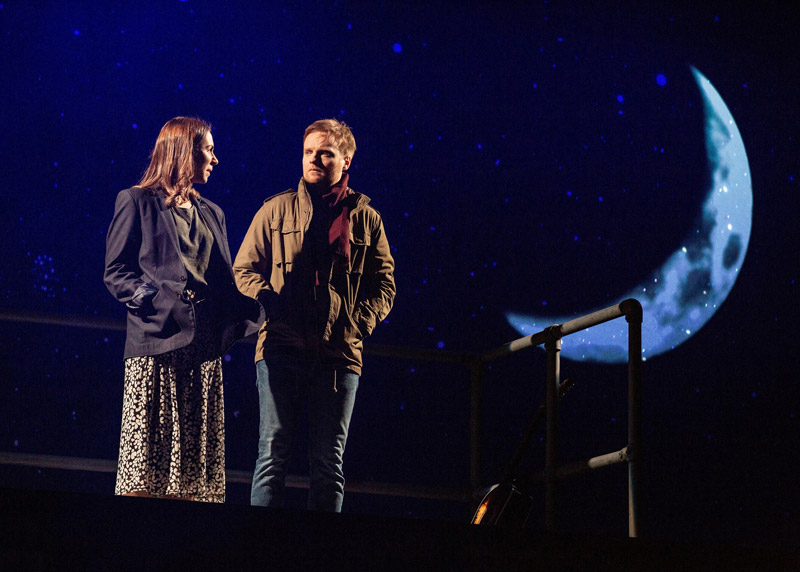 Review: ONCE at Theatre Royal Bath

Originally a low-budget, Irish independent film written and directed by John Carney, Once was one of the more modest premieres of the 2007 film season. But the story of a Dublin street busker and a Czech musician whose passion for music sparks a short-lived love story received widespread critical acclaim, enjoyed massive box office success and went on to win a clutch of prestigious awards. In 2012, Once was adapted for the stage, and opened on Broadway. Having since toured the world (and enjoyed a successful West End run), it’s now one of the most celebrated new musicals of the century… and it’s easy to see why.

Our leading man – simply known as Guy – works in his dad’s vacuum cleaner repair shop and busks on the streets of Dublin. But when Guy meets leading lady Girl – a Czech woman with a young daughter, a similar passion for music, and a broken Hoover – his fortunes take a distinct upturn. This is not, however, a conventional, boy-meets-girl affair – but neither is Once a conventional set up/conflict/resolution drama.

For a start, it’s an intimate experience rather than a razzle dazzle spectacular: the seductively atmospheric set is simply furnished with an eclectic collection of mismatched bar/household furniture that acts as a backdrop to several low-key scene changes (a pub bar; two shops; Guy’s bedroom; Girl’s home; a seawall by night), leaving clever lighting to set the various moods. Those moods, meanwhile, are dictated by the all-important, pretty much non-stop music.

Even before we get into Guy and Girl’s story, we’re at what appears to be an impromptu Irish session in a lively Irish pub rather than taking to our seats in a very traditional theatre: guitars, accordions, penny whistles, a cello, several violins and a cajon, all used to magnificent effect, are all present in perfect harmony… and the musicians are all actors, and all the actors are musicians, and the resulting craic is very, very great indeed. But as the band plays on and the connection between Guy and Girl deepens, the passion-fuelled choruses start to give way to subtle disharmonies, taking us to the bridge forged between emotional cliffhangers, quirky plot twists and spirited emotional exchanges.

As Girl, Emma Lucia is at once charming, shrewd and eccentric. Whether or not Daniel Healy, as Guy, deliberately allows her to take the spotlight when both characters should be sharing it isn’t entirely clear, but matters little; the chemistry is tangible from the get-go. The supporting cast, meanwhile, epitomise the meaning of ensemble at its very, very slickest; selecting just one or two individuals for stand-alone acclaim would be nigh on impossible. And anyway, in many ways, the songs are the real stars of the show: a medley of Irish-inflected anthems and ballads written by Glen Hansard and Markéta Irglová (the original stars of the film).

Okay, tiny whispers of over-sentimentality occasionally take us too far away from contemporary Brief Encounter territory and too close to those over-exaggerated sincerity scenes from The Commitments; the apparently brittle bank manager who ends up not only funding a recording session but turns up at the studio to contribute guitar riffs too? Don’t be silly. But Enda Walsh’s fast-paced, wit-laden script and a smattering of well-judged ‘distractions’ (the moments when exchanges between Girl’s family and friends, spoken in English, are translated into Czech via a backdrop projection, for example) more than compensate for such niggles.

Heartwarming and heartbreaking, self assured and extremely satisfying: you might well want to see Once more than once.