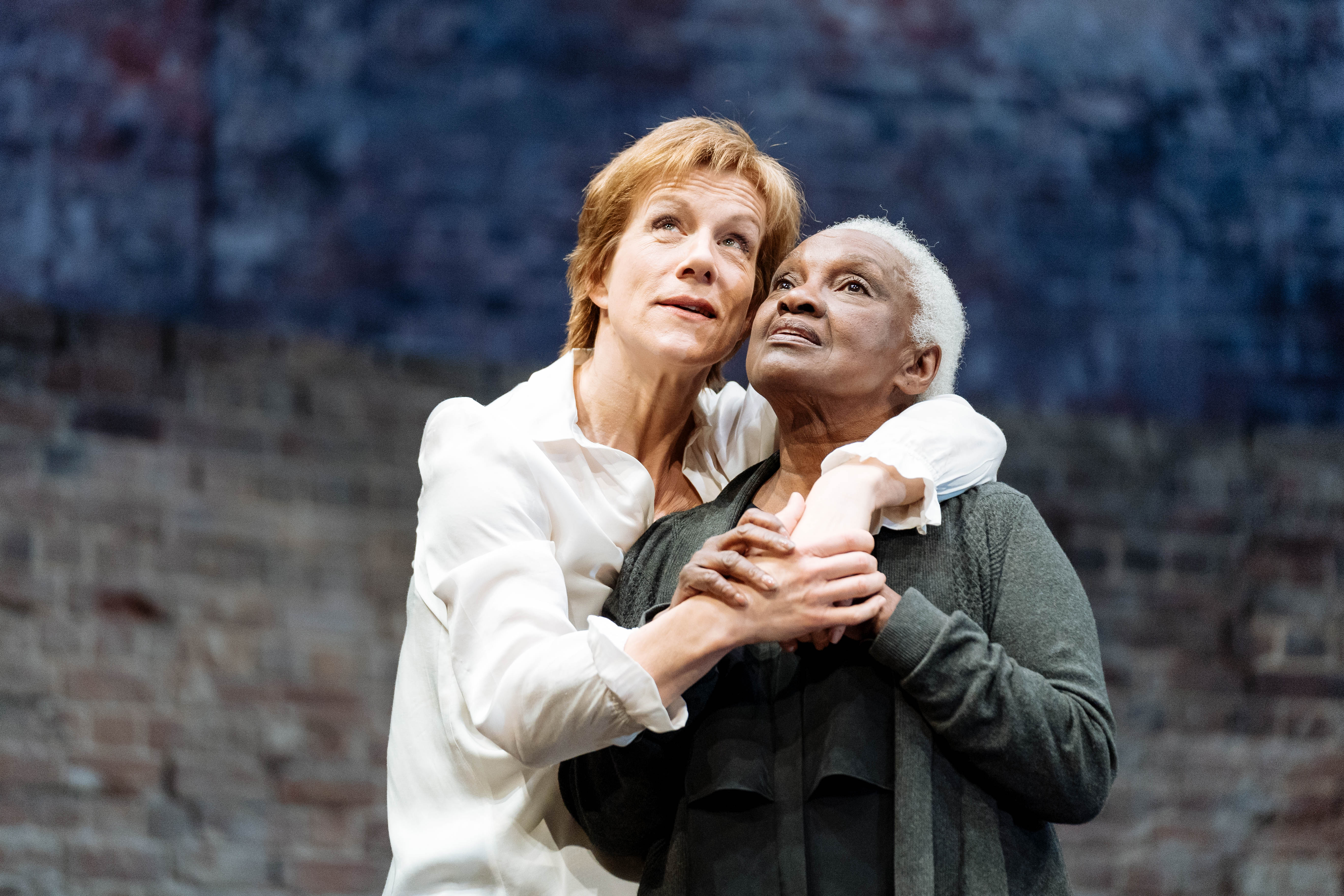 Friedrich Schiller’s Mary Stuart, first performed in 1800, focuses on some of the most signifiacnt moments in 16th century political history. The dating of this play might make you think this production would be irrelevant, but this certainly isn’t the case with director Robert Icke’s interpretation.

It’s sharp as a tack with the two queens – Elizabeth I and Mary, Queen of Scots – battling to the death, advised and betrayed by their smart suited and often duplicitous courtiers.

Simply set on a revolve in front of looming brick walls almost reminds one of a Western film where the protagonists circle and snipe, trying to find the other’s weaknesses before moving in for the kill.

In simple modern dress, a coin is spun at the start to determine which actress, the iconic Juliet Stevenson or equally impressive Lia Williams, takes the part of Mary Stuart or Elizabeth I. The coin toss is shown close up on screens either side of the stage, so there can’t be any fixing of the result. Within seconds Stevenson and Williams’ parts are determined and the play dramatically begins.

Stevenson played Elizabeth in the performance I witnessed, but that just made me wish to see it again with the roles reversed.

Catholic Mary Stuart is imprisoned ostensibly for murdering her husband, Darnley, but is actually locked up due to her strong claim to the throne of England, held by Protestant Elizabeth I.

“I hold the crown,” says Elizabeth, “but she holds all the cards,” as she hesitates to sign the execution warrant for fear of making a martyr of Mary. The public may be baying for blood now but their loyalty could turn following Mary’s death.

“To serve the people is to be a slave to the people. I hate them,” Elizabeth rants while trying to make up her mind. Thus she holds the power but Catholic Mary, with support from France, has the sympathy.

Elliot Levy as Lord Burleigh plays the straight adviser, while Rudi Dharmalingham as Mortimer and John Light (Leicester) scheme effectively. Elizabeth, seemingly weak at times, comes to raging life on occasions, aware of the forces she’s facing. “There is no lock that Catholic treachery won’t unpick,” she rants, getting most of the best lines in this play. Machiavelli would have been proud of the plotting as the gaggle of courtiers scheme for their chosen queen.

It’s a rare treat to see Juliet Stevenson on stage in Bath but don’t imagine she’s the dominant figure here. Lia Williams matches her well as this pair of almost androgynous females switch from vulnerable to powerful in the blink of an eye. There’s a large cast too, all pitch perfect and somberly clad as if on the current front benches at Westminster.

If you’re interested in serious theatre at its best, then this is not to be missed.