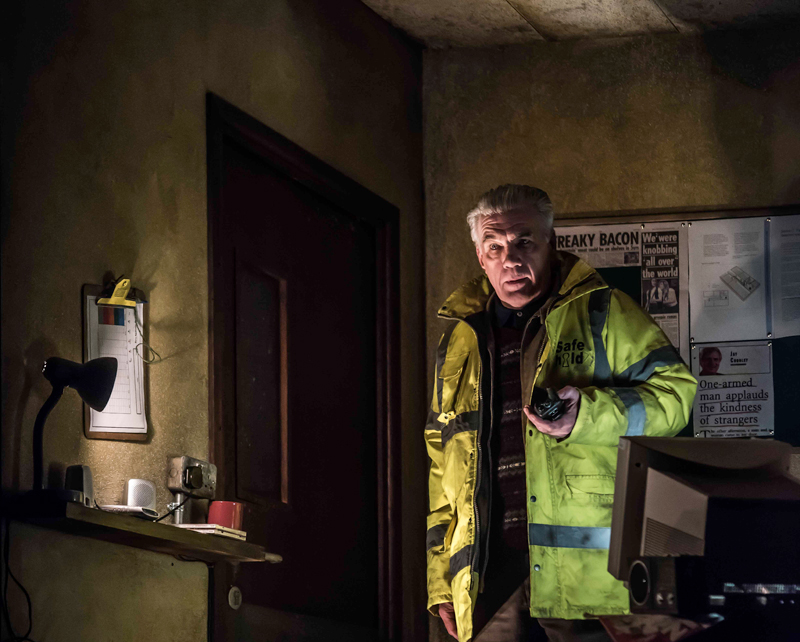 WARNING (on the Theatre Royal Bath home page): Please be advised that Ghost Stories contains moments of extreme shock and tension. The show is unsuitable for anyone under the age of 15. We strongly advise those of a nervous disposition to think very seriously before attending.

REACTANCE (according to the OED): An emotional reaction in direct contradiction to rules or regulations that threaten or eliminate specific behavioural freedoms.

RESULT: tickets for this super-smart revival of Jeremy Dyson and Andy Nyman’s 2010 supernatural theatrical fright fest, embarking on a national tour and premiering in Bath direct from a West End run – are selling faster than Parapsychology Professor Phillip Goodman can say “we have to be very careful what we choose to believe”.

Professor Goodman has recorded interviews with three people who claim to have had a supernatural experience… and he’s poised to share those stories with audiences across the UK: cue curtain up on one of the most chillingly atmospheric live theatre experiences that fear fans could wish for.

If there’s a word for reacting against reactance, feel free to apply it at this juncture, because Messrs Dyson and Nyman have very politely asked me not to reveal the details of the three stories, and I’m going to adhere to their request because if I don’t, I might end up as the inspiration for a key character in their next cabalistic metadrama (the one about the fate of the theatre critic who didn’t do what the play’s writers asked them to do?). And anyway, in many ways Ghost Stories is not about the actual stories involved; it’s all about us, and what we choose to believe, and what we refuse to believe. What I’m definitely free to say is this: prepare to be unsettled from the get-go… and keep your coat on.

Artfully lit sets mess with your mind and your sense of perspective, both physical and emotional. Long, heavy silences and total blackouts of the kind rarely experienced in the theatre punctuate an otherwise fast-paced script; jump cuts and harrowing scenes illuminated by the dazzle of almost painfully bright spotlights deliver maximum impact at crucial moments. Keeping my fingers crossed that the next few lines won’t break my vow of silence concerning the plots, you feel as though you’re with that lonely night watchman in a big, empty warehouse in the wee small hours of the morning; you can taste the bitterness of the fog that shrouds a broken-down car in the forest at night; you can sense the confusion and fear felt by the businessman father-to-be… and you can actually smell the bleach that the cleaner’s using to mop a hospital ward.

As a result of all this Derren Brown-esque manipulation, audience energy levels vibrate with the kind of tension, dread and anticipation that turns even a random rustle of a sweet wrapper into a suspicious portent of impending terror, while the subtlest movement in the stalls alerts you to movements in the shadows, either real or imagined; there are moments of laughter too, but it’s very much of the nervous variety.

I haven’t mentioned the names of any of the actors. Maybe they’re not actors. Maybe this isn’t a play at all. Maybe we have to be very careful what we choose to believe.