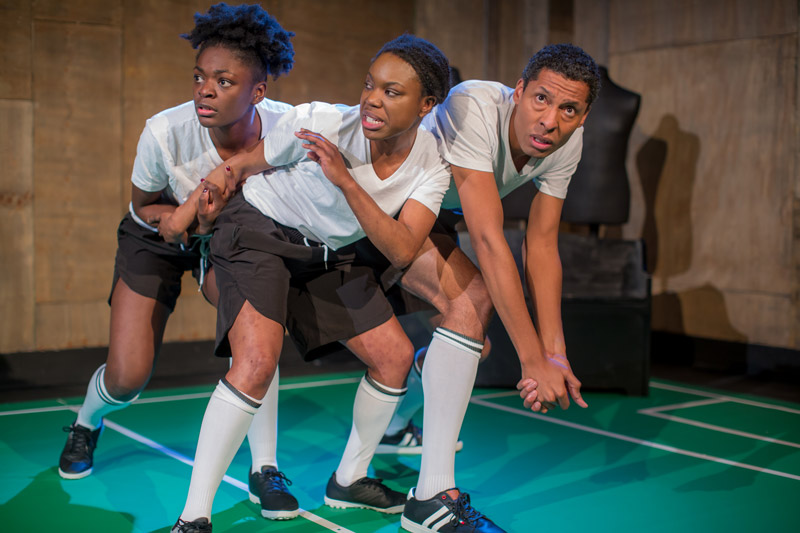 Review: Getting The Third Degree at The Rondo Theatre

Young, gifted and black… and targeted in National Front hate campaigns, harangued by racist taunts and set upon by three vicious thugs for “the offence of dating a white woman,” amongst countless similar acts of aggression, both physical and verbal: he may have been an unassailably talented, massively successful footballer (and an undisputed style icon) but for Laurie Cunningham, Britain in the late 1970s was a distinctly inhospitable place to be.

And yet, the backstory of the man that Bath-based writer Dougie Blaxland’s latest RoughHouse and Live Wire theatre co-production Getting The Third Degree – commissioned by English football’s equality and inclusion organisation Kick It Out to mark the campaign’s 25th anniversary and coincide with Black History Month – focuses on is about as far from being a tale of victimisation in the hands of vile, ignorant bullies as you can get.

This wholly uplifting, triumphant celebration of Cunningham’s life offers an eloquent insight into both his personality and the influences – for better or worse – that turned him into the success story he became: the son of Windrush Generation parents, born in London in 1956, became the first ever millionaire black footballer, the first black player to sign for the mighty Real Madrid, and only the second to win a cap for England.

The theatrical retelling of Cunningham’s autobiography is delivered by a perfectly-paced, impressively assured mini-ensemble cast of just three actors: Emile Clarke, Sabrina Laurison and Zara Gabbidon share the role of Cunningham and a host of other characters involved along the way, resulting in an impressive feat of wordplay keepy-uppy. It’s an all-singing, all-dancing production, too – Cunningham was as proficient on the dance floor as he was on the football pitch (he used to enter dance competitions in nightclubs in his downtime, often making him late for team practice the following day), and the time-specific soul, funk and disco hits of the day keep on coming, bringing glamour and sparkle to erstwhile dark, sinister moments and cleverly adding further multi-faceted contrast to the ugly, misinformed, grotesque precepts that inflame and ignite bigotry.

While the themes raised in Getting The Third Degree are, sadly, as vitally relevant today as they were when Cunningham and his West Bromwich Albion team mates Cyrille Regis and Brendon Batson (dubbed The Three Degrees – a term they despised – by their manager Ron Atkinson) were kicking around in the late 1970s, the celebratory aspect of the play comes from the fact that Cunningham inspired a generation of young black players, football fans and society in general to name, shame and Just Say No. What Cunningham kicked off, Kick It Out have ran with – as the England football team’s powerful response to the disgraceful, dispiriting circumstances they recently endured in Sofia showed.

All this and more was discussed in a lively, thoroughly engaging post-show discussion with pioneering musician, singer-songwriter and producer Midge Ure, hosted by RoughHouse Theatre director/Getting The Third Degree co-director Shane Morgan. “Let’s get this out there from the off,” Morgan joked, during the introduction, “Midge is neither black nor a footballer.” That’s as maybe. But the points discussed in the talk that followed were as inextricably linked to the issues raised in the drama we’d just been presented with as… well, as Cunningham himself (who died in a car accident in Spain 30 years ago this year) will remain inextricably linked with the unique legacy of strength, graciousness and panache he continues to inspire multiple generations to aspire to, both on and off the field.