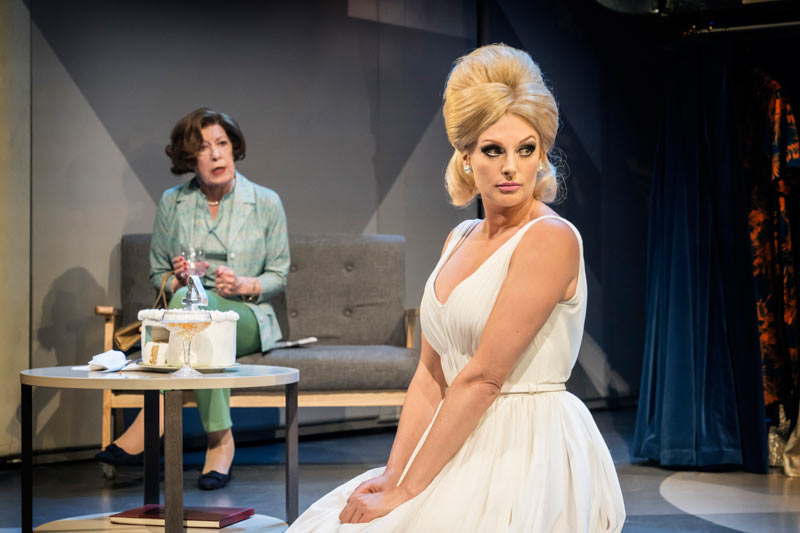 Mary Isobel Catherine Bernadette O’Brien, born in Enfield in 1939, has provided much of the soundtrack to our lives. In 1964, she didn’t know what to do with herself. In 1965, she was in the middle of nowhere. One year later, she only wanted to be with you; the year after that, she was pondering how she could be sure.

Scroll forward 21 years, and the Pet Shop Boys helped her ask what she’d done to deserve this? And in 1994, cult director Quentin Tarantino said that, had he not been able to use an original recording of one of her songs in his neo-noir demimonde crime thriller Pulp Fiction, he wouldn’t have filmed the scene in which the song is featured: the pivotal moment when Vincent Vega (John Travolta) meets Mia Wallace (Uma Thurman.)

That song was Son of a Preacher Man. That singer was Dusty Springfield. And this new musical – written by multiple award-winning writer Jonathan Harvey, directed by Olivier winner Maria Friedman, starring Katherine Kingsley and enjoying its world premiere in Bath – is a beautifully-constructed, shimmering celebration of the life (and up-close-and-personal insight into the complex personality) of the woman who transformed both herself and the British/US music scene.

Katherine Kingsley is utterly astounding as Dusty. The iconic trademarks are all in place: hair, wig and make-up designer Carole Hancock has worked wonders recreating her fabulous frocks, multiple variations on the peroxide blonde bouffant theme and that eyeliner. All while uncannily accurate mannerisms, from sweeping hand gestures to punctuate key moments of her songs to uber-cool use of the word “No!”, further bring Dusty back to compelling, almost hyperreal life.

But oh, that voice! Close your eyes when Kingsley is singing I Only Want To Be With You, or The Look of Love, or You Don’t Own Me (a particular personal highlight) and you’d swear that Springfield herself has been resurrected and come back to perform, just for us, in the flesh, for one night only. Fabulous.

But Dusty is so much more than just another anodyne jukebox musical; to the contrary, this dramatisation most definitely doesn’t attempt to gloss over the real dramas going on behind the legend, and it may come as a surprise to many to learn just how turbulent the singer’s personal life was. In 1966, she was officially the best-selling female solo singer in the world – the hits just kept on coming.

Then they stopped. But then they started again… and every moment of that journey – from the heady, early days of success to the final moments on her deathbed (Springfield died in 1999), as well as her success of bringing Motown to Britain, being deported from South Africa in 1964 for refusing to play to segregated audiences, her troubled relationship with her mother Kay, various hirings and firings, her love life, her struggles with various addictions, her near-tragic fall from grace and her 1987 revival along the way – is here; it’s a riches-to-rags-to-riches story, lavish in detail, laden with humanity… and punctuated at every turn with monumental, evocative songs.

But full credit here (and there is much credit to pay) has to go to an ensemble cast who seamlessly keep the high-octane pace up at all times, impeccably choreographed against an exquisitely-crafted, ever-changing set (the Pet Shop Boys ‘moment’ in particular is a theatrical work of art).

The revival of her legacy endures long after the full-on diva-style, triumphant gloriousness of You Don’t Have To Say You Love Me, right at the end of this triumphant, glorious musical – and Dusty really is a triumphant musical, in more ways than one.