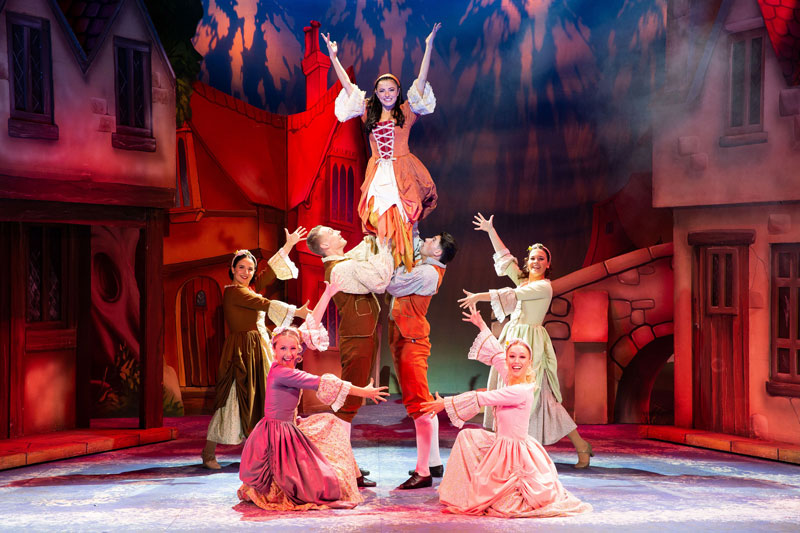 Even if you can’t abide turkey, don’t get the point of corny cracker puns and curse the commerciality of the whole shebang, it’s my bet that we all secretly enjoy some, if not all, of the traditions that make this time of the year what it is: a sparkly celebration in the midst of the murky deep midwinter… and let’s face it, the current murky deep midwinter is shaping up to be as murky and deep as last year’s was.

But the fact that Theatre Royal Bath’s proper panto is back after last year’s forced hiatus is very good reason to celebrate this December – and if this spectacular production of Cinderella fails to float your festive boat, I hereby wave my magic wand and out you as the Grinch that you are.  We all know how the story of Cinderella, her best mate Buttons, her Fairy Godmother, her wicked stepsisters and – eventually – her very own handsome prince rolls along. But what we’d yet to find out is how award-winning comedian, actor, writer and director Jon Monie might interpret what’s arguably the best-loved pantomime of all… until this year.

Despite all the magic and sparkle that really, really good classic panto delivers (and to say that this production has plenty of both would be an understatement), Monie’s script – the bond that glues the whole extravaganza together – is the star of the show.

Traditional, time-honoured interactive audience response sections involve us all (oh yes they do!) while topical references a-plenty bring us bang-up-to-date. So far, so very – well, very proper panto. But in Monie’s hands, the jokes are the gifts that keep on giving: genuinely, properly, hilariously funny; fresh, original, and incorporating a couple of quick fire adult-orientated quips that you really, really hope the kids didn’t get; yup, Monie’s script is bang on the money. But if panto isn’t all about the ensemble, what theatre production is?

Multi-tasking Monie himself brings genuine poignancy to his role as lovelorn Buttons, friend-zoned by Cinderella in favour of Prince Charming’s, erm, charms. Duncan Burt and Nic Gibney as sisters Melody and Harmony Hard-Up respectively bring bling, zing and plenty of innuendo on the theme of a ring to their fresh, modern update on the ugly sisters (for which they get an Amen from me); Dani Harmer gives spectacularly good Fairy Godmother; Elly Jay’s Cinderella is a proper princess (and looks a bit like Kate Middleton, for extra-added authenticity) with a singing voice that predicts future West End musical theatre acclaim; Josh Rose is a properly swoon-worthy Prince Charming, his inherent, vacuous aristo qualities (good work, Monie!) highlighted by Chris Fearn’s suave Dandini.

If this spectacular production of Cinderella fails to float your festive boat, I hereby wave my magic wand and out you as the Grinch that you are

Dance routines? Tick! And all good. Music? Tick! A proper orchestra, playing live. Costumes? Oh, tick, tick, tick! The words ‘sumptuous opulence’ don’t quite do Elizabeth Dennis’ wardrobe department justice: ballgowns with skirts too big to make it through the door of the Assembly Rooms, pantaloons tight enough to make Beau Nash blush and wigs that make you weep with either envy or hilarity, depending on your personal sense of sartorial elegance (or lack thereof)… you get the idea. On top of all this, there’s a transformation scene beautiful enough to bring tears to even the most cynical eyes.

Overall, this glorious production is unabashedly upbeat, brazenly buoyant and full-on festive fabulous from the first wave of the Fairy Godmother’s wand all the way through to the flamboyant finale – oh yes, it very much is.

Tickets for Cinderella can be bought at: theatreroyal.org.uk