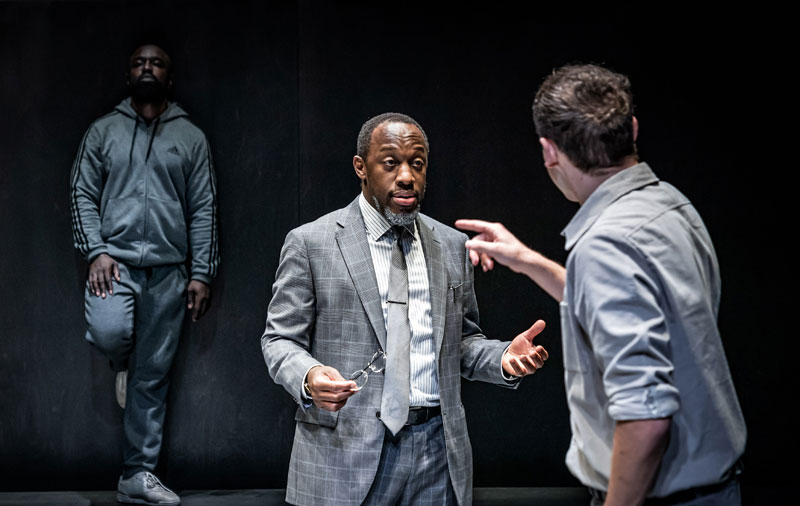 Few writers have the necessary empathy, judgment and intellectual awareness to create a nuanced, compelling drama that puts a spotlight on uncomfortable truths and controversial opinions that are so often forced to be silenced for fear of causing social discomfit. But long before ‘Cancel Culture’ ruled the social media waves (20 years ago, to be precise), Joe Penhall’s powerful modern classic Blue/Orange put issues around racism, mental health, privilege, social disparity and the complex hierarchical structure within the NHS to the forefront of a stage play that’s as much about the frailties of human nature as it is about all the other contentious cogitations it raises.

The drama takes place in a soulless ante-room in a London psychiatric hospital. In-patient Christopher has been sectioned in the hospital for 28 days – why was he sectioned in the first place? We never actually find out. But what we do know is that Christopher is more than ready to leave… or is he?

While director James Dacre’s brand new production has reinvigorated this much-dissected drama, it most definitely doesn’t have ‘revival’ written all over it – it doesn’t need to; recent history and an escalation of the issues raised in the play have kept Blue/Orange relevant, not least of all during the height of the #BlackLivesMatter movement. But a radical casting revision has updated the perspective: in Dacre’s production, Robert – a role written for, and traditionally played by, a white actor – is black, switching the dynamics between the three characters. But if the fact that Christopher, too, is black but Bruce is white highlights a sinister undertow at play beneath the ostensibly professional integrity of the two doctors, how come Blue/Orange was as contentious in 2000 as it is today? In a similar fashion to Mamet’s Oleanna, the audience is tossed along on waves of which of the characters are right, which ones are wrong, who is disillusioned… and who is delusional.

According to Christopher, oranges are blue and former Ugandan president Idi Amin is his father; those perceptions alone are enough to make psychiatrist-in-training Bruce believe that Christopher is a paranoid schizophrenic who must be detained. Senior consultant Robert, however, has a different opinion altogether, suggesting that Christopher is suffering the “black psychosis” that has led to inordinately high rates of black patients being sectioned – indeed, Robert is hoping for a prestigious professorship by highlighting and analysing a concern that he believes is cultural rather than medical… oh, and space is at a premium in the hospital so they need to free up beds.

Giles Terera is a smooth, charismatic, pompous and often foreboding Robert: the arrogant, haughty senior consultant with an over-inflated ego. But Ralph Davis’ Bruce fights a good fight against his vainglorious superior as he battles to talk his mentor into believing that his professional assessment of his patient is scientific rather than subjective. And as the tormented character caught in the eye of the storm Michael Balogun owns the stage, even when he himself is often completely overlooked by the only two people who have the power to help him as they focus instead on their own autocratic struggle, conveying an almost supernatural ability to convey clarity, anger, desperation, frustration and wit at lightening speed. As all manner of heated exchanges flit, flash and flicker between the three men, it’s almost impossible to take our eyes of Balogun even when he’s merely standing in the shadows to the side of Simon Kenny’s sparse, neutral set.

“Whose thoughts am I thinking?” Christopher asks, after a particularly potent altercation between his two doctors… and it’s a question that the audience is left to consider for themselves long after the Ustinov’s lights go down.