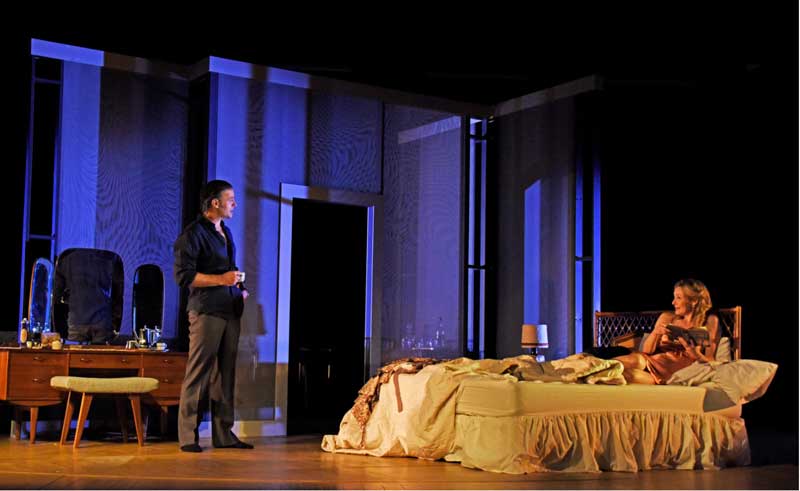 The bars are temporarily closed, there’s a one-way entrance/exit system in place and the wearing of masks is de rigueur. But the lights are on, the scene is set and the curtain’s up: the Theatre Royal Bath is back open for business, the Welcome Back season is well underway… and the opening production is most definitely celebration-worthy.

It would be easy to write off what’s ostensibly an age-old theme examining and exposing the impact of breaching the rules of loyalty, trust and honesty in a marriage as time-wearied. It would be easier again to dismiss the three characters in the spotlight in Pinter’s classic, classy analysis of the subject – written in 1978, and widely regarded as one of the most prolific writers of a generation’s major dramatic works – as privileged London literati types with only their own best interests at heart. But the fact that Betrayal is based on fact (it was inspired by Pinter’s seven-year affair with Joan Bakewell), and the fact that Pinter is so, so very good at fly-on-the-wall realism (you’ll never find rhetorical oratories or unlikely plot devices cluttering up a Pinter script) means that nothing is even close to deserving of being written off here.

The story of the complex emotional web woven between Emma, her husband Robert and Robert’s best friend Jerry is told in reverse chronological order that serves to efficiently, meticulously untangle that web rather than confuse us by structure; when we’d usually be anticipating “what happens next?”, we’re intrigued by “what happened before?” – and its an easy rhythm to slip in to, thanks in no small part to director Jonathan Church’s elegant governance.

Jerry (Edward Bennett) is probably the easiest character of the trio to… well not exactly like, but empathise with: a slightly bumbling romantic played with pathos and bathos in equal measure. Robert, meanwhile, is a rather hollow, slightly sinister figure verging on misogynistic and played to skilfully brooding, under-dramatic effect by Joseph Millson. As for insecure, self-centred, unfulfilled Emma: I don’t think we can particularly like (or feel in the slightest bit sorry) for her, but we love Nancy Carroll, being her.

This intelligent domestic yarn, set against a neat selection of minimalistic backdrops, spans almost nine years but runs for just 75 minutes – and not a single second of the terse dialogue and tense/tranquil silences that carry the drama along is wasted.