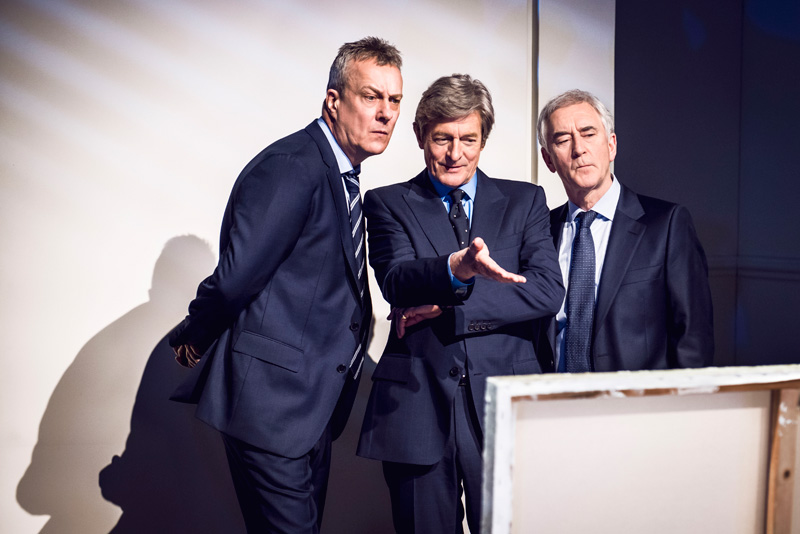 In 1994, Yasmina Reza’s concise, intelligent, highly astute play Art premiered at Comédie des Champs-Élysées, Paris. Two years later it opened in London, translated from the original French by Christopher Hampton, and two years after that, it transferred to Broadway. Two decades on, Art continues to be one of contemporary theatre’s biggest success stories and the winner of all manner of prestigious awards including a Tony, a Molière and an Olivier Award… for comedy.

Although delighted by the acclaim, Reza was surprised to receive the gong: “Comedy? I thought I’d written a tragedy!” she said, in an interview in 1998. And therein lies the utter joy of Art: it’s funny, it’s tragic, it’s many things to many people… but few could come away from the theatre after an evening in the company of Serge, Marc, Yvan and a blank canvas apparently worth £200,000 and say they didn’t enjoy the experience.

Serge has blown £200,000 on what looks for all the world like a blank white canvas, ‘painted’ by a ‘fashionable’ modern artist. He thought his friends would approve of his purchase, but Marc seems to be offended by it and Yvan – stuck in a dead-end job and frustrated by family bickering over his wedding plans – just wants a straightforward good night out with his mates.

Of course, the purchase of the painting raises all manner of questions, and stirs up plenty of debate about the value (or otherwise) of art – but if you want more of that kind of thing, you’d be better off reading the current issue of Aesthetica.

If you’re in the mood for being a fly on the wall as three friends test just how strong the bonds that have sustained their friendship for decades really are, you’ve come to the right place. Bear with me, though, because we’re sticking with the literal art theme for a moment in order to get this review into the gallery.

If the three friends represent the three stages of the structure of a painting, Serge (Nigel Havers) is the primer on the canvas: the foundation of the whole theme. Marc (Denis Lawson) is the sketched-out composition that guides the artist towards the finished composition and Yvan (Stephen Tompkinson) is the colour that brings the painting – in this case, definitely an abstract – to life.

Havers, Lawson and Tompkinson fully live up to their reputation as three of British theatre consummate crowd-pleasers, the script represents a dialogue masterclass, and the timing throughout this fast-paced 80-minute/no-interval production is flawless. Yvan, though, is the stand-out personality here, and the one we’re most likely to identify with. When he delivers a lengthy, exasperated monologue about the multiple variations of step-parents’ names that his fiancée insists must be included on their wedding invitation, the audience’s empathy was palpable, and reflected in a spontaneous, and richly deserved, round of applause.

This triptych of male kinship, however, contains extreme contrasts of light and shade. Witty asides, snarky comments and ostensibly bloke-ish (in the well-heeled, middle-aged, middle-class interpretation of the word bloke-ish) camaraderie swiftly degenerates into far more damaging territory, whereupon female partners are insulted, lifestyles ridiculed, world views challenged, and even the prosaic act of sharing a bowl of olives become laden with metaphor… and the expensive blank canvas gets caught in the crossfire.

Will Serge’s investment survive? And will the friendships? And what does it all mean? As Picasso once said, “the purpose of art is washing the dust of daily life off our souls”. Serge, Marc and Yvan wash the dust off their souls and hang them out to dry in public… and the result is sheer artistry.