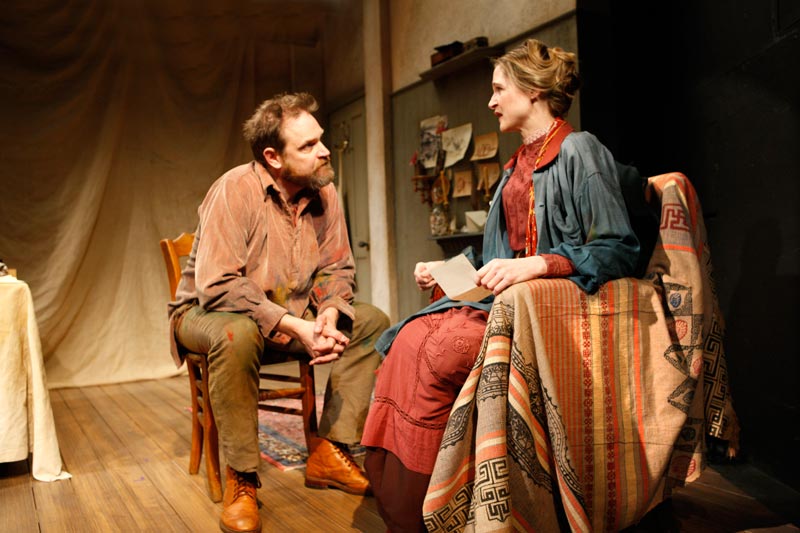 Struggling to forge an independent life for herself as an artist, torn between three lovers, and eventually ‘stuck’ in France where she’s bombarded by the conflicting opinions of a glamorous widow who thinks it’s fine to snog other women’s men as long as nobody talks about it afterwards, Agnes Colander’s attempts to create a happy, satisfied life for herself are plagued by obstacles. But then again, the back story of how Edwardian playwright, director, actor, critic and arts-world luminary Harley Granville Barker’s ‘lost’ play is finally being showcased to contemporary audiences isn’t a straightforward one either.

When Granville Barker (a founder of the repertory movement, who went on to write The Voysey Inheritance and Waste) wrote Agnes Colander circa 1900 at the age of just 23, he himself declared it to be “a very poor work that should be destroyed”. But it wasn’t. Writer Colin Chambers discovered the only known draft of the play at the British Library, and gave it to American playwright Richard Nelson to revise. Today, the world premiere of the play can be seen at the Ustinov theatre, directed by contemporary arts-world luminaryTrevor Nunn.

On many levels Agnes Colander is very much a play for today, tackling issues such as gender (in)equality, sexual identity and women’s fight for independence. If we also take into account the fact that the play was written 18 years before women over 30 were given the right to vote in Britain, 23 years before the Matrimonial Causes Act made grounds for divorce the same for women and men, and a whole three decades before Virginia Woolf wrote the landmark feminist essay A Room of One’s Own, then Granville Barker’s Agnes easily earns Protofeminist commemoration status – and Naomi Frederick does an admirable job of bringing her to angst-ridden life. It’s ironic, though (or is it, given the subject matter?) that the male characters really give context to the play’s overall themes.

Matthew Flynn as Agnes’ lover (and fellow painter) Otho Kjoge is, in all scenes that involve him, the dominant force here in more ways than one: belligerent, boorish but somehow bewitching (best scene: the roast chicken dinner, which sums up more about Otho’s egocentric personality and lustful appetites than the quick glimpse of one his paintings ever could).

Freddy Carter as young, lovesick Alexander Flint (aka Agnes’ one-way ticket to conventional ‘redemption’) is the perfectly anodyne contrast to the characterful Otho, while Agnes’ husband, although never seen, is referred to so often (and quoted, via the letter that’s causing so much of Agnes’ angst in the opening scenes) that we find ourselves giving his point of view as much consideration as we do hers.

The dialogue-heavy action is split between Agnes’s London studio and Otho’s seaside cottage in Normandy, both locations cleverly, atmospherically designed (by Rob Jones) to bring an extra-added dimension of intimacy to key scenes largely dominated by the male perspective. So does Agnes get lost amongst all the macho hubris? Fortunately not.

The fascinating Emmeline Marjoribanks (Sally Scott) is the character who really adds flesh to Agnes’ desultory personality, and reminds us that ultimately we’re on woman-driven plot territory here. When Agnes gives into bouts of ‘me-me-me’ middle-class moaning (which she does, frequently,) it’s Emmeline – superficially the affluent, flirtatious, seductive but sagacious fellow expat and good-time girl who uses her status as widow to bend all manner of moral mores – who keenly and non-too-subtly challenges Agnes’ dissatisfaction to the max. For better or worse? That’s left up to us to decide.

But if Emmeline is a Marmite character then Alice – despite her apparent strength and complexity – veers too much towards bland Dairylea territory for my tastes. “Only little bits of me are developed, and those aren’t the best,” she declares, at one point – and indeed, I left the Ustinov feeling as though I hadn’t quite seen enough of her to really understand her motivations. Perhaps that was how Granville Barker felt about the play too?

Such considerations notwithstanding (for obvious reasons), it remains the case that, more than a century since its inception, his ‘lost’ work has been found by competent, caring custodians; overall, Agnes Colander is a beautifully directed, skilfully acted drama offering multi-faceted intellectual sustenance.