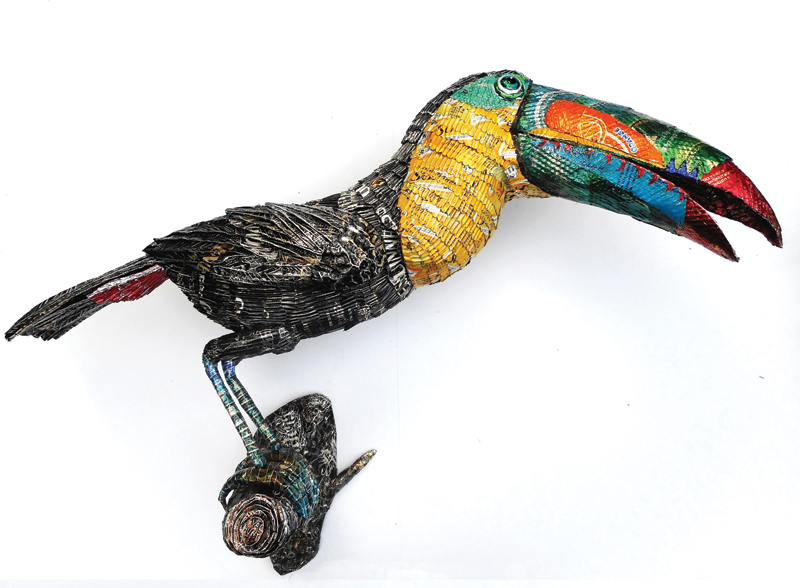 Val Hunt’s upcoming exhibition at the Victoria Art Gallery profiles her sculptures made from found and recycled objects – bottle tops, tin cans, scrap metal and plastic containers. It’s not just a creative process, because protecting endangered animals is at the heart of her motivation and philosophy, says Melissa Blease

Planet earth is turning into one big rubbish dump. Our oceans are clogged up with an estimated 12.7 million tonnes of plastic, largely bottles, bags, packaging, microfibres and microbeads. In the last year alone, 44,511 tonnes of non-recyclable metals from ‘innocent’ foil and glitter-coated gift wrap to hefty electronic appliances cluttered up UK landfill sites. Some 29% of food packaging is non-recyclable, with orange/yellow nets and black plastic among the worst offenders. Dirty statistics, eh? While environmental responsibility has never been as high on the social agenda as it is right now and the vast majority of us (hopefully) do our very best to reduce our output of trash, human beings are capable of doing very ugly things to the beautiful planet that we call home. Some people, however, are taking a distinctly different approach to raising awareness of an imperative call for change.

Creative recycling artist Val Hunt’s work features in many permanent collections and has toured in exhibitions around the UK, Denmark, Japan, the UAE and the USA. Her latest exhibition Endangered and Extinct opens at the Victoria Art Gallery on 23 February, and brings together a singularly bewitching, creative collection of sculptural pieces both large and small, all of which offer unique appeal… and have been created from materials usually destined for the kerbside recycling collection, the tip or the dump.

“Our oceans are slowly turning into a plastic soup, and the effects on ocean life are chilling,” says Val, when asked about the inspiration behind the exotic birds, fish, dinosaurs and species of flora that we can expect to encounter at the exhibition. “Big pieces of plastic are choking and entangling turtles and sea birds; tiny pieces are clogging the stomachs of creatures who mistake it for food, from tiny zooplankton to whales. Plastic is now entering every level of the ocean’s food chain and even ending up in the seafood on our plates. While many people are becoming aware of the devastating effects of the trillion of tons of discarded waste that’s destroying the planet we live on, the oceans are getting clogged up and there has to be a limit to landfill sites. Packaging must be biodegradable, and we all need to rethink how to recycle effectively. I hope my exhibition will encourage more of this way of thinking, as it presents a subtle message about recycling and preservation.”

Most of us, however, don’t spot the potential for beauty in such prosaic materials – and few of us can envision the creation of a magnificent creature from a crumpled, discarded beer can. “Ah, but I come from a family of inventors and love the challenge of inventing new ways of constructing pieces and solving the numerous practical problems that always arise when creating something,” says Val. “I’m also a fine artist, so I can paint and draw. Even as a child, I was always very artistic and enjoyed creating something out of nothing, and making a worthless object into a precious one. But I don’t look at a can and see, for example, an elephant in it. I look at an elephant first, then experiment with discarded material and find ways of constructing an elephant’s head from it. I had texture and bend, cut and transform the drinks can or other discarded material to change its identity completely. It’s a constant adventure into the unknown; because one is working with an unconventional material in an unconventional way, the end result can be very exciting and rewarding as it is reworked to signal a new meaning.” And Val is no stranger to either new meanings – or new beginnings.

After spending two years at art college, Val worked as a primary school teacher before she became a deputy headmistress. After getting married and having three children, she took a part-time (BA) degree in Arts and Craft Studies, specialising in metalwork and jewellery, and, after graduating became a full time maker. Val’s first touring exhibition, Reincarnated Rubbish, was conceived when she won the Visitor’s Choice prize at Coventry’s Herbert Art Gallery’s Open exhibition in 2002. “The prize offered me the opportunity to stage a solo exhibition in one of the gallery’s enormous spaces – which I managed to fill!” Val recalls.

Reincarnated Rubbish, in its various changing forms, has since been shown in numerous galleries in England and Wales over the years, supporting Val’s aim to encourage everyone to experience the fun of creative recycling. “But despite my use of manufactured materials, most of my inspiration over the years has come from the natural world, which led me to be greatly concerned about – and research – the plight of endangered and extinct species, which is how this new exhibition evolved as time rolled along,” she explains.

But in March 2013, fate intervened in the most dramatic way possible when radiotherapy for a brain tumour took away most of her hearing. “I can no longer hear music, listen to the radio or use the telephone. But my hearing loss and the experience that led to the hearing loss taught me to make the most of what time I have left, and use my potential to the full. Today, my mantra is Carpe Diem: seize the day.”

Val is urging visitors to her exhibition to seize the day alongside her in order to secure the stability of our planet for many, many more days to come. “Of course, I hope that people enjoy the exhibition on an aesthetic and experiential level,” she says. “But I hope too that they leave with a better understanding of the plight of creatures and plant life on the edge of extinction, or already gone forever, because of the behaviour and habits of humans. I also hope that seeing what can be created out of throwaway material will spur people on to experiment and discover the joy of creative recycling themselves.”

Val’s interpretation of 37 species of animals, birds, fish and flora will adorn the gallery walls throughout the duration of the exhibition, including a large weeping plastic Ophthalmosaurus made from a variety of plastic containers, a tuna fish and flying parrot made from drinks can metal, and a terror bird made from scrap metal and Edinburgh Fringe fliers and posters.

Featured image: South American Sulphur-breasted or Keel-billed Toucans are found in humid, open rainforests and second growth woodland areas. They are threatened by habitat loss and hunting for their meat and feathers