One of Bath’s rare detached Georgian buildings has undergone a dramatic restoration. Georgette McCready takes a tour of Cleveland House

Waterside homes are sought after, but to find a house that’s actually built over water is very unusual indeed. But Cleveland House, which boldly straddles the Kennet and Avon Canal, is unique in many other ways, not least as it was one of the earliest purpose-built office blocks ever built in Europe.

Not that there’s anything in this splendidly grand Georgian mansion that smacks of anything as prosaic as an office. Its imposing classic facade is best enjoyed on foot, approached via the historic pleasure gardens, Sydney Gardens, where the house appears to rise majestically above the Kennet and Avon Canal. Cross Sydney Road and we find ourselves outside the railed lawns, where a young yew hedge has been planted. The house has been designed to stand over the water, the Cleveland Tunnel running 173 feet under its length.

There are a choice of two front doors, but take the left hand door for the grandest entrance. Cleveland House was originally called Canal House, designed and built in 1817 by Georgian architect John Pinch the Elder, commissioned by the Duke of Cleveland’s Bathwick Estate and leased to the Kennet and Avon Canal Company.

Its scale reflects the confidence that the pioneers of the burgeoning canal system had in this revolutionary new transport network. No longer would coal, wood and other heavy goods all have to be carried by horse-drawn carts – the canal boats could be loaded to the gunwales and their cargo smoothly delivered from city to city by water instead.

One can imagine the pride felt by the Kennet and Avon Canal Company board members when they arrived in the imposing entrance hall of Canal House, before ascending the main staircase – now fittingly with a red carpet – to reach the double height boardroom on the first floor. As we now know, that early confidence in the canals’ economic success was swiftly dashed as, within 30 years, the steam railway usurped it both in novelty and speed. 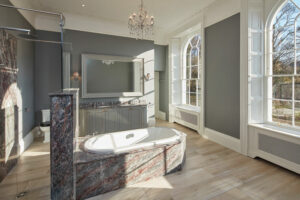 One of the palatial marble bathrooms 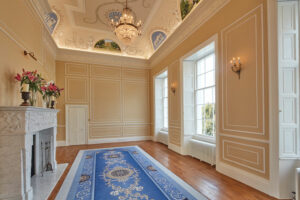 The former boardroom is now a magnificent drawing room

But, fortunately for posterity Cleveland House has been lovingly and painstakingly restored and converted from a former workplace into a near stately home, all to a vision by the Trevor Osborne Property Group, working with architect Ted Brewster of Brewster Architectural Deisgn Ltd. Trevor Osborne, in a career spanning more than 40 years, has developed landmark buildings including Oxford Castle and the Malmaison Hotel project in Oxford, and is currently working on the Buxton Crescent Hotel and thermae spa in Derbyshire.

Cleveland House is a Grade II* listed building with much fine architectural detail, but has been renovated to incorporate all the facilities a contemporary family might need, from the large kitchen-breakfast room, complete with Aga, to five bedrooms, five bathrooms and shower rooms, a home cinema and a new roof terrace. Thoughtfully and untypically of many Georgian homes in Bath, the kitchen is next to the dining room, which makes serving meals a lot more convenient. The latter is a grand room painted in traditional dining room red, its architectural details picked out in gold.

While the rooms to the front of the house look out towards Sydney Gardens, those at the back enjoy a sylvan, rural view over the canal and the gentle traffic of boats pootling past. One can imagine that this would be a lovely spot to start the day, leaving the house for a run along the towpath, or to walk a dog.

Two opulent bedroom suites have been created on the ground floor, both with large marble bathrooms with stand-alone baths, walk through showers and double basin vanity units. As through the rest of the house these rooms are filled with natural light through large windows. Also on the ground floor is a new family room, with lots of windows. This could be used for any number of activities, as a music room, a home office or a party room as it’s ideal for dancing, with its sprung floor.

“One can imagine that this would be a lovely spot to start the day, leaving the house for a run along the towpath, or to walk a dog…”

From this room there’s a lobby which leads outside. There’s a small lawned area and stone steps which lead up to the large terrace over the family room. This is a fabulous outdoor space, large enough to take steamer chairs, some large containers filled with trees or climbing plants, along with room for a banqueting size table and chairs for al fresco entertaining. The terrace also enjoys fantastic views over the city centre rooftops, with Bath Abbey’s tower clearly in view.

When a house has in excess of 6,400 square feet, you can imagine it’s capable of being used in any number of ways. There are two bedrooms and two very desirable designer bathrooms on the second floor, while the lower ground floor provides scope for different uses, whether that be as a self-contained annexe for a family member or for guests. There’s the fifth bedroom down here, plus a shower room and a kitchen cum utility room. The home cinema is a vaulted room, cleverly lit, plus there’s a big wine vault which will excite any oenophile looking round the house. It’s easy to imagine this floor being busy with caterers as Cleveland House feels like a sociable space, ideal for entertaining for dinners and parties.

The cellars are interesting to explore too. Down here you get a sense of the original building’s past and literally its links with the Kennet and Avon Canal. You can make out the barrelled shape of the tunnel in the floor of the cellars. Down here there is a chute which leads out into the tunnel. Historian Kirsten Elliott, in her book about the history of the canal, Queen of Waters, explores the theories of what this tunnel’s purpose was. She dismisses the idea that it was used for waste – no self-respecting employee of a canal company would dump stuff into the water. There’s a bend in it too, which makes it unlikely that paper messages were thrown down it. Rather, Kirsten suggests, it lends itself to being used as a kind of speaking trumpet for messages to be bellowed up and down the shaft. 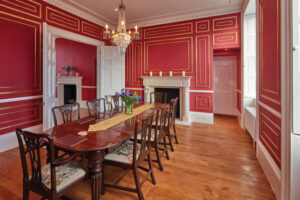 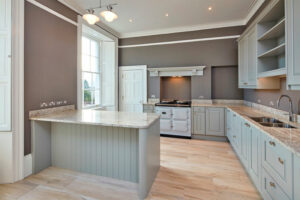 We like the theory that the great civil engineer Isambard Kingdom Brunel worked out of Canal House for a time during the 1830s. This can’t be verified, but records show that from 1833 Brunel was involved in every level of design for the Great Western Railway, including the section that runs through Sydney Gardens and his dealings with the Kennet and Avon Canal Company are well documented, including plans for the diversion of the canal at Darlington Wharf to make way for the railway line.

The car – that mode of transport which largely usurped the railways just as they did the canals – may be kept in a large garage to the side of the house, where there’s enough room for four vehicles, in addition to off street parking for more vehicles.

Trevor Osborne is known in his adopted home city of Bath for his commitment to the cultural, charitable and educational life of the city. He was a trustee of the Holburne Museum during its extension, is currently supporting the Bath Abbey Footprint project, is a governor of Bath Spa University and on the board of Bath Mozartfest and Bachfest. He is also one of the founders of the Bath Percent Club, which encourages charitable giving by local businesses, and is pleased to have worked with members of this group during the refurbishment of Cleveland House.

Cleveland House is being marketed through Carter Jonas for offers in the region of £3.5m. For an appointment to view tel: 01225 747250. Visit: carterjonas.co.uk/bath.