Prue Leith: Baking up a storm

With many of us having become top notch chefs during the weeks of Lockdown, we look back at our interview with a leader of the gastronomic pack, Prue Leith. Melissa Blease spoke to The Great British Bake Off judge ahead of her appearance in Bath last year about her work on the Orient Express, her food heroes and her polenta cake.

Prue Leith was appointed an OBE in 1989, a CBE 21 years later and is the recipient of 13 honorary degrees of fellowship from UK universities. She’s written 12 cookery books, seven novels, an autobiography and countless columns; she founded both a Michelin-starred restaurant and a School of Food and Wine… and she’s been a judge on BBC Two’s Great British Menu for 12 years. And yet the woman who has recently been introduced to a whole new generation as the expert cook claims that, prior to her most recent TV success, she could walk down the street unnoticed.

“Hardly anybody who became a Great British Bake Off fan when the series first began would ever have heard of me, because a lot of that fan base weren’t even alive when I wrote my last book,” says Prue, talking to us ahead of her forthcoming visit to Bath to promote her first new book in 25 years. “It’s only people of a certain, erm, vintage who’d ever heard of me before I took over from Mary Berry!”

Born in South Africa in 1940, Prue relocated to Paris in her late teens and attended the Sorbonne. “I got into food when I was living in France because it’s difficult not to,” she recalls. In 1960, she enrolled at the prestigious Cordon Bleu Cookery School in London where, to supplement her student budget, she developed a sideline catering for private dinner parties – and a chance encounter with a butler who worked for a firm of stockbrokers proved to be a pivotal landmark in her early career. “I was living in my little mews house and making lunches and dinners for private parties. But as I did all the shopping, cooking, serving and washing up on my own, I could only really do one dinner a day. But the company just wanted cold buffets delivered ready-to-eat; I could feed a lot of people fairly easily, some days preparing the company buffet while working on a hot supper for another job – that made a huge difference to my little business.” But that business didn’t stay little for long.

“Being responsible for the food served on the Orient Express was another big leap forward,” says Prue. “I got the job after the owner of the Orient Express asked me to cook a trial lunch for him. The meal had to be served on the Pullman train in the half hour gap between Victoria and Folkestone. I decided to do a summery green pea soup followed by cold beef and interesting salads, but I wanted to make it suitably memorable, so I created little croutons in the shape of steam trains, floated them on top of the soup and made little puffs of smoke from blobs of cream. My little trains were apparently enchanting enough to get me the job! I owe a great deal to those croutons.”

Prue developed her businesses including party and event catering company Leith’s Good Food, Leith’s School of Food and Wine and her Notting Hill restaurant, chairing and founding all manner of charitable institutions and educational initiatives while maintaining non-executive status on various boards including British Rail, British Transport Hotels and Whitbread PLC. But in 1993, she decided to follow a major career path diversion.

“I stopped writing cookbooks because I wanted to write novels,” she says. “So I gave it all up – the cookery school, the restaurant, the catering company, the cookbooks and columns – and resigned from all the boards, apart from selected charities. That was that; I stayed at home and wrote seven novels and my autobiography, Relish.” But as we all know, Prue’s ‘life in food’ story doesn’t end there.

“My husband says I’ve made more cakes for him in the last year than I have in the eight years we’ve been together!”

In 2006, Prue was “lured back into the food world” by good friends Oliver Peyton and Matthew Fort – the other two-thirds of the exacting Great British Menu judging triumvirate. “The Great British Menu chefs reinvigorated me – I’d find myself writing down what I’d eaten at a judging round, or asking for a recipe, or trying to reproduce what the chefs had created at home. But it was The Great British Bake Off that really inspired me to write another cookbook. I found myself getting so involved with 12 amazing bakers, each of whom are so imaginative, and sweet, and clever; I get to know them all very, very well indeed, and I often take their recipes home with me – my husband says I’ve made more cakes for him in the last year than I have in the eight years we’ve been together!”

Prue’s new book is for cooks of all levels and experience, guaranteeing that “nothing is over-complicated, many recipes are fairly easy to make, and most of them focus on fast and fresh.” So in many ways, we’re on classic Prue Leith cookery book territory? “In a way, yes. But food has changed so much since I first started writing about it,” she says. “It’s so much more interesting now than it was even 20 years ago, and we can easily find ingredients that I used to struggle to get hold of. If I mentioned avocado, broccoli or even a green pepper when I first started writing for the Daily Mail in the early 1970s, I’d get indignant letters from people saying they’d never heard of such things. Today, we can buy things like sumac and za’atar and balsamic glaze in almost any large supermarket. How we cook has changed too because people haven’t got the time to do the classic, two-day consommé kind of cooking anymore – they want something they can put together in half an hour. And people are much more aware of healthy eating – because of that, I considered updating my recipe for Tarte Normande for this book. But I thought no, the glory of a Tarte Normande comes from the amount of butter there is in the pastry, the amount of cream in the filling, and the sweet apricot jam on top – the result is an utterly divine mouthful. So I put it in just as it was in one of my very first books.” And as Prue is fond of telling the Bake Off bakers, it’s definitely worth the calories.

On a less extravagant theme Prue says that her polenta cake is the recipe she’s most likely to turn to again and again. “It’s simple, delicious, gluten-free and perfect served with crème fraîche at the end of a dinner party or just enjoyed with a nice cup of tea.”

Prue talks of her own food hero (“I’ve known Jamie Oliver since his Naked Chef days; he’s an absolutely lovely boy. I call him Saint Jamie because his heart’s in the right place and he’s done so much for food education”), chefs she most admires (former GBM winner Tommy Banks), and her favourite restaurant (the historic Bentley’s Oyster Bar and Grill in London’s Mayfair.)

Prue’s recently acquired status as style icon comes up too, not least because she wore an eye-catching hand-painted outfit from Bath textile artist Carole Waller for a photoshoot for a recent Good Housekeeping magazine cover: “I love Carole’s work,” says Prue; “I have another of her pieces in my collection too.” But there’s one more question I just can’t help asking. “No, I’ve never been the recipient of the Hollywood Handshake!” she laughs. “He keeps telling me that I should start a trend for the Prue Pat, but really! That sounds so patronising.” 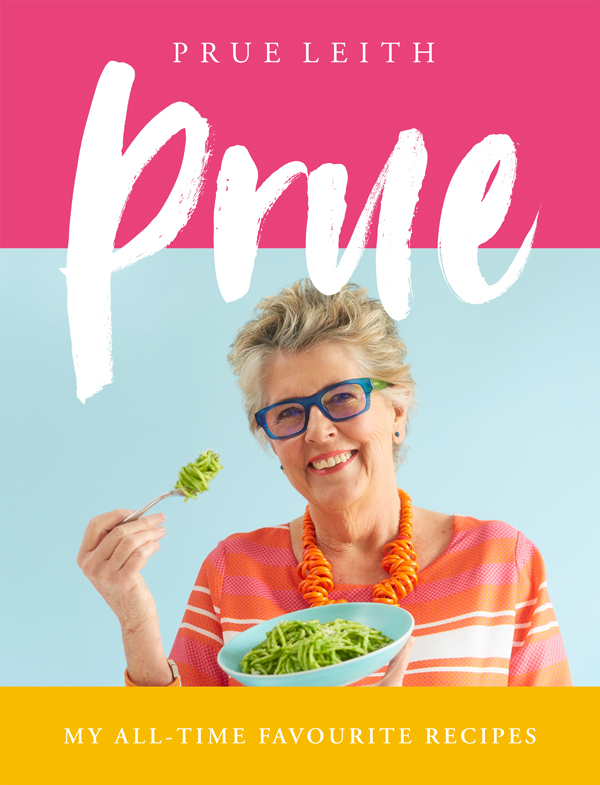