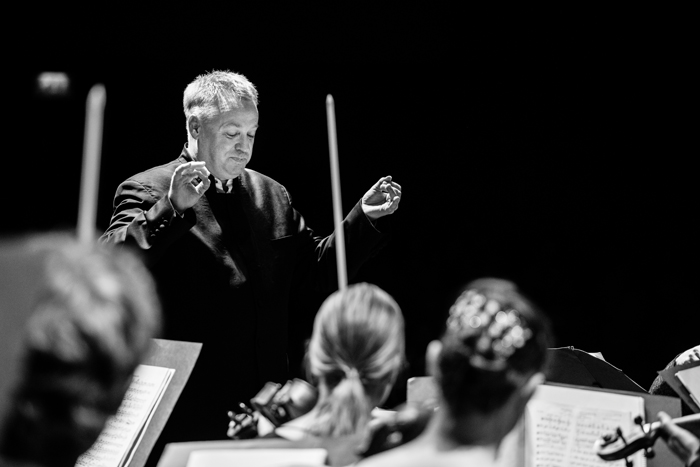 Playing to the crowd: Interview with Jason Thornton

Watching The Snowman at Christmas is an essential part of the season’s magic for many. That’s especially true in our city as Bath Philharmonia has been playing it for 20 years – and this year, there’s an added bonus, discovers Melissa Blease

I had imagined that being a symphony orchestra conductor might involve time reclining on a velvet sofa sipping sherry in between concerts.

“Haha, I wish!” laughs Jason Thornton, music director and principal conductor of Bath Philharmonia. “There’s no time for any of that. I’ve spent most of today getting through office admin, and now I’m sorting our gear out ready to load our van up and drive it to a primary school tomorrow!”

Indeed, since Jason – a former Ralph Allen schoolteacher who formed the Bath Philharmonia in 1996 – moved the orchestra from amateur to professional status in 2000, there’s been little time in which to indulge in downtime. “We decided to go professional without really knowing what was involved,” he recalls. “Looking back, we had terrible struggles to endure in our early days, but we had massive good fortune along the way too; now here we are, celebrating our 20th season as a pro-orchestra! We’re still very young; a lot of our fellow orchestras in the UK are 75, 80, 100 years old. But hey, they all had to start somewhere!”

Today, Bath Philharmonia’s firm footing on the Bath institution charts can largely be credited to the popularity of their regular annual Christmas event at The Forum, when they bring Howard Blake’s magical score for Raymond Briggs’ animated masterpiece The Snowman to fully orchestrated life. This December, they’ll be bringing a special extra-added bonus to proceedings… But first, what about the orchestra’s year-round work?

“I’ve always had a love for introducing as many young people as I can to music and the creation of music,” says Jason, chatting to me in the orchestra’s Widcombe HQ. “When the Bath Philharmonia turned professional I retrained as a music leader so I could carry on teaching music, but not necessarily in a classroom situation. As we became more established, we started introducing education projects and in 2009, I met two amazing people: Sonia Hutchison, CEO of BANES Carers’ Centre, and Victoria Clare, who established Wiltshire Young Carers’ Service in 2002. At the time, I didn’t know anything about young carers, but we sat and chatted and decided to do some projects together. Ten years on, and we’re doing more than ever before. We’ve done six projects this year, all around six or seven days long, and we’re going to be working a lot more with young carers across the south-west next year.”

The additional work that Jason and his orchestra does isn’t all about young carers, either. At the epicentre of the Bath Philharmonia schedule, their creative learning team creates, shares and performs original music with local schools, helping young people develop their musical skills, opening up new opportunities for a whole new generation of concert-goers, and making live orchestral music accessible to all by distributing free tickets for the orchestra’s concerts to young people at schools across the city. These are the initiatives and collaborations that have led to Bath Philharmonia being nominated for a PRS award for their work in the field.

“PRS awards are the equivalent of the BAFTAs in the classical music world, so for a small organisation like us to get nominated for one is fantastic,” says Jason. “We were shortlisted from 70 projects in the orchestra sector, and we’re down to the last three.”

Rupert Bear and the Frog Chorus has never been performed live before; we’re the first orchestra to do it

The Christmas performance has always been special, and their best-selling concert of the year. “We’ve been doing The Snowman at The Forum for 20 years – the audience adores it, and we love it too,” says Jason. “Like most of us, I watched it as a kid, and ever since then I wanted to perform it live, with film.” And this year, there’s a very special addition to the programme. “Rupert Bear and The Frog Chorus was another one that I absolutely adored when I was a kid – but it’s never been performed live before; we’re the first orchestra to do it,” says Jason.

“Paul and Linda McCartney wrote it, George Martin orchestrated it, and it was recorded in Abbey Road Studios. But after it was released [We All Stand Together, from the animated film Rupert and the Frog Song, reached number three in the UK Singles Chart in 1984 and re-entered the UK Singles Chart again in 1985] it was never touched again. So, we started communicating with Paul McCartney and George Martin’s estate and I’ve ended up with access to all the original manuscripts that George Martin wrote for it, putting it into performable parts and scores. I’ve been working alongside George Martin’s original manuscripts for the last few weeks, which has been an amazing experience; it’s even got Paul’s original notes and alterations on it, it’s fabulous!” So can we expect a very special guest to be in the audience alongside us on 21 December? “Well, we’ve put the invitation out there, so you never know…!”, says Jason.”

Celebrity special guests and festive fun aside, Jason has a key message that he wants to convey to people of all musical tastes. “Contrary to the old-fashioned image of orchestras and classical music, we’re not stuffy in any way, shape or form,” he says. “You don’t have to dress up to come to our concerts, you can clap when you like – you can just enjoy the experience. We have people introducing the pieces, we talk with the audience – it’s just like any other gig. We don’t just do old favourites and greatest hits either – we shake it up with modern pieces because if we don’t pass all this down to the next generation, what’s going to happen?”

As that’s a question that we hope will never be answered. So, Jason: is a conductor the ultimate symphonious showman? “If you’re not doing it correctly, then yes, it probably is. But if you’re conducting to look good in front of an orchestra, you’re not doing your job properly. It’s the same with musicians: flashy is never usually very good. The composer and the music should be the star of every concert, every time.”

What’s your favourite piece of music? “I love it all, whether it’s the stuff that we make up with young carers, a Beethoven symphony, or a modern piece. But if the piece of music that I’m working on at any given time isn’t my favourite at that time, then that’s a bad sign.”

Do you ever put Radio 1 on? “Yes, I do! In fact, as I’ve got older – I’m 49 now – I’ve started to get into pop music, whereas as a kid I was always into classical music, so I’ve gone the opposite way around. I quite like dance music and all that sort of stuff. Good music is good music!”

And what’s the best thing about your job? “Everything: the variety, the creative learning projects, the people, the gigs – everything. I have to pinch myself every day because I can’t believe how lucky I am.”

The Bath Philharmonia: a gift that Bath should treasure for life, not just for Christmas. When you go forth and kiss their Frog (Chorus) this December, raise a glass of sherry to their prince, Jason Thornton – he’s definitely deserving of the cheers.

Bath Philharmonia presents The Snowman/Rupert and the Frog Song at The Forum, Bath on 21 December; bathforum.co.uk; bathphil.co.uk