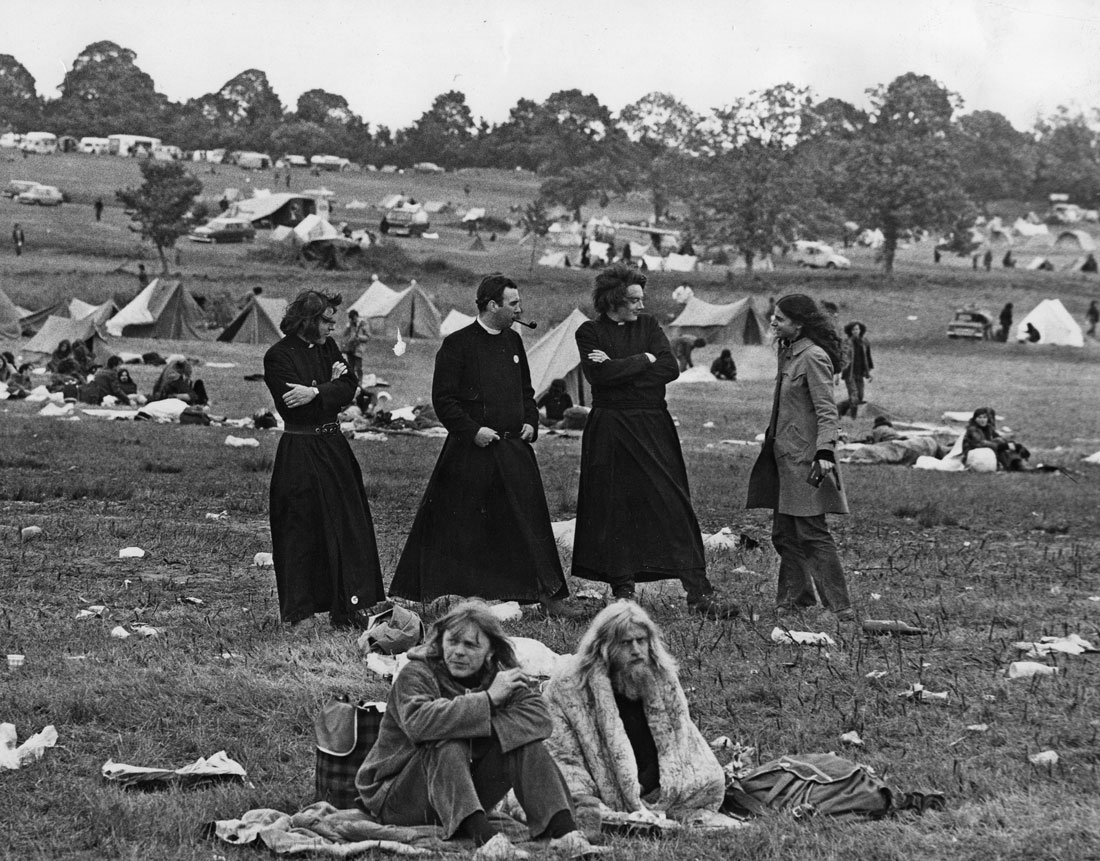 Play it again Mick – The very first set at Glastonbury 1970

In 1970, Bath DJ Mick Ringham was asked to play some records on a farm site in Somerset. The rest, as they say, is history… We chatted to ‘Mad Mick’ who played the very first set at Glastonbury.

Fifty years ago this autumn, a Somerset farmer booked a few musicians to play in a field. About 1,500 assorted hippies, folk and blues fans and Woodstock wannabes turned up, paying a pound a head to get in. The farmer was Michael Eavis, and the one-day festival at Worthy Farm was called the Pilton Pop, Blues & Folk Festival.

This month, the Glastonbury Festival of Contemporary Performing Arts – or Glasto to its friends – would have been celebrating 50 years, and if it weren’t for a global pandemic it would be attracting over 800 acts and entertaining close to 220,000 revellers.

Back in 1970, Mick Ringham – before his days as city local councillor, estate agent and businessman – was a young newlywed, living in what he describes as “the skivvies’ quarters” of a Georgian house in Bath, with a shared toilet and a bath, which doubled up as seating, in the kitchen. He had become a DJ ‘by accident’ in 1966: “I was working as a cleaner at the old Regency Ballroom, and one night the regular DJ didn’t turn up so the manager asked me to stand in, just play the records and talk a bit in between.

“The ballroom was a huge place – it used to be a palace of varieties, with a balcony and a huge dance floor. Four nights a week, there would have between 800 and 1,000 teenagers down there – so it was a big audience. I was a bit nervous about going on, so I had a few drinks – and then decided to make a memorable entrance by jumping from the balcony onto the stage.

“It went down quite well – as did the set I played that night. When the other guy turned up again at the end of the week, the punters decided they preferred my style, so he got the sack and I got the job: four nights a week for £16. I gave up the cleaning job and kept on with the DJ-ing, doing various daft things on stage that earned me the nickname ‘Mad Mick’.

“I had one of the first mobile discos in the country, and during the summer of 1970 a local agent called me to ask if I would be available to compare and DJ at an outdoor gig on a Dairy Farm in the village of Pilton – I believe the fee for the day was to be £20.

“He suggested we drive down the next day and offer some advice on bands and entertainment that should be booked for the upcoming event. Over tea and homemade cake in the farmhouse kitchen, Michael and Jean Eavis told us of their vision for a “day’s festival” and the organisation it would require. It became obvious that Michael’s perception of the day was a little different to my own, in terms of some of the bands he wanted to book. I believe a compromise of sorts was reached and we left the farm wishing them the best of luck. I remember thinking at the time what genuine people they were, but I had serious doubts if they could pull it off. I then went back to my club dates and the agent went back to his office and over the next few weeks forgot about it until the day itself.

“So much has been written about that first festival, mostly though a haze of nostalgia. I can only relate the experience from a performer’s view of the day and it’s a little sketchy at that – after all it was half a century ago and for the vast majority of us, it was just another gig.

“My wife Rose and I left home that morning with wine and sandwiches, as we were determined to treat this as a kind of hippy garden fete and enjoy ourselves. There were no traffic jams, just a few trucks parked at the back of a crude makeshift stage with a tarpaulin cover. The record decks and sound system were being set up and a smallish crowd was beginning to gather. To my surprise the poster for the festival didn’t correspond with some of the bands that were arriving. As expected, it was all very laid-back and somehow a running order of sorts was worked out. I played a diverse and eclectic mix of music ranging from Ska, Psychedelic Folk, Soul, R&B, as well as some trendy album tracks. I also remember playing a couple of Scottish reels and even Teddy Bears Picnic! There was also a chaotic limbo contest on stage with half a dozen spaced out hippies just to add fun to the proceedings. As well as introducing the bands, there were also the regular shout-outs etc., and to be honest everyone seemed to be responsive and enjoying themselves. As for security, I can’t recall any apart from two rather bored policemen from Shepton Mallet Station who made a brief appearance.

“I have been asked many times who was the first band to take the stage that day but I really can’t remember, although I have a strong feeling it was Stackridge. However I do recollect the first record I played, which I still have today and that was It’s All Over Now by The Valentinos – not the Stones’ version, but the original, 1964 Soul City label recording with Bobby Womack. What a great song.

“As for the exact running order, that again is lost in the mists of time. As well as Stackridge, I just about remember Malsulami, Duster Bennett, Keith Christmas, Sam Apple Pie, Quintessence, Al Stewart and The Alan Bown Set, an amazing soul band whose singer Jess Roden had left and was replaced by their new vocalist and front man, a young Robert Palmer who was making his first festival appearance.

“There were also light shows and films that were advertised – I can’t recall any of those, but I do remember the loos and a drench at the top of the field for the gents. The day was also supposed to have a back-up compere, but alas he never turned up, so I did the whole day. I do vaguely remember a guy helping out with some form of organisation – his name was Rosco and bizarrely he wore a long black wig.

“The headline act The Kinks, were another band to pull out and they were replaced with a semi-acoustic set by Marc Bolan’s Tyrannosaurus Rex, not to be confused with T Rex. Marc renamed them the next week and released Ride a White Swan, which was arguably the birth of Glam Rock. I had followed his career from the days of Johns Children, a sharp little band who were way ahead of their time. He was an interesting guy, oozing self-confidence, hungry for fame and extremely careful with his money. Ironically, a year earlier we worked a gig at Glastonbury Town Hall – the rest of us that night walked up Glastonbury Tor, but Marc declined, preferring to snooze in the car. After they finished their set, the lights went out and the vast majority left for home. We were home at 12.30 having really enjoyed the day, yet at the same time wondering how I and all the bands were ever going to get paid. But, hey, it was a good gig, albeit a strange one, and I can’t believe anyone thought for a second there would ever be another – how wrong we were!

“In retrospect, 1970 was a crossroads for music and there now appeared to be a loss of direction. The 1960s generated a revolution in contemporary music, changing the monochrome world of pop into vivid colour. We were now entering a period of musical transition. We had left the world of sixties love-ins and flower power, The Beatles had split and Jimi Hendrix had recently died and we were now into a new decade. Looking back, I feel this was in many ways reflected in the festival itself, a feeling of expectation as to what the future held musically.

“These days that first festival would be regarded as a little crude, possibly naïve – that said, it was part of our history, never to be forgotten and is remembered with genuine affection. The wonderful thing about music is that it’s like a time machine; it can take you back to a moment in time like nothing else can. I suppose future generations who visit those fields will talk about what happened there. All the talent, all the joy, all that music, buried deep in the soil of a Somerset landscape. Those that come after us may well put their ear to the ground and maybe, if they’re lucky, perhaps hear a faint sound from the past – the sound of music.

“Clearly it would have been great to play a set at the 50th as I really enjoyed returning for the 40th anniversary in 2010 but this year everything will be digital and broadcast.”

Glastonbury Special: Tune in to hear Mick Ringham chat to Lauren Laverne on her ‘Desert Island Disco’ show on Friday 26 June from 10am.

A selection Mick’s playlist at the first-ever Glasto