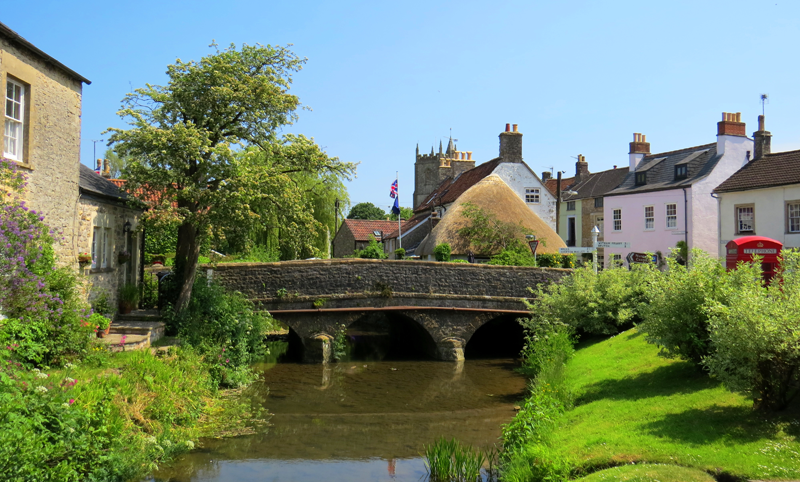 The path less travelled: Around and About Bath

One could argue that tourists are rather spoiled when they visit Bath, as there is a plethora of local tour groups to help visitors explore the city and the neighbouring areas. And while there is something rather handy about hop-on, hop-off types of tours, these often feel quite regimented and can miss out important historical or local facts that tour-goers are looking for.

This is certainly not the case with new local tour company Around and About Bath, headed by ex-history and politics teacher turned tour guide extraordinaire Jules Mittra. Jules takes groups of up to eight on a local tour of the Somerset countryside, stopping along the way at some of England’s most picturesque villages and giving his guests a superb insight into the history of the area.

This is a personal tour like no other, where guests can get to know each other and where Jules is happy to accommodate anyone’s particular interests and answer any questions. And while one may assume that this kind of tour would only appeal to tourists, if you are a Bath resident like me then you will certainly walk away feeling like your knowledge of the local area has been enriched and you have explored places you have never seen or heard of before – Jules doesn’t call this the Stonehenge and Secret Somerset tour for nothing.

And in order to retain the element of wonder for Around and About Bath participants, Jules likes to keep most of the locations of the tour under wraps so guests are surprised when they arrive at the next village. So, just to keep you on your toes, we won’t be revealing any locations (apart from Stonehenge of course, as it’s in the title of the tour) that we visited during our recent tour. . .

Beginning our day in the city centre, the group of guests and I jumped into Jules’ mini van (which is rather roomier and more comfortable than usual tourist transport), and we headed out of the city via Great Pulteney Street, allowing us one last look at the city’s marvellous architecture before exploring the green countryside.

First stop on the tour was a small village where we admired at the rolling scenery and visited one of the oldest pubs in England, originating from the 1390s. While this drinking house may date back to the time of Richard II, its connection with the 17th century fascinating.

From the offset you can tell that Jules has certainly done his research. Using portraits, woodcuts, artefacts and readings from the time, he revealed the pub’s extraordinary connections with the Restoration diarist Samuel Pepys and the Duke of Monmouth – Charles II’s illegitimate son who led a rebellion against his uncle, James II, in 1685.

Sitting in the space where these historical characters once sat was remarkable, and Jules’ storytelling brought their lives and experiences to life.

After a cup of coffee, Jules takes his guests to Stonehenge where they are allowed straight past the ticket queues and begin their personal tour around the site and exhibition centre. No audio guides are needed here as Jules’ knowledge of the site and the theories behind it is extensive and informative. Guests are able to wander around Stonehenge at their own leisure, or can be guided along the way by Jules – either way, he’s flexible about what his guests would like to do.

Next stop was a village that has been referred to by many, including Radio 4, as the prettiest village in the country – and it certainly lives up to its reputation. With its quaint cottages, small streets filled with flowerbeds and a stream trickling through, you would have never have thought this area was once under threat of being torn down after being considered a slum in the early 20th century.

Right at the heart of this quiet village is its very own castle that was built in the 1370s by a local knight, Sir John de la Mare, now maintained by English Heritage and is free to enter. While there is a board outside the entrance with plenty of information about the fortress, Jules’ knowledge about its construction, the part it played during the Civil War and the people who once lived there surpasses this. As we explored the castle, some of the other visitors were even asking if they could listen in on Jules’ tales, especially a particularly haunting tale about a local murder in the 19th century and the investigation around it that gripped Victorian Britain.

Before we stopped off at our next village, Jules pointed out a particular medieval manor and told us about its unexpected links to Nelson Mandela and the end of apartheid – you would never expect a secluded building in the middle of the Somerset countryside to have connections with such a significant part of 20th century history.

After a spot of lunch at a local pub (the fish and chips went down very well), Jules showed us around the medieval village before visiting the church. It was here that we discovered the local landowners’ connections with some of the most prominent names from the 20th century, including the Bloomsbury Group, Herbert Asquith and even Winston Churchill.

To passersby, this church may seem like any country church across the UK. However, what Jules made clear to the group is its strong connection with the First World War. Inside is a memorial dedicated to Edward Horner, the son of the landowner at the time who died in battle at Cambrai in 1917. This particular memorial was designed by Edwin Lutyens, who later went on to design The Cenotaph in London.

As Jules took us into the churchyard, he went into greater detail about the First World War and described how the literature of the time was changing to reflect the horrors of warfare. Little did we know that beside us, surrounded by faded paper poppies and wooden crosses, was the grave of the war poet Siegfried Sassoon. Standing next to his grave, Jules played us a recording of Sassoon reading one of his poems about trench warfare, making this a particularly poignant part of the tour which seemed wholly appropriate in this centenary year of the conflict.

To conclude the tour, we explored a secret garden and enjoyed a cup of tea and a selection of cakes overlooking the countryside in the glorious sunshine. This serene end to the tour perfectly reflected the feeling throughout the whole day – rather than being rushed around from place to place and having to stick to time restrictions, it was relaxed, enjoyable and allowed us to take the time to absorb the surroundings and the enlightening stories Jules had to tell us about the area.

This tour promises to allow guests to discover the hidden treasures of Somerset’s countryside, and it certainly delivers.

Tours are £99 per person in October and November (usually £120), which includes all refreshments, lunch and admission to Stonehenge. Get an extra 10% off by entering ‘Bath Magazine’ into the discount box at the checkout online.

Private tours are also available from £250 per group and can be based on a variety of different themes – whether it’s a local food tour, a snoop around the film sets of the likes of Poldark and Wolf Hall, or a visit to the vast English countryside, Jules is incredibly flexible about meeting his group’s wishes. Tours are suitable for over 12s.