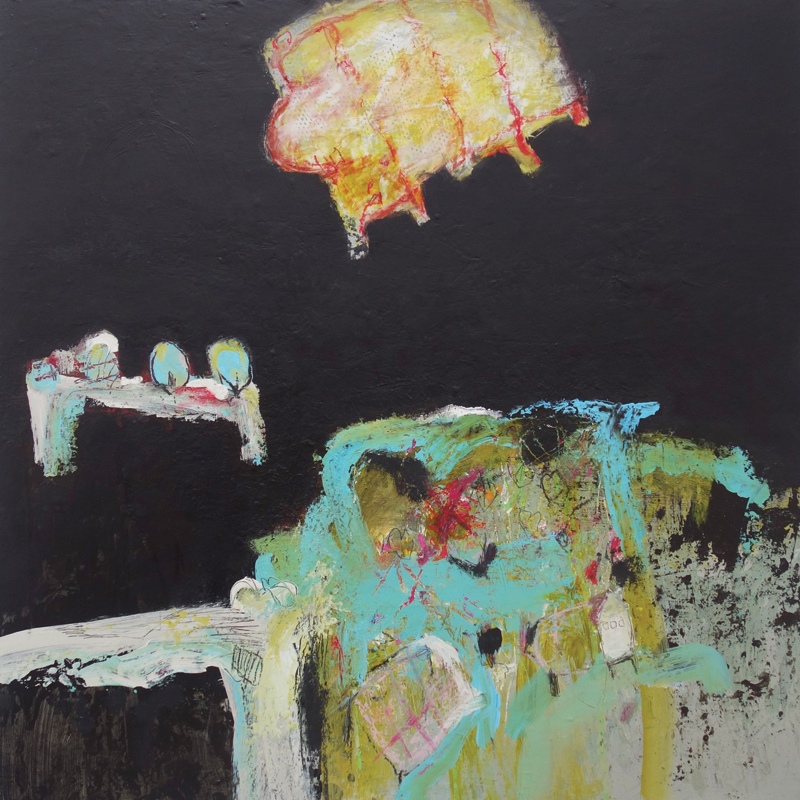 Midge Naylor is a painter whose work sparkles with energetic imagination. Eschewing any physical visual references, her inspiration is drawn from her memories of the Scottish landscapes of her childhood, says Emma Clegg

Painters who depict the landscape around them can spend a lifetime exploring their subjects. For Claude Monet it was plein air landscapes in his Giverny garden; for Paul Gaugin it was the rich and glowing hues of the islands of West Polynesia; for John Constable it was the glorification of nature in his Sussex home in Dedham Vale.

Landscapes in contemporary painting – with its compulsion to find a new vocabulary – may feel less accessible because we don’t always recognise the story. But painter Midge Naylor’s artistic imagination has such a connection, indelibly linked to the fishing and mining community where she grew up and the landscape of her childhood, the Lammermuir Hills in East Lothian. “I have such strong memories of looking out to sea in my mum’s house in East Lothian. That is what haunts me. And these are the landscapes of my imagination,” she says.

“Everything I do is a result of a visual experience that’s stored inside me. If I think of it now I can see the landscape quite clearly that I used to look out on when I was a child.”

Midge wanted to go to art school when she was 18, but she was persuaded not to by her mother. “My mum was terrified that I would become unemployable, so I didn’t go.” So she worked for years as a commercial painter and decorator in film and television, including productions such as Casualty when it was filmed in Bristol, which she tells me firmly was not a creative role, it just paid the bills. So her art education started later, when she made her way to study Fine Art at UWE in Bristol in the early 1990s when she was living in Bath and her daughter first started school. “Art college is a wonderful thing, because it gives you an overview of what you are doing while you are doing it, but my work was completely different then because I was fascinated by figurative art.”

The definitive spur for the creative journey she has been on since came during a visit to St Ives, Midge says. “Even as a mature student I was quite naïve and being at art school brought me up short. So I came out after four years and went straight back to work and nothing much happened for a few years. And then suddenly I had this revelation in St Ives when I saw this painting by Peter Lanyon, the Cornish artist, and it just clicked with me, and something set me off. And I thought ‘Right I’m going to go back to work’, and I started working again part time. I’ve had a studio at BV Studios since it opened in 2010.”

Midge remembers one of her art teachers at school telling her that she had an exceptional visual imagination. “I didn’t know what he was talking about then,” she explains. “Now I realise that I have. The way I paint now is driven by the materials I use, and it’s based on the East Lothian landscape that I grew up in. I start painting and I have no idea what’s going to happen and I work the paint in layers driven by the paint and by mark-making.”

This creative instinct and almost mystical process can be seen clearly in Midge’s paintings, with their fluid marks and amorphous, textured brushwork and palette knife applications, where you see the energy of the broad landscape but also the gauzy, scratched impressions of trees, boats, structures, pieces of furniture. Sometimes they are buried in the landscape of the canvas; at other times they sit centre stage.

“I begin with a relaxed application of paint using a palette knife and brushes then introduce improvised marks – scratched, scraped, rubbed and brushed and often smoothed with a gloved hand. Drawing into the wet paint with charcoal, graphite and oil bars sees the emergence of figurative motifs which are developed through an extended dialogue with the painting itself, which hovers between abstract and figuration a lot of the time,” she says.

“Markmaking is very important in the construction of an artwork. For me the most important thing is layering and form and I will keep layering and changing until it feels as if it works. Colour and surface are important, too. And you get beautiful marks and effects by breaking through the surface by scraping. My canvases are psychological landscapes, painting using landscape as a state of being.”

Midge’s work has an established niche; she was elected into the Bath Society of Artists and has won ‘Best Regional Artist Award’ at the Royal West of England Academy where she became an Academician in 2012. During lockdown, Midge explains, Instagram has been the stand-out forum for artists to sell their work, but this hasn’t been a natural transition for her. “Generally selling art is all about baring your soul to the public, and a lot of people do that on Instagram. I’m just not keen on that. I put pictures up and I get lots of likes but I don’t expose myself that much. Sometimes it feels as if buyers want to own you a little bit, but that’s natural if they like the work.”

Perhaps this anti let’s-confess-all approach is needed to keep the sweeping mystique of this work intact. Bring back the subtlety, the unexplained, is the rally cry. In the words of Vanessa Lacey, the owner of the Irving Contemporary gallery in Oxford where Midge sells her work, “These paintings defy any sort of literal reading; even when there is a landscape within the picture, it does not abide by the rules of the real world, since here we are in a different landscape of the psyche.”

Midge Naylor’s painting Inside Edge is included in the Bath Society of Artists 116th Annual Exhibition at the Victoria Art Gallery, from 2 October – 20 November; midgenaylor.co.uk; irvingcontemporary.com