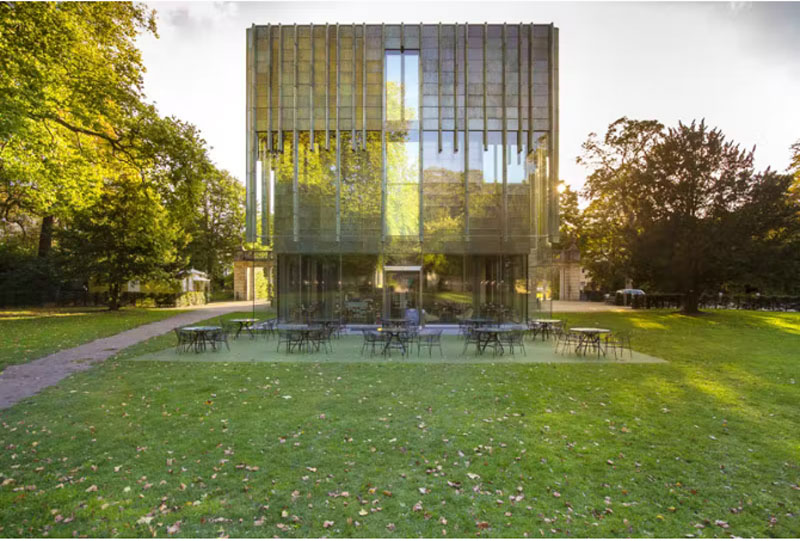 King Arthur, Guy Fawkes, Julie Andrews and Toad all make an appearance at The Garden Theatre Festival in the gardens of the Holburne this summer. Emma Clegg chats to Creative Director Matt Emeny about what’s in store.

The Garden Theatre Festival first made an appearance in 2020 when theatre producer Matt Emeny brought two nights of outdoor theatre to the city, one in the gardens of the Holburne Museum and one at the American Museum & Gardens. He did this by collaborating with Three Inch Fools, an innovative touring theatre company known for their fast-paced and musically driven approach. At this time, scarcely out of lockdown, Matt was determined to find a way of bringing theatre back, and open-air performances felt the best way to stay safe. “I was super keen to bring art back to the city, and outdoor art was always going to be the way to do it,” says Matt.

In 2021 the open-air theatre festival returned to the Holburne, with five nights of performance and it’s shifted up another gear this summer with 13 different productions and over 20 performances in the gardens of the Holburne from 29 July – 13 August. The theatrical atmosphere of many of the pieces – established from the beginning with the work of Three Inch Fools who this year are performing The Gunpowder Plot and Twelfth Night – is high energy, with fast-paced action, comedy, songs, music, jokes, and multi-roling. Matt explains that the approach to the festival has always been as much about packaging an experience for visitors as about bringing theatre to outdoor spaces.

“It was the environment that we were creating – a garden location where people could bring their picnics and have a wonderful time,” explains Matt. “This is what we are continuing to do with The Garden Theatre Company – come and see a brilliant show but also come for the experience and atmosphere. It’s feel-good, it’s not pretentious, you can bring your own food and booze, or you can buy food and drink from our bar.”

Matt has a theory about how our psychology changed in lockdown, driving a new love for outdoor theatre. “When we were only able to meet in a group of six, outside, perhaps around a campfire, we almost went back to prehistoric times, and the outdoor ritual of telling stories around a fire. And that ritual is easy to pass on with an outdoor theatre experience, with people gathering in outdoor spaces in town squares or parks or green spaces and hearing entertaining stories.

“That’s been a real plus for us outdoor theatre makers because we’ve always been the ugly cousin of the theatre world. Because of the way we work, our budgets are limited, we don’t have all the glamour and lights of an indoor theatre, and actors sometimes need to set up the stages in the pouring rain. But our big advantage is that we go into communities – we go to that village or town and we go into people’s spaces, where they feel comfortable, and give them a family experience.”

The productions on offer this year have a strong regional emphasis: Matt says, “We are really keen not to import all our work from London, so like to focus on artists and companies from the south west. There is a fresh take on Wind in the Willows by Matt’s outdoor theatre company Calf2Cow, a hilarious re-telling of everybody’s favourite woodland adventure with a rock ’n’ roll rhythm; and King Arthur by The Last Baguette theatre company, who are based in Corsham, taking on the Arthurian Legend with knights, wizards, mist and magic, along with physical comedy and plenty of jokes. Matt says about King Arthur, “This is a silly family clowning show, fun for all ages, big kids and small. And that is the vibe we’re going for. I really want to create work that makes adults feel like children again.”

Another production at the festival is Much Ado About Murder by Heartbreak Productions, an original murder mystery that sets five suspects under the spotlight, and asks the audience to help find the answers; and Julie Madly Deeply by Sarah-Louise Young who is joined at the piano by Michael Roulston. The audience will be treated to Julie’s songs from musicals including Mary Poppins, The Sound of Music and My Fair Lady and these are intertwined with stories and anecdotes about Andrews’ own life. This is one of two performances by Sarah-Louise (the other, also performed at this festival) that she is taking to the Edinburgh Festival in August.

There is a thrust stage for the use of the visiting productions, which was designed and created by students from Bath Spa University, and some companies bring their own stages. This includes LASTheatre who are doing one of the children’s shows, The Rascally Dinner – they are coming with a huge caravan, which unfolds to create a kitchen with big monsters emerging from it.

Ticket holders can bring their own blankets, cushions and camping chairs, and come with picnics and drinks or get refreshments from the bar. They can also relax in the Holburne’s beautiful gardens after evening performances, with the bar open until 10pm, and there are also some evening, pop-up music acts on certain dates. Premier ticket holders can access the Holburne 30 minutes before main doors open, with prosecco or soft drinks, and luxury nibbles included.

The Garden Theatre Festival runs from 29 July – 13 August, in the gardens of the Holburne Museum; gardentheatrefest.co.uk

THE GARDEN THEATRE FESTIVAL PROGRAMME AT THE HOLBURNE

Julie Madly Deeply by Sarah-Louise Young | 29 July, 2pm
This charming yet cheeky cabaret takes an engaging look at fame and fandom with Julie Andrews’ songs from musicals intertwined with stories about her life. £16/£11

An Evening without Kate Bush by Sarah-Louise Young | 29 July, 7pm
Acclaimed performer Sarah-Louise Young and theatre maker Russell Lucas explore the music and mythology of one of the most influential voices in British music. £16/£11

The Importance of Being Earnest by Slapstick Picnic | 31 July, 6pm
Join Slapstick Picnic’s summer tea party where over tea and cucumber sandwiches, you will see Oscar Wilde’s classic play of manners, affairs and handbags performed by two entertainers. £16/£11

Wind in the Willows by Calf2Cow | 2–6 August, 2pm, 6pm, 7pm.
Join Mole, Ratty and Badger in a floor stomping, live music, hilarious re-telling of this woodland adventure as they save Toad from deep trouble. £16/£11

King Arthur by The Last Baguette theatre company | 7 August, 2pm, 7pm
An anarchic and anachronistic re-telling of the Arthurian Legend with live music, physical comedy and lo-fi acrobatics. And some silly jokes…£16/£11

Charlie Locke and the Quest for Confidence | 8 August, 2pm
Join Charlie and (his) Brain as they navigate through primary school life, friendships and the beauty of finding a voice. Come, see and hear Charlie’s tale and his quest for confidence! Suitable for children. 5+, £12

Misfits by Fourth Monkey | 8 August, 7pm
Here is a collection of stories of people who don’t fit in, stories about people you might consider weird, and stories that colour outside of the lines. This evening is brought to you by the MA Collaborative Theatre Students at Fourth Monkey. £10/£8

Twelfth Night by The Three Inch Fools | 9 August, 7pm
Prepare for an evening of mischief and hilarity, as five actors present an inventive take on this rip-roaring comedy, fit for all the family. Expect fast-paced drama, endless costume changes, and much music-making along the way! £16/£11

The Gunpowder Plot by The Three Inch Fools | 10 August, 2pm, 7pm
Cue an explosive evening of short fuses and tall tales, as five actors try to pull off the most infamous conspiracy in history. £16/£11

Much Ado About Murder by Heartbreak Productions | 11 August, 7pm
This original murder mystery will set five suspects under the spotlight, and it will depend on the audience to find answers. Who was lurking in the corridor carrying a candlestick? When did the third gunshot go off? £16/£11

The Beast Will Rise by Philip Ridley | 12 August, 7pm
An evening of two monologues (Cactus and Star) written in lockdown by playwright Philip Ridley, directed by Wiebke Green. £16/£11

The Rascally Dinner by LASTheatre | 12 August, 11.30am
Cook up a stink as part of Rufus Skumskins O’Parsleys’ kitchen crew or bring a pot to bang and ward off evil cakes in this fun-filled, messy performance about food. For ages 5+, £12