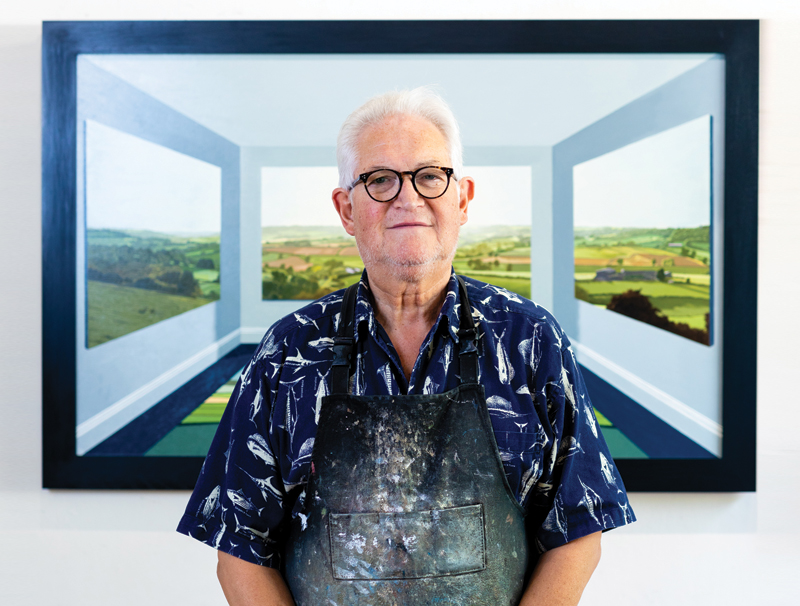 Artist Nick Cudworth has been part of Bath’s artistic landscape for over 20 years. Ahead of his exhibition at Victoria Art Gallery, Emma Clegg finds out about the strands that have influenced his brand of painted artistry

Graphics student, postman, blues/rock musician, a stint working in a geriatric hospital and years creating artwork for advertising – Bath artist Nick Cudworth has had a colourful working life. The colours remain, but now it’s about oil paint on canvas. Nick’s style of artistic realism has wide perameters, incorporating portraits, landscapes and still life. He opened his own gallery in Bath in 1999 as an exhibition space and studio and has shown in galleries throughout the world, including London, Milan, Winnipeg and New York.

Nick comes from a working class town in Derby, and his family had strong artistic roots. “My dad worked as a commercial artist at a local printers,” he explains. “He was always using brushes and paint and he would go to work and conjure up these images of pots of vegetables and fruit and he’d design the lettering around them. It was all done with a brush. That was the way it was then. I always loved that technical side of it. So a massive part of what I do comes from my father.”

Nick studied graphics at Chelsea School of Art in the mid-60s, a heady time and place to be an art student. “I went from Derby to Chelsea, and it was a brilliant move,” says Nick. As a student, he met and became friends with fellow art student and singer/ songwriter Kevin Coyne. “Kevin was a great mentor to me. He was a driving force – it was a wonderful, wild time, and Kevin and I got on because I could play piano and guitar. He was this phenomenally gifted singer, the first real musician that I met. It felt real. He was doing painting and he knew so much about music. And painting and music are so connected.” 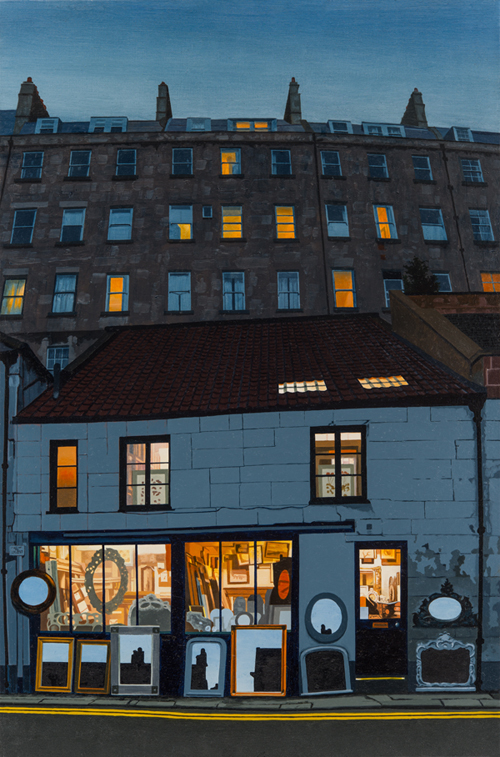 Through the Looking Glass, Nick Cudworth. Photograph by Peter Stone.

With Nick on keyboard and guitar, they formed a blues-rock quartet called Siren – the band, encouraged by John Peel, was contracted to Peel’s Dandelion record company and the group brought out two singles and two albums.

This was a definitive time, but after graduating Nick changed focus, using a scholarship to travel to America where he visited a number of art schools. “That’s when I noticed, going around America, all these realist painters and drawers, pencil drawings. That locked into what I was doing. The subject matter was very in tune with the American realist period of the late ’60s and early ’70s. So I got into highly proficient, technical realist drawing.”

In the early ’70s, after several years working in a geriatric hospital (“I felt it was like paying your dues somehow”), Nick was exhibiting regularly in London with the Nicholas Treadwell gallery, Superhumanism, while also working as a postman, which gave him time to draw. Then, in the ’80s he worked as an artist producing commercial work for advertising. Realist art was much in demand at the time, but the commissions were pressurised, with short turnaround times. “Then I began to do my own sort of work,” Nick explains. “From that point I was gradually pulling away from the advertising world.”

“I am like a hybrid that is outside of the system. I am actually an outsider. I like that”

“In the late ’80s I wanted to do some big paintings,” says Nick. “I like to have a project to start a new technique. And the technique comes along to make that happen. You can’t force that in life – it evolves naturally.”

After years in Stroud, Nick and his wife Jenny moved to Bath in 1998. “I had always thought Bath was way out of our league, to be honest. I loved it, I’d always loved it.” At the time Nick was selling his work principally in London and describes himself as “a London artist living in Bath,” but the Bath effect was inevitably going to make itself felt. “I wasn’t doing anything to do with Bath for a while. But you are going to get influenced by your environment – it will become part of your vision.”

And so it has turned out. Nick’s work in Bath includes linear graphic statements focusing on subjects from Walcot Steps to Bath Abbey and local landscapes with resonant, velvety statements of sky often puntuated with transformative sheets of light. Nick never wanted to be just another painter painting in Bath, and he absolutely isn’t. One of his techniques is to play with planes and layers, often painting pictures of paintings in an interior where it’s hard to pin down what is a flat surface and what is three-dimensional. He takes liberties, using real places and reinventing them, compiling features from different historial periods in a view of Pulteney Bridge, changing the height of the colonnades around the Roman Baths to give edge to his image of Bath Abbey. It is a reinvention, a repurposing, with a familiar core.

Nick’s forthcoming exhibition at the Victoria Art Gallery, from 1 December to 17 February, focuses on a subject that has fascinated him for years – night paintings. The show includes more than 20 of his Bath night paintings, produced as giclée prints on stretched canvas. “It all started with an idea I had with Walcot Parade,” he explains. “It was a great façade, but it wasn’t enough. So I thought it would be great to do it at night. I developed that idea using techniques within the oil painting tradition that were quite unique – glazing in such a way that the whole thing becomes really vibrant.”

“My work with oil paints is constantly changing, because skies are involved. The definition of the buildings against the sky sets the pattern for the sky. The windows are put on last with pure, transparent Indian yellows which are really vibrant. The only way you can do that is by glazing, not painting.”

“I didn’t come to art from a fine art background,” says Nick, “and having been involved with it from many different kinds of areas, I am like a hybrid that is outside of the system. I am actually an outsider. I like that.”