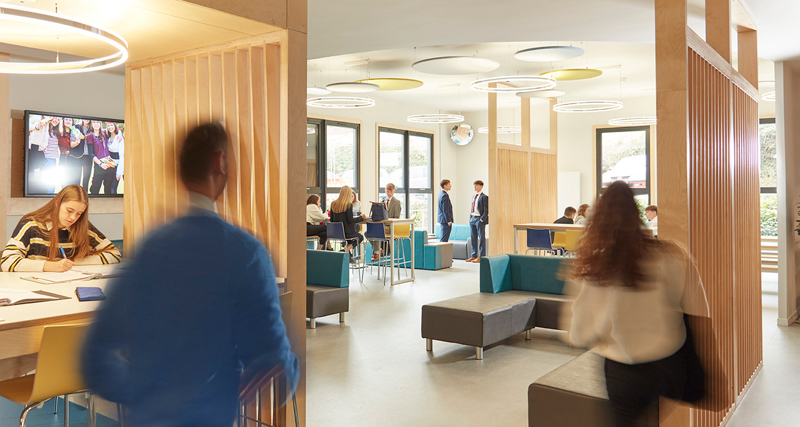 This Autumn has seen several major new facilities arrive at King Edward’s, beginning with the newly extended and refurbished Sixth Form Centre which opened at the start of term.

Working with local architects, Mitchell Eley Gould, KES Sixth Formers and staff were instrumental in developing plans for the new space, with suggestions being put forward for a redesigned work environment and social space. Pupils were keen that the new centre echoed the environments typically found at universities and was further able to support different workstyles and study needs.

As a result, the former large common room style space has been zoned into different areas.  An ‘inhabited’ wall now runs through the middle of the room defining the separation between social and study spaces and provides recessed alcoves for small groups to use, seating for individuals, built-in lockers and glazed doors to the adjacent quiet room.

The café area and surrounding spaces all provide group casual work and social spaces and are surrounded by furnished areas that provide an identity to each space, with lighting and suspended acoustic panels reflecting the change of character of each area.

There are hidden stories in the design as well, such as the new shelving between the main entrance and the café being modelled on the proportions of Corbusier’s modular man using a Fibonacci progression.

The new Sixth Form Centre has met with unanimous praise, with pupils appreciating both the contemporary redesign and vibrant atmosphere that the refurbishment has achieved.

Following hard on the heels of the new Sixth Form Centre a new, two-storey Modern Foreign Languages Centre has just opened its doors.

The new £2m MFL facility, sitting adjacent to the Sixth Form Centre, allows a more flexible approach to teaching, particularly when helping pupils to develop their listening and speaking skills, and incorporates seven new classrooms, including language labs and smaller teaching spaces, as well as a new locker area and office space. New classroom equipment and furniture complete the project.

The study of languages at KES continues to flourish, with over a third of GCSE pupils typically studying more than one language, including classical languages, and between a fifth and one-quarter of pupils choosing to study languages at A-Level.

STEM subjects are on the rise in schools and have certainly been in evidence at King Edward’s over the last ten years. For science subjects, this means that it is now more important than ever to offer high-quality learning spaces for pupils. With this in mind, work was completed in August to refit two Chemistry laboratories in the Q Block. The rows of ‘traditional’ wooden benching have been replaced by a more ‘open plan’ aspect, alongside new ICT provision and fume cupboards. The new laboratories provide the School with some first-class facilities and underpin the ambitious growth plans in science teaching and resources, which will see the arrival of more new and refitted laboratories in the future.

New all-weather pitch at the Pre-Prep and Nursery

The start of the term saw a new all-weather pitch open at the Pre-Prep, replacing the grassed area at the bottom of the grounds. The youngest children now have a year-round weatherproof space suitable for both PE lessons and play.  Further enhancements at the Weston Lane site include a new wooden outdoor play system which has been a big hit with Pre-Prep children, rapidly becoming the focus of play at break and lunchtimes.